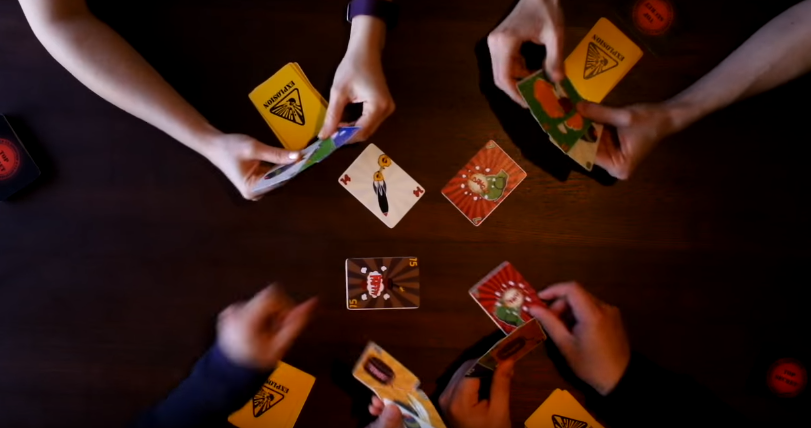 There has been a resurgence in recent months for quick-start games. Usually played at the beginning or end of a tabletop gaming session, these easy-to-learn/carry/play affairs are enjoyable little breaks in what can be quite serious gameplay that offer a change of pace or an introduction to the noob gamer.

Another use of these games, such as Love Letter, Zombie Dice, and Hey! That’s My Fish are ice breakers that help build relationships between the players and test friendships in a fun and challenging way.

Peekaboom (not to be confused with the “ESP” game of the same name) is no exception to this genre. With its blend of fast paced action and devious game mechanics, rounds can be over in seconds, with games lasting minutes. With the addition to the fact that this is a card game, Players aren’t required keep track of a million pieces which lends itself to the speediness of the gameplay.

You have two decks to play with. One is a set of numbered, pictured, coloured cards, the other contains instructions. Each team take one of the instructions and show it among themselves. This is how you “detonate” your bomb after building it. The method by which you build the bomb is by acquiring a “three of a kind” with the other deck (3 colours/numbers/ pictures). There are no turns to take, and your hand only consists of 3 cards, leading to a frantic swapping and discarding. When you have “three of a kind” you can then carry out your instruction (I.e “rub your belly”), in the hope your team mate will spot this and yell the word “Boom”, in which you win the round.

The opposite team can counter this if they spot the gesture first and yell “snip”. This helps to builds the tension that makes the game really fun to play. The only downfalls are the packaging being sparce, and there being no way included to track the score. Maybe for the special edition?

All in all, I, and my gaming group,  enjoyed playing peekaboom and it helped break up long gaming sessions with fast paced, some times intense, and simple play.

Definarely worth having as a part of your gaming collection and a game my self and my friends will play again.

You can find out more about Peekaboom here: