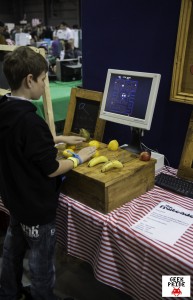 “Just push the Pear to start”.

That was one of the more unusual phrases I had said to me at this year’s Play Expo. Sadly, even fruit-based control pads must come to an end; and so ends the end of a fantastic weekend of games, talks, and cosplay at Play Expo in Manchester! Geek Pride attended both days over the weekend, and throughout this week, we will be giving you hands on previews and first impressions of upcoming games in the next 6 months, so keep watching for more info.

As for the above statement, I was trialling a very special version of Pacman at the time, shown by a company called the Video Game Carnival, known for hosting quirky video game events. The process was basically the same, except instead of using a joystick, I used…fruit. Pear to start, and 4 lemons for the d-pad. “It’s pretty straight forward, actually”, the ringmaster said. “The wires running into the fruit pickup subtle changes in the resistances of the fruits when pressed”. Very interesting, I thought, as I hit the wrong lemon and wakka’d my way right into Clyde. To hell with this, I thought, I’m going to play some pinball. 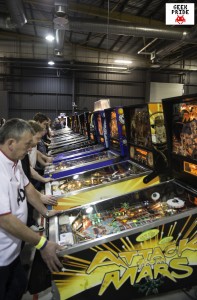 The 40 or so pinball machines, as well as the carnival, was all part of Play Expo’s traditional re.play area; what the expo was founded on. Crammed with classic consoles, from ZX Spectrums and Commodore 64s, and SNES’s and Playstations and everything in between, re.play prides itself on having a huge library of classic 8 and 16 bit games to feed every gamer’s nostalgia, and whatever wasn’t available to play on the show floor, was available to buy from one of the many classic game stores and collector’s stands lining the floor.

This is not all that was to offer, though, Play Expo has had a change of location this year to Manchester’s Event City, to cater for the vastly increased coverage it was offering, and the conference centre was heaving, as thousands of gamers flooded in. It wasn’t surprising, considering this is now being ticketed as the UK’s only expo to cater from gamers of every walk of life; and it certainly did. Apart from the re.play area, the pro.play area was immensely popular as well, as the European Gaming League hosted Pro gaming tournaments for individuals and teams alike, and streamed it live across the world. No matter where I was on the show floor, you could always hear the odd shout of frustration or cheer of victory, and personally, living in Manchester, I felt quite proud that there was such a good turnout for all the tournaments, from rookies to professional and experienced teams, everyone truly got into the spirit of things, and it was great to see geek culture out in force in the UK. 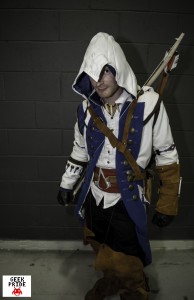 This was shown by the strong showing from the cos.play section as well. Hosted by Hyper Japan, this was an area devoted to everything Japan, and everything cosplay. Traditionally, cosplay has not had that strong of a showing in Britain, but on both days, I saw some extremely well put together costumes, and again, it was exciting to see the amount of people going all out and completely fabricating their costumes from scratch. There was a very impressive Connor from Assassin’s Creed on the first day, and Death from Darksiders 2 on the second day, but many more people that clearly did it just for the fun as well. 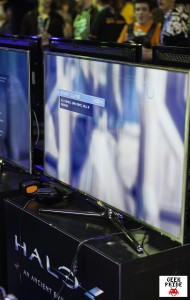 Of course, there was the brand new now.play area as well, showcasing many different genres of upcoming games, but two areas in particular, completely stole the show. The Halo 4 multiplayer consoles always had a huge crowd surrounding them, as would be expected, and the queues for Nintendo’s Wii-U area was often up to 2 hours long. While this was obviously great news for Nintendo, plenty of people I talked to said they did not even go to see Nintendo’s new console, as they felt the wait was just too long.

Unfortunately, this was not the only wait that attendees had to put up with. It was the feeling in the press office that the move to Event City might not have been as smooth as the organisers might have hoped. On the first day, the doors opened almost 20 minutes late, and some people faced a wait of up to 2 and a half hours just to get in. There was also due to be talks from developers and industry professionals all weekend long, however, hardly any happened on the first day, and to our trepidation, nothing was confirmed on the second day, either. However, we did manage to attend a very interesting Q & A session with Mike Montgomery, MD and Co founder of legendary UK developers the Bitmap Brothers.

All in all, most of the press, and most attendees that I spoke to myself agree that it was a fantastic weekend, and Play Expo has clearly broadened their horizons and obviously put a lot of effort into their marketing and a lot of thought into what they can offer the consumer. Geek Pride certainly had a fantastic time not just previewing the latest and upcoming games, but we also loved a chance to get nostalgic with some truly legendary consoles and titles, as well as watch pro gaming teams with awe, and of course snap some shots of fantastic cosplay costumes! We highly recommend you come along and join us next year and experience the UK gaming scene for yourself; at a price of £8.80 for a day ticket, there are few better ways to spend less than a tenner for a full day of entertainment. We still have lots of news and info to bring you, and will definitely be attending next year when it comes around again; we hope to see you there!

Matt, 24 last time he checked, was born and raised in Manchester. A self-styled geek; when he isn't annoying his other half by fitting in as much gaming time as he possibly can, he can be found getting his fix of Fantasy and Sci-Fi elsewhere by reading, writing, or watching TV Series and Films. He is also a Michelin 3-Starred Chef in his spare time, and can be found experimenting in the kitchen, and generally poisoning his friends with obscure and mysterious dishes.
You might also like
amigaassassins creedbreaking