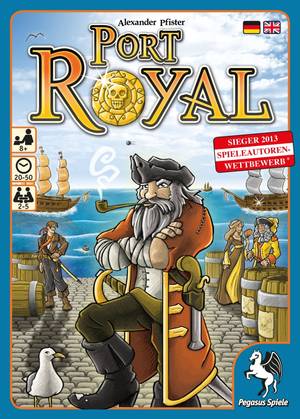 Set in a port (duh), your role is to recruit a crew of the pious, the powerful and sometimes the piratical and to complete objectives to earn victory points. The first to twelve wins!

The game itself is one of pushing your luck. Port Royal consists of a single deck of cards within which are a mix of ships (of varying colours and reward), objectives and characters. During your turn, the player will reveal the top card of the deck; they can then choose to reveal a second, third and so on until they choose to stop, or they bust because a second ship of the same colour as one already revealed turns up.

As already detailed, three different cards exist in the deck. Ships give you gold depending on how big they are. What’s clever about this game’s design is that the cards also act as the coins; players just draw cards face down from PT’s single deck until they get enough. This adds a tricksy element of not knowing what cards have been taken, and reduces the effect of card counting as you are never sure which cards have been removed. It’s an elegant solution that keeps PT’s component count down, making it both cheap and playable in a small area like a pub or cafe. 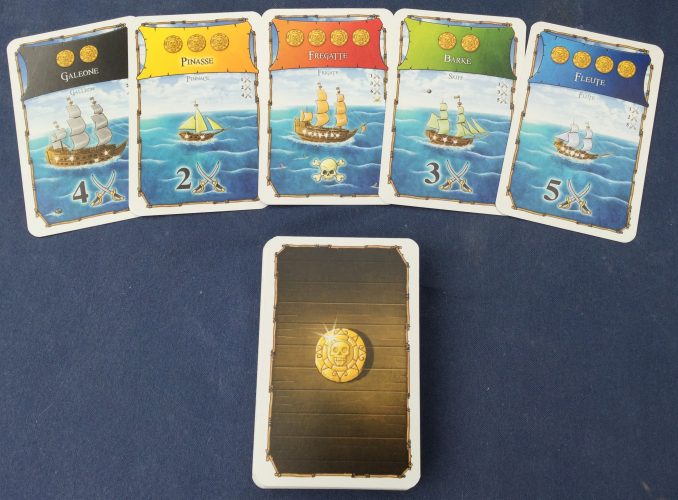 Character cards are instead bought from the revealed cards and give a permanent bonus. For example, the Pirate gives the player swords which allow then to ‘repel’ ships, reducing the risk of getting two of the same colour, whilst the Priest gives a Holy icon which helps with completing objective cards (more on this below). Each character also includes a victory point value depending on their cost and power level.

Objectives are set aside when revealed from the deck, and players can complete then by spending their characters who match the symbols on the card. So if an objective has two Holy icons and an Anchor icon, the player can discard two Priests and a Captain to complete the objective, giving them both coins and victory points worth more than the discarded characters.

Once a player had taken what they want, instead of scooping up all the cards they pass them to next player. They then have the opportunity to buy a card as well, so long as they also pay the active player a coin on top of the ship/character they take. This mechanic promotes player engagement (along with  the stress of ‘will they/won’t they bust’ of course!) and keeps the game pace up as people have more opportunites to get the cards they need. It also keeps the money moving, another way of pumping the speed. Once everyone has had a chance to buy/take a ship, the remaining cards are discarded and the next player takes their turn flipping cards. 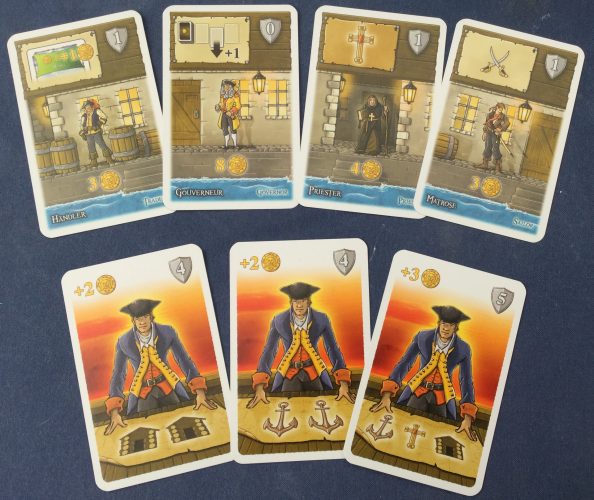 Port Royal is a game of smart, stylish design. Everything is done with one deck of cards which in itself promotes tension along with the push-your-luck element of resource collection. I adore how pared down PT is whilst still delivering a meaty game experience, all within thirty minutes. The mix of cards gives enough depth to this short game to promote several possible strategies: do I buy lots of Pirates to repel all but the biggest ships, do I buy the most expensive characters for victory points, or do I chase those objectives?

The sense of progression given by the characters gives the player the palpable feeling of gaining control over what starts as a pure-luck game. That said, it is still a push-your-luck game, meaning PT’s biggest weakness is that even a small string of bad luck (two blue ships right off the top?! What the hell!?!) can set you back significantly. If you can’t get coins, you can’t get the characters that improve your consistency and mitigate some of the luck factor. It can also be rather deflating to have two or three turns of ‘doing nothing’.

The components are fairly decent, with a thick and well-printed cardstock to hold up to the high level of shuffling required in Port Royal. The artwork is, shall we say, functional? It’s not bad, but I won’t be framing enlarged prints any time soon. The simple graphics and limited colouring don’t hurt the game, but if I saw this at a convention and didn’t know what it was, I’d probably walk on.

So it’s a shortish game with plenty of tension and clever mechanics in an elegantly designed package. Just be aware that luck plays a significant part in gameplay, and you won’t be drooling over how this looks on the table top. I thoroughly recommend this game, with the bonus of being able to play at the pub!