Portal is coming to the tabletop!

Cake, and grief counseling, will be available at the conclusion of the test. – GLaDOS

Remember that crazy computer and all her tests? Remember getting stumped by that one puzzle, then laughing your head off as the toilet cried ‘Thank You for Your Business!”? How about finding out the cake was a lie? Well, something wonderful has happened in the world of Portal – unfortunately cake may or may not be involved…

Crytozoic (publishers of the DC Comics Deck builder and Assassin’s Creed Arena) have released details of an article where a partnership between Valve and Cryto will hopefully lead to the release of the Portal board game, later this autumn:

“Portal: Uncooperative Cake Acquisition Game” is the non-final title for Valve and Cryptozoic’s board game, a strategy game in which two to four players guide expendable Aperture Laboratories test subjects around a tiled board in an effort to “test in the most desirable test chambers,” according to Barnett. It’s a competitive experience: Once a player takes the lead, they win by eliminating their opponents’ test subjects — or their own. At times it can be a cooperative game, but only when people are teaming up to prevent another person from winning. 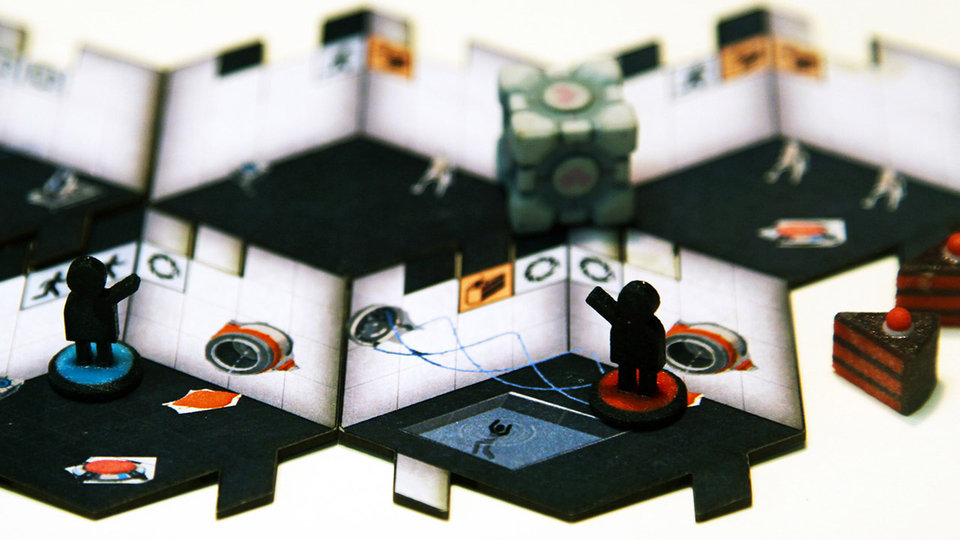 A snapshot of the prototype designed at Valve HQ.

“From the very first prototype, the core mechanic struck us as unique and compelling. As it evolved, it survived our rigorous process of external playtesting and iteration,” said Barnett. He explained that while Valve has worked on other board game ideas, “this is the first that we’re sure meets the quality bar that customers expect from Valve.” According to Barnett, Valve worked on the Portal board game prototype for a year before approaching Cryptozoic in early 2013, hoping to enlist the tabletop publisher to lend its expertise and “add a final layer of polish.”

A link to the full article by Samit Sarkar can be found at Polygon.com. Some pretty exciting stuff, and I can’t wait to see how they handle the portal gun mechanic!

An avid board and card gamer, this displaced Cornishman has spent way too much time playing games and skulking around his local hobby shops. He later escaped to Swindon, the land of roundabouts, where he currently designs games whilst infecting those who stand still too long with his gaming lurgy.
You might also like
board gameboard gamesGLaDOS