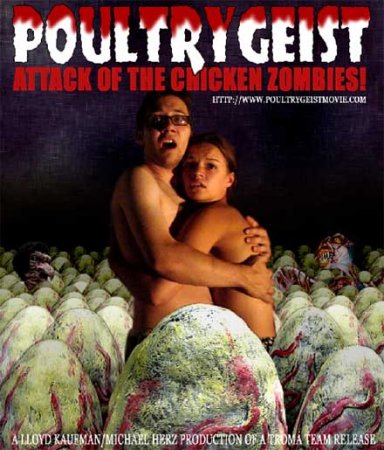 Lloyd Kaufman co-founder of Troma Entertainment and director of The Toxic Avenger, both helped write and director this low budget (approx $500,000) cult classic. In fact Kaufman believed in this film so much, he and his wife dipped into their own retirement funds to help create the film.

With musical numbers rivaling a geek version of Rodgers and Hammerstein, Poultrygeist is a true homage to the old grindhouse horrors. It follows in the footsteps of the slapstick gore films like Kaufman’s earlier works The Toxic Avenger trilogy.

“Poultrygeist continues Troma Entertainment’s long history of cinematic political activism,” said director Kaufman. “Big Media puts the Kool-Aid in the water and brainwashes the public to line up at fast food joints like obese, artery clogged zombies…. except in our film it’s chicken-Indian zombies. The American Indians were exterminated and so are billions of innocent chickens! The zombie is a perfect metaphor.”

There will be many people reading this review who don’t know much about Troma Entertainment but it is one of the longest running independent film studios in America. Some of today’s biggest stars on the silver screen can be found cutting their teeth in Troma’s extensive film library. Dustin Hoffman, Robert De Niro, Kevin Costner and even Samuel L. Jackson. In fact South Park’s Trey Parker and Matt Stone were due to cameo in this film as the main character ‘Arbie’’s parents, but the scene was scrapped during shooting. However, they did manage to keep porn great Ron Jeremy’s cameo in the film.

The story-line such as it is, is about Arby and the loss of his girlfriend Wendy to college and her now lesbian activist lifestyle. Wendy becomes part of an activist group against American Chicken Bunker, a military themed fast-food joint that has been built on an American Indian burial ground. Arby in an effort to get her back gets a job working for the Chicken Bunker as a till-girl.

Needless to say as a homage to grind-house horrors this film is overly gory. It not only gives Quentin Tarantino a run for his money in blood shedding, it blows him out of the water. I couldn’t quite believe what I was seeing on screen. This film certainly has a place on my shelf under the ‘guilty pleasure’ section of my DVDs.

I can also suggest watching this film as part of a hardcore drinking game. Every time you see naked breasts upon the screen take a shot of your desire poison. I believe it will be enough to get even the most hardened drinker at least tipsy. And if not you could always do hardcore rules and include jiggling breasts, but have an ambulance on standby for that one.

In conclusion I think that if you’re prepared for an off-the-wall unconventional film, and can survive the opening scene, which includes zombies, teenage sex in a cemetery and an axe-wielding sexual deviant then this film is for you.