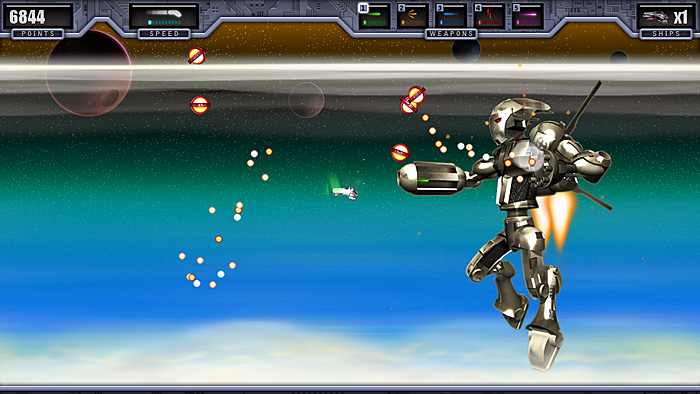 It’s been a long time since I was challenged by a shooter game, be it a horizontal or vertically-scrolling title… and I can count on one hand the games that I kept going back to; Hellfire, R-Type and Ikaruga. Now I have one more title to add to this list – Power Up.

New to Xbox Live‘s Indie section, Power Up is a labour of love from one man: Mike Hanson – the single developer that makes up Psychotic Psoftware.

Very rarely are we able to see the complete production cycle of a game – most of the time we hear of a game’s intended release, possibly see some alpha gameplay, and sometimes take part in a beta or two. This is where the beauty of crowd-funded projects comes in – sites like Kickstarter gives the game developers direct contact with it’s intended catchment audience, providing as much, or as little information as they like.

This was what gave birth to Power Up – Mike succeeded in funding his title in February of this year, aiming for £5,000, and eventually acquiring donations amounting to £7,050 when the Kickstarter project came to a close – and I was one of the backers (in fact, if  you look closely, you’ll see “James ‘SpasmicPuppy’ Buckingham” in the credits of the game).

Was the funding well spent? Was all the blood, sweat and hard work poured into the game over the past few months worth it with the end result? The short answer is definitely a resounding yes, and here’s why.

The story in Power Up is relatively light – you’re the pilot of a prototype space fighter dubbed “Weapon F”, and in the aftermath of the destruction of mankind at the hands of a race of reptilian aliens, you have one thing on your mind: revenge.

The dialogue boxes remind me of the old RPG-style on-screen prompts you’d get in the days of old, before speech sampling was possible, and it’s definitely one of the key factors of the game that makes me feel nostalgic.

The graphical style of the game is great – sprites are beautifully rendered and animated, with some great particle effects to go along with it. The action is fast and frantic, even when you play on the Easy difficulty setting (there are 4 in total; Easy, Medium, Hard & Psychotic). The main thing that sets Power Up apart from other sideways-scrolling titles is that you’re given all the tools you’ll need from the getgo – there’s no earning new powers or guns.

You have five different weapons, all dealing with enemies coming from different directions – the green weapon is your straightforward forward-shooting gun, the orange gun is a multi-shot weapon, the blue gun fires backwards, red fires up and down and finally the purple weapon is a plasma gun that leaves a trail of  devastation  in it’s wake.

You also pick up score bonuses, special attacks and boosters for your speed and force field. The special attack destroys everything on-screen (as you’d expect), and the force field becomes invaluable in later levels when you can’t avoid enemy fire.

The sound and music in the game is great – it has that retro feel to it, but is very atmospheric and a lot of the music had me nodding in time with it too. Mike’s background in music has served him well here. The sound effects are great – with your ship making quite pathetic noises to start with when you’re weak, but as your guns increase in power you get a much more satisfying blast.

There are only a couple of gripes I have with the game, and to be honest I’m clutching at straws just doing that. Firstly, the game is pretty short… though this depends on the difficulty you choose. On Easy, it’s quite possible to play through the game in one sitting fairly quickly, but when you get to the Medium and over difficulty settings you’ll notice the action goes from challenging to insane.

My second gripe is that once the game is complete, you unlock different paint jobs for your ship, but at present there’s no real benefit to this, other than making your ship look cool(er). Other than that, the main replay value is the challenge of completing it on the upper difficulties, particularly the “Psychotic” difficulty… and for me this is still a massive draw.

Where Power Up really excels though is the pure simplicity of it. The game doesn’t try to be complicated, or have a convoluted plot or some bizarre gameplay mechanic. It takes inspiration from the classics, and it shows – that’s what makes it great. The controls are simple, and easy to use even when you’re panicking about near-misses… the game is tense and kept me on the edge of my seat the entire time playing.

However I, for one, am left scratching my head as to how one guy is responsible for this title. Most games of this quality and polish take a group of people to create, and yet Mike Hanson seems to have pulled it off. I can’t wait to see what he has up his sleeve for his next title (aside from the PC version of Power Up, due in November).

If there’s one indie title you should buy, then it’s Power Up. For the incredibly  meager sum of £0.69 (at the time of writing), you really can’t go wrong. Buy it now, thank me later. If you want to check out some gameplay, and have a little chuckle at the same time, check out a video from some friends of mine over at Armed With Controllers here.