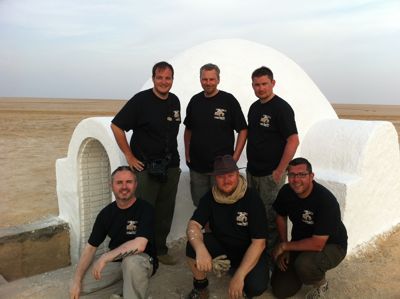 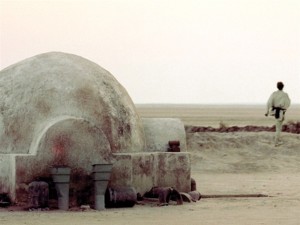 In 2010 a group of Star Wars Geeks from all over the world went on a trip, nay, pilgrimage to the Tunisian desert, in a bid to be closer and therefore one with the Holy Trilogy (the Jedi, the Empire and the New Hope, Amen)

It was in this desert, toiling through the 50 degree heat and suffering from SWGH (Star Wars Geek Hysteria), that our intrepid explorers stumbled upon the homestead of Lars.

And lo they did come to Tatooine and it was good and they did rejoice and the homestead did Speak, “Oh Geeks, thou hath traveled far, but thou hath been deceived. This is not the hut that Lars built, but a shell of it’s former, newer, self. Back you must travel, many miles you must go, thousands of dollars you must collect and restore me to my former glory.”  And they did bow and agree the vision was good and……

Ok, ok, enough of the bollocks; I have to fess up here. This article was originally going to be an audio recorded interview with Mark Cox, one of the said intrepid explorers who went over to Tunisia to repair Lars homestead, but I am officially a douchebag and deleted it; all  30 minutes! There is not a word “epic” enough to describe this Epic fail… I actually felt physically sick. Such a heart wrenchingly beautiful Interview as well, I nearly cried, you WOULD have cried…. There would have been crying! The passion and Star Wars lovin was oozing from every crevice, it was monolithic and we will never see the like again.. sigh

Luckily for me, I had written notes and Mark, the kindly Geek sort he is, let me phone him back (while he watch the football no less) to go over anything I had missed. And so here Ladies and gents is what I salvaged from my first interview debacle:

Lars Homestead is officially one of the most recognised and iconic Star Wars sets ever. Its iglooesq façade accompanied by 2 suns and a john Williams score, resides in the heart of every Star Wars Geek beside the death move for Subzero in Mortal Kombat (Forward, Down, Forward A) and a mental map of how to get the one ring to Mordor… or is that just me? It is therefore understandable that so many brave the long journey to the most inhospitable parts of the world to be near it and in Mark Cox’s case, get married by it!

a sentiment I whole heartedly agreed with!

We discussed at great length Mark’s love for Star Wars and what having his wedding there meant to him; It was very touching, in a geeky, I’m jealous because my girlfriend would never condone such an action.. Lucky bastard, sort of way. He then went on to tell me how the whole refurbishment project came about.

Those who can Geek, those who can’t, write blogs about geeks.
– Matt Geary, just now –

Matt- The whole effort seems to be a bit of an international affair, with people from the States, Belgium, Holland and of course Blighty. How did you all get to know each other? and how did you come up with the idea?

Matt – I’m guessing after 36 years its going to have seen better days?

Mark – That it has been there for so long is a misconception; the original homestead was destroyed many years ago. The one you see today and the one we restored, was created in 2000 for Attack of the Clones film

Mark – One night someone made an off the cuff remark about how it would be good to come back some time and restore to its former glory. Then just under two years later, we did it!

Matt – and every Geek in Geekendom thanks you for it sir!   So do you or any of the other guys have experience in set building / restoration?

Mark – Well, we all did really. Myself and Rob Cunningham are jacks of all trades and can put our hands to most things; Terry Cooper has made sets for films and TV before, so knows a lot about them; Immanuel Dijk works in the building trade; Mark Dermul and  Michel Vanpoorten  can put their hand to most things and we also had 3 very helpful Tunisian builders.  It is also important to say that If it wasn’t for Michel and Mark translating for us we wouldn’t have got very far. I doubt speaking in a louder, slower  English accent would have sped up the process very much…

Matt -Were the Tunisian Government ok with you doing this?

Mark – Yea, completely, the only stipulations they had was that we employed local labour, which we planned on doing anyway. As well as restoring the homestead we also wanted to give back to the community; so we bought everything there: spades, shovels, materials and then when we had finished we donated them back.

Matt – You are making me feel bad, Geek Heros and good Samaritans all in one! So how did you pay for everything? I believe you had a facebook group?

Mark – We did yeah, and it was amazing the response we got, quite humbling actually that these people would trust us with their money…

Matt – you were going to restore a part of their childhood, If I had known about it I would have sent you money!

Mark – Thanks! maybe next time…. Some people gave upwards of $600, some people just $1 but it all added up and in the end we had $11,000 to pay for everything and get a good job done; it was really touching.  On that note actually myself and all the crew would like to thank everyone who helped make the restoration possible by donating money, as without them it would have still been a twinkle in our Starwars crazed eyes.

Matt – The support was worldwide from what I saw of the contributors and so was the media coverage… What’s It like to be working in insurance one day and to be world famous the next?

Mark – I wouldn’t say world famous but we have had a lot of coverage for the project. It’s really weird, I would have never have though it would have got this big; kinda scary really…. I guess a big part of all this attention is down to Rob and Michel for taking so many great pictures and documenting it on film, as well as Mark for setting the website up to document and promote the entire thing; a talented bunch!

Matt – Back to the restoration itself, I heard a story about there being different types of sand in the foundations?

Mark – That was all the brain child of Colin Kenworthy, who wasn’t a part of the crew but we knew from previous tours and was on holiday there at the same time; turning up now and again to bring us water and food.. we called him the caterer. He thought it would be a good idea to get sand from the different Starwars  scenes in the area and put it into the concrete foundation, so we did.

Mark –  It was a very cool idea

Matt – Final question then Mark.. what’s next for you guys? You have been through this heroic effort and it’s all over, any plans for the future? any other projects?

Mark – I will have to pleads the 5th on that one

The last 10 minutes or so of our conversation ( before i deleted it!) were me begging Mark to tell me what they were planning but to no avail. Then I ended by gushing about how amazing I thought they were for having the motivation and inclination to do it in the first place and how every Geek owed them a debt; I think I said ‘thank you’ and the word ‘awesome’ about 100 times.

These 6, nay 7 men (can’t forget Colin)  brought back a part of our childhood and have set up a big enough support network to make sure that in the future it doesn’t degrade again, or at least for a while. You can check out the fruits of their labour, accompanied by photos, youtube footage and a diary at their website.

Geek Pride would like to thank Mark for taking the time to talk to us.. twice, to all his companions for all the work they did restoring the Homestead and to everyone who donated money to their cause.

Cant wait to see what they have in store for us next!