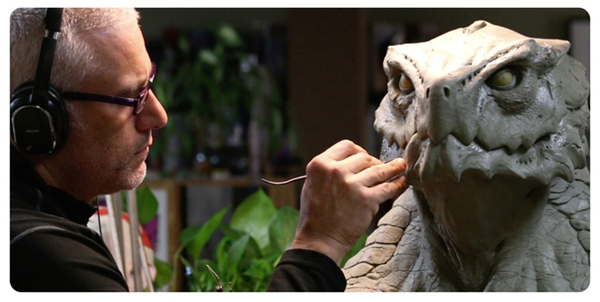 Sandy Collora is a veteran special FX artist who worked with industry titans like Stan Winston, Rob Bottin and Henry Alvarez before going on to direct short films, commercials and music videos. This lead to making acclaimed fan film Batman Dead End. Collora made his feature debut with Hunter Prey and is currently running a campaign to raise funds for his next film Shallow Water.

Inspired by the classic creature features Collora’s Shallow Water is a practical FX oriented horror film about a fishing trip to a remote fishing hole nestled deep in the Sea of Cortez, on the Baja peninsula. When the group of fishermen finally reach their destination though they encounter………..something. Their trip fast becomes a struggle between Mother Nature and Human Nature. Whilst this campaign is definitely ambitious (it has the highest funding goal of any horror film campaign on Kickstarter) it also looks pretty damn cool.

“I hear people complaining about how the Hollywood machine is cranking out the same stuff OVER AND OVER, choosing economic safety over the creative art of filmmaking. I grew up on the original Alien and Predator films. I love them. But where are the NEW iconic creatures and characters? How long has it been since we’ve seen something new, truly unique, and powerful in a genre film? Too long. If Hollywood won’t do it, I will. With your help, we can raise enough independently to make a great genre film and maybe together we can even change the paradigm.”

As a fan of horror, creature features, indie film and practical FX I’m really hoping that Collora hits his target. The crowdfunded Harbinger Down is a great example of what can be done by talented people with a small budget and this looks set to follow in the wake of Alec Gillis’ film. Talent and enthusiasm can only get you so far though, at the end of the day you still need funding and crowdfunding enables indie directors to make the film they want to make without having to compromise by relying on studio’s for funding. If you like the idea of supporting an indie film maker wanting to make an atmospheric practical FX driven creature feature horror film then check out the perks on offer, a digital download of the film will set you back a measly $12/£8 and there’s plenty of other cool stuff on offer.