Kinder surprise have already hit the news with their new gendered eggs – pink for the girls with Fashion Dolls, and blue for the boys with Sprinty cars. 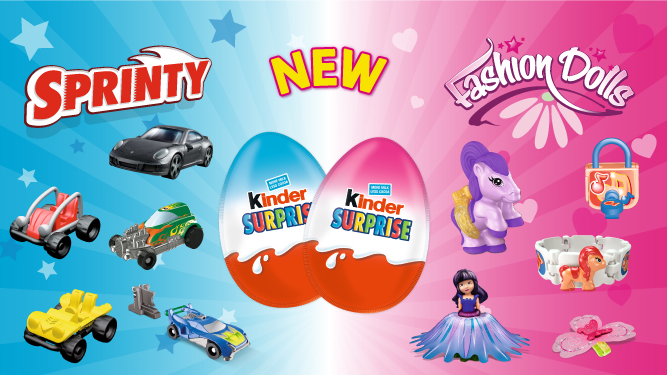 Well, this is a limited release, says Kinder, and will have 3 stages, with the second in February including Marvel Heroes in the blue eggs, and Disney Princesses in the pink ones. They also blather on about how it’s not sexist or gender stereotyped –

“We do not advocate or promote our products as gender specific. Instead, Kinder Surprise Pink and Blue offers a range of interesting new toys in coloured eggs which help parents navigate the toy ranges on offer and make purchasing decisions based on what is most relevant for their child.”

Yes, of course the arbitrary assignment of pink and blue is purely coincidental.

Not only is it really blatant gender bias, but it also kind of ruins the ‘surprise’ doesn’t it?

Of course, no one will want to deprive their whining brood of Marvel figures, or even Disney princesses, if that’s their bag, but again, lets think about the girls and boys that at a infuriatingly early age are being told that what they like is not what they should like, and they are not fulfilling the expectations of their gender.

So, just as with any number of awful superhero movies, many fans are a captive audience, and this applies especially to children, so if we are unable or unwilling to just not buy the product, what can we do?

Ferrero UK (distributor of Kinder Surprise) is a company that prides itself on it’s Code of Ethics, and is involved in many social enterprises. They also promise to respond to customers with promptly and with courtesy, so it is easy enough to send them a message through their website, or even call them if you want to. There is also a petition available to sign on change.org – it has surprisingly few signatures, so maybe a bit of sharing and promotion is required. It may not seem like much, but it shouldn’t go without complaint when companies choose to tell children what they should and shouldn’t like.

The Let Toys be Toys campaign have already contacted Kinder on the issue, and have a comprehensive article on their website.

You may not be a parent, and may not care about gender stereotyping, but as a geek are you seriously ok with telling little girls that they shouldn’t idolise superheroes? Come on humans – we should be beyond this!

I'm Mel, currently living in Sheffield, but originally from the other side of the Pennines. I'm a lifelong gamer, RPing from a worryingly early age, and basically raised as a geek - I don't think I ever had another option! Any spare money I have gets spent on comics, photo gear or lucha masks, and any spare time I have, when not gaming with friends, is wasted on Sims, Minecraft and trashy movies.
You might also like
breakingequalityKinder Surprise