Snow in Hell, by Sophie Sparham 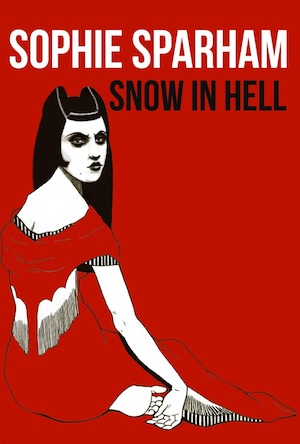 I love mashups, but Sophie Sparham’s Snow in Hell takes this to the extreme.  It starts out innocently enough as high-concept science-fiction, then angels start appearing, then necromancers, and then it gets seriously weird.

Weird is no bad thing.  Just ask China Miéville, who has pretty much built his entire career on weird.  Yet, in Snow in Hell, the weirdness feels too disconnected and lacks the structural cohesion to support the setting.  We never see how the disparate elements inter-relate.

A classic trope is the outsider perspective.  In Snow in Hell our outsider is someone who has been away for some time, and as such is introduced to how the world has changed.  However, this introduction only goes so far, as there is much he already knows and thus the exposition of the fundamental aspects of this universe feels forced.  Also, the internal viewpoints of the characters can be obfuscatingly frustrating, as they allude to past events without expanding upon them, as would naturally occur, in order to maintain a sense of mystery.

Snow in Hell is certainly eclectic, which is great if you that is what you seek in a novel.  Sophie Sparham has an admirable knack for creating a wonderfully diverse series of characters, and when I say diverse, I mean genuinely.  Where else will you meet a cross-dressing necromancer?  Sparham imbues her cast with a bizarre brilliance, that celebrates their oddities and eccentricities.

Snow in Hell is something of marmite story.  You will either love the exuberance of having the weirdness factor set to eleven, or struggle to read it due to the lack of cohesion between the disparate elements.  For me, it was unfortunately the latter.