- Everything you need to start playing with 2-4 players is included.
- Though it is a starter pack it has excellent replay value.
- Added chapter packs make ideal for those who enjoy deck customisation
- Beautifully illustrated.

- The rules can get a little wordy.
- New comers will need to become familiar with their decks to ensure meaningful game-play.

This beautifully illustrated game is a must for Game of Thrones fans who enjoy deck building with massive potential for customisation. Those who are new to the Living Card Game will find everything you need to get started and become an expert in in only a couple of sessions.

Fantasy Flight Games brings you the A Game of Thrones: The Card Game Second Edition. Set in the world of A Song of Ice and Fire it’s time to battle you opponents by taking command of the well known factions to lay claim to the Iron Throne. Though the first edition of the game gained popularity quickly and spawned many expansions, Fantasy Flights have gone back to the drawing for this 2nd edition, streamlining the play and updating the artwork.

A Game of Thrones: A Card Game is what Fantasy Flight refer to as a Living Card Game which basically means it’s a deck building game, supplemented by chapter packs that allow you to customise your decks. However, the base game has enough cards to allow for a 2-4 player game. After one game we had barely burnt through our 45 card decks meaning a good amount of playability from just the starter pack.

The game includes 8 faction cards featuring the Starks, Lannisters, Baratheon, Greyjoy, Tyrell, Martell, Targaryen and The Night’s Watch, 192 player cards, 28 plot cards, 6 title cards and tokens including gold, those all important power counters, double sided influence tokens and the first player counter. The set has with it two books the Learn to Play book and the very handy index included Rules Reference book. The artwork on the cards is outstanding and interesting, you’ll want to take a minute to explore how the iconic characters and well known locations have been re-imagined for this game. 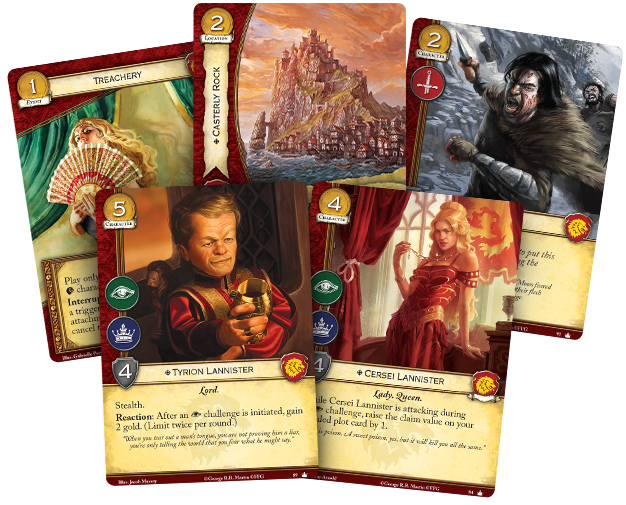 The set-up for your first two player game (referred to as a Joust) is described in step by step instructions, detailing the cards required to set-up House Stark and House Lannister, however as we had three players, a melee game, we used the ‘out-of-the-box’ decks described under Deck Building, this combines two factions to create the decks ignoring the ‘loyalty rules’ in place for custom built decks.

During our game we played as faction The Old Ways, (Stark/Greyjoy), At the Wall (Night’s Watch/Baratheon) and From East to West (Targaryen/Martell). Each deck has 7 particular Plot Devices assigned, these cards are your strategy, each round you look through and choose the card that decides your plans for the next round. The plot cards also influence initiative, the gold you get to spend and the claim, for that round. Some also have very handy abilities for instance reducing the cost of playing cards, because gold is precious and you generally don’t have that much to spend.

This game does require preparation and a good understanding of the rules before you get started, with seven phases to get your head around, three types of challenges you can make each round and a host of attributes that convey specific rules – the Learn to Play book got a little wordy, it is not a pull out the box and play straight away sort of game. I’ll be honest, I found the rules a little complicated at first so turned to this very handy tutorial video produced by Fantasy Flights. It is 17 minutes long, but if you are a visually learner like myself it will definitely give you a better understanding of the phases of play.

Let’s focus on whether it is a good game. We played with the core set and added the Taking the Black chapter pack which introduces new characters, events, attachments and plot cards.  With my From East to West deck I made some very poor spending decisions in the first couple of rounds, I had a rubbish hand to choose from and a need to buy big from the word go. Those were my foolish mistakes. About three rounds in and I still only had one character card in play.

My opponents however did much better and were soon enveloped in the secrecy, tricks, plot. It was intriguing to watch them battle each other for power and take full advantage of variety of abilities the cards offer.  As it was the first time we had played there was frequent referral to the Rules Reference for clarification, particulary when you have two very competitive people playing. 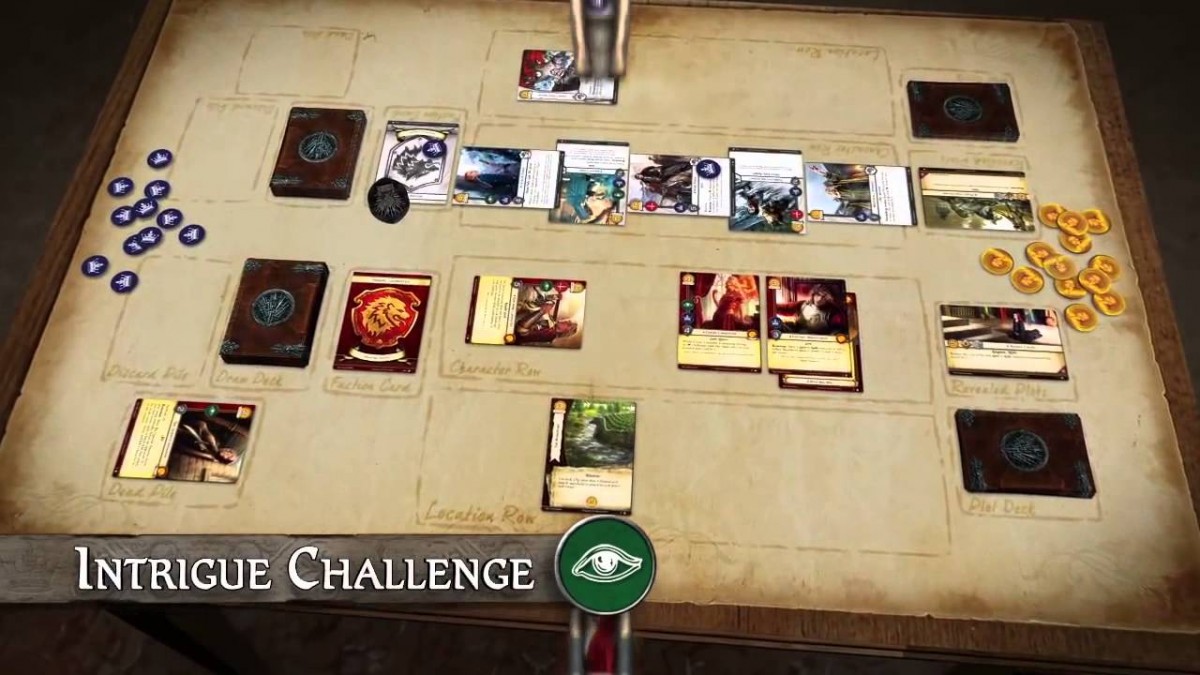 Within a few rounds the game play began to flow well through the phases. As a player I wish had spent a little more time becoming familiar with my deck and exploring the relationships between the cards before we started, it will make for a more strategic approach on my part. As we came close to ending the game (first to 15 power tokens)  I found I had gained 9 power, not bad considering how I started out. It was a good way of highlighting how quickly this game can change with the right cards and a little more understanding of how it works. I have not doubt I will do much better in the future.

A Game of Thrones: The Card Game 2nd Edition is definitely a game recommended for competitive deck building fans who thrive on strategy and cunning. The future release of more Chapter Packs means big potential for those who enjoy customising their own decks. However, those with an interest in getting started in a Living Card Game can’t go wrong with this core set. It has massive replay value without you wanting to add new chapters straight away.  Game play takes a bout 1-2 hours and once you’ve got the hang of it the game moves smoothly through the phases. For players new to the Living Card Game the learning curve is a little steep but as you get everything you need in the starter box well worth the effort for the fun. Game of Thrones fans who enjoy Magic The Gathering need to play this game.

Editor and occasional writer for Geek Pride! I prefer Star Trek over Star Wars, collect comics and wish I could be a superhero one day. I tabletop RPG as well as a little gaming, design the odd t-shirt now and again, update my Geek Parenting Tumblr and when I have cash to spend (which is rare) I scour the internet for Wonder Woman collectables. Also Doctor Who and Firefly rock!!
More Goodness
Card Gamedeck buildingEsdevium Games