- It's a dice game, so luck plays a huge part in planning your 'strategy'
- Doesn't really live up to the epic sounding title

Don’t let the epic name fool you; Age of War is a tiny game of conquest set in feudalJapan. Created by legendary designer Reiner Knizia and published by Fantasy Flight Games, does this game live up to the pedigree?

The game play of AoW is fairly straightfoward. The players set out 14 Castle cards which feature rows of symbols (such as an archer or cavalry) and a number, which represents how many victory points the card is worth. Players can ‘defeat’ a Castle by rolling the seven custom dice at the beginning of their turn, then trying to match the dice results to the symbols on each card. However, a player can only place the dice if they can complete the whole row; no half measures! 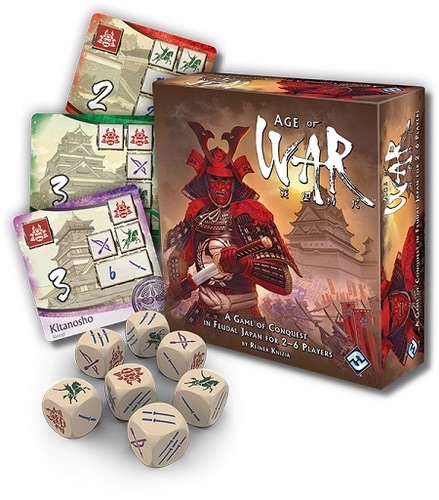 Everything in the little box

To make the game play more complex, players can only complete one row at a time, so even if you’re lucky enough to roll all the symbols you need in one go, you can only assign dice to one row. You then have to roll the remaining dice and hope to match another row. If unsuccessful, the player has the option to lose one die from their pool and then roll again. This continues until the player either completes all the rows, thus defeating the Castle and getting to take the card for the victory points printed on it, or the player runs out of dice. If this occurs, the dice get passed to the next player.

Another wrinkle is that even if you defeat a Castle and claim the card, the other players at the table can choose to instead try and steal your card for themselves. This is done by matching the symbols as before, except that the attacking player also needs to roll an extra Daimyo symbol in the top left of the card. This makes taking the Castle from a player more difficult than taking one of the unclaimed Castles. I love this feature of the gameplay, as it means players are not immune to the predations of the other players. It keeps the game engaging too, as players have the opportunity to get back into the game if someone is streaking ahead on victory points.

Finally, each Castle is part of Clan which is represented by the colours of the cards. If a player can collect all the Castles from the same Clan, the set is then flipped over. This has two benefits for the player who accomplishes this; firstly, the flipped cards as a set are worth more in victory points than the individual Castle cards added up. Secondly, the cards are immune to being attacked by the other players. This is a clever level of detail in an otherwise low-strategy game as players will have to decide whether to go for an easy card or that harder card that would give them a little extra in victory points and score security. The game ends when the last unclaimed Castle card is taken, with most victory pints determining the the winner.

The custom dice symbol matching mechanic with re-rolling is practically the same as that used in Eldar Sign, where players are instead trying to complete Rooms for various rewards. Whilst it is incredibly difficult to come up with new mechanics in the board game industry, this copycatting may be the main reason why FFG picked up this design to publish. AoW could almost be thought of as Eldar Sign Lite, which in itself isn’t a bad thing; a clever twist on an old mechanic can be just as welcome to me as something completely new.

Close up of the Castle cards

I like how the game presents you with some choice in how you go about playing; Do I take a Castle in the centre of the table, or go for an opponent’s card? Do I go for the easy one pointer or take a risk and get the last purple Clan card to complete my set? The bottom line however is that it is a dice game, and is very heavily influenced by luck to the point where strategy takes a back seat in game play. Sure, you can pick the Castles that are statistically more likely to come up on the dice, but if Lady Luck has turned her back on you, it won’t matter. This is something I didn’t enjoy about AoW; you need to accept that you may, through no fault of you own, spend turn after turn after turn doing essentially nothing as the symbols you need just don’t turn up. This can be very frustrating, especially if your opponent goes on a hot streak and seems to roll what they need every time.

The game is short at around 15-30 play time, which is suited to the game’s simplistic mechanics and quick turns. AoW will accomodate from two to six players, but is best kept at the 3-4 player range, as down time between rounds gets to be a drag in larger games. 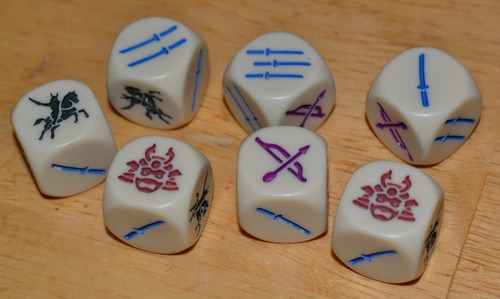 Close up of the custom dice

The components and artwork are as you would expect from FFG; amazing! The card stock and box have a linen finish for durability and feel like they could take some serious abuse. The colour scheme is colourful yet muted with a fantastic looking battle scene on the front. The rulebook is well written and clear with examples to help guide players through the admittedly simple ruleset.

Age of War is a short and simple game with some limited strategy but mostly a hefty dollop of luck. AoW is a strange beast in that you need to accept that no amount of skill will save you if the dice just aren’t going in you favour. The game is playable enough, and is suitable as a filler between bigger games, but it’s not a game I would pick up and play for a whole evening.

An avid board and card gamer, this displaced Cornishman has spent way too much time playing games and skulking around his local hobby shops. He later escaped to Swindon, the land of roundabouts, where he currently designs games whilst infecting those who stand still too long with his gaming lurgy.
More Goodness
Age of Warboard gamebreaking