The Kickstarter Gamble – A Closer Look at Dragon Punch!

Cards can be a little flimsy, but then, they're card
Actually little negative to say, because the positives massively outweigh them

A fantastic and well thought out game that genuinely deserves to do well.

These characters wouldn’t look out of place in any fighting game.

Kickstarter.
Reading this, you’re probably already very familiar with this particular website and what it has to offer which is, quite frankly, almost everything.
More importantly, and the reason we’re all here, is the amount of game developers (both digital and tabletop) using Kickstarter as a platform to fund shiny new playthings for you & I.

You may recall, I’ve already touched on some Kickstarter projects, the most recent of which you can find here.

Now, some Kickstarter projects fall into the depths of development hell and will become massively delayed, but there is still the promise of a nice new game at the end of the journey.

One of these games is the wonderfully named Dragon Punch! (Yes, the ! is part of the title).
I backed this project very early on and found myself captivated by the beautiful artwork and the game’s simple yet intriguing concept.
Imagine your classic fighting games a la Street Fighter, now imagine this game translated as a card game.

Now, if you will, imagine this card game simplified to the point where you can play anywhere, without even requiring a table. In the middle of a park? Arguing about which characters in the latest Guilty Gear have the highest chip damage percentages and best crossups? (You’ll understand that if you like fighting games) Just crack out Dragon Punch!, pick a character and have at it! 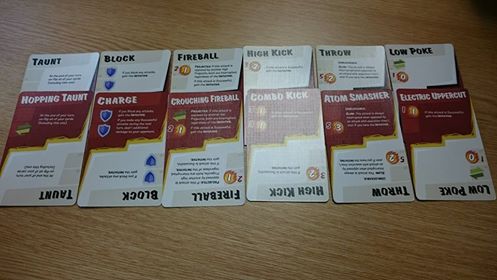 See how the attacks change? You also flip a card the other way around so it can’t be used again until you refresh it (with Taunt). Clever!

The game operates on a very simple system, with your hand of cards acting as both your move options and your healthbar. Once all of your hand has been flipped to its red side (which has a different move option, so can be useful) then your “life bar” is empty and you lose. Games are typically played to best two out of three and you are encouraged to be very vocal when announcing your chosen move card.

When I got my hands on my copy of this game, it arrived at my office one unsuspecting morning and over the course of our lunchbreak, myself and my colleague eagerly played lots of matches and found it a very easy game to both learn and master, finding intricate and exciting combos even in just a small hand of cards.

Of course, one of the lures of funding a project on Kickstarter are the stretch goals and the bonus backer levels you can get. Now, Dragon Punch! was slightly delayed in its printing, so I’d actually forgotten that I’d backed it to the level where I got two copies of the game in a very lovely collectors tin, as well as, being a fighting game, having alternate “Player 2” colour schemes for the characters and the two unlocked “Boss” characters. 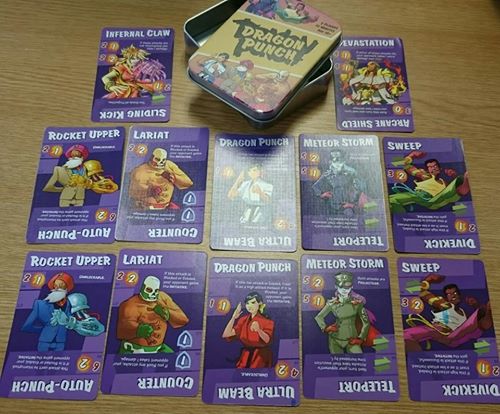 Full roster, with bonuses next to the lovely tin and “Player 2” characters on the bottom row.

Now that Dragon Punch! has been successfully funded and is readily available for purchase, I would definitely recommend giving this game a look, because if there’s one thing the world needs more of it’s quick, simplistic, fun card games that encourage you to shout “Fireball” at your opponent.

Dragon Punch! is a product of Most Mondays Games, alongside Level 99 Games and is bloody brilliant.

Until next time, I’ll be practising combos for EVO, and I’ve been Craig.

Craig has been raised on geekery from a young age when his Mum introduced him to Star Trek the Next Generation on TV as a kid. Since then, he has gained a wide love of all things "Geek", be it books/comics, cinema or gaming in all formats. He has a particular keen interest in all manner of RPG, be it on a tabletop or in a field larping.
More Goodness
Card Gamekickstartertabletop