Every so often, the stars align and two segments of geek culture come together in glorious communion. A Deadpool video game? Yes please! A Totoro onesie for all aspiring cosplayers/nap afficienados? And now? How about a card game of comic book super powers? I think you know where I’m going with this.

On Kickstarter now is Originz the Superpowered card game, where players take the role of a hero or villain and do battle to decide who is top of the cape-wearing, spandex clad pile. I was lucky enough to grab an interview with the campaign manager and graphic designer Nate Brett, who helped bring this cool-looking game to the crowd funding platform.

This article not only looks into the game itself, but into some of the gubbinz that project creator need to deal with to make a successful Kickstarter campaign.

Can you give a two minute pitch of what Originz is to our readers?

ORIGINZ is a deck-battle card game for 2 to 8 players in which YOU become the Hero or Villian of your wildest imagination and wield iconic superpowers in epic battles for supremacy.

Whether you are an experienced strategy card game enthusiast or a just a casual game player, if you like superheroes, ORIGINZ comes with everything you need for hours upon hours of fun! The rules are easy to learn but when you start building heroes and villains using the 264 cards, you will see that the combinations and synergies are endless.

To play Originz you first pick your play format from Single combat, Cosmic Draft, team battle, free for all, Boss Fight and more. Next select if you will be a Hero or Villain. Finally pick your Originz deck from one of the 12 pre constructed archetypes or construct your own unique superhuman. Now you’re ready to battle.

Every game offers interesting and challenging decision-making opportunities. We have reduced the luck factor that can be found in some other deck battle games, so your skill counts.

Originz is comparable to a collectable card game but where everything you need comes in one box. No need to buy random assorted packs to chase overpowered cards. Oh and did I mention that it has free worldwide customs friendly shipping?

Turn your kitchen table into a comic book battle scene by backing Originz – the superpowered card game today! (After you have read this article of course)

The video for the campaign is pretty slick, how important would you say the video is for a Kickstarter campaign?

I would say that you don’t need to have a campaign video that is quite as “slick” as ours, that’s for sure. The guys behind Originz have invested a lot into this project and I think it shows.

That said, having a good video for your campaign is an important thing. I would say a poor quality video, or even worse, no video at all will do a massive amount of damage to any campaign.

You should make sure that your video conveys what you want it too. Keep it as quick and snappy as you can, but make sure it’s enough to make people want to know more.

It doesn’t have to be all singing, all dancing, (though I would personally love to see a board game Kickstarter video this is sung) but it does need a high level of care and effort put into it. This is the first place most people will start forming an opinion of how professional you are and how good your game is likely to be. 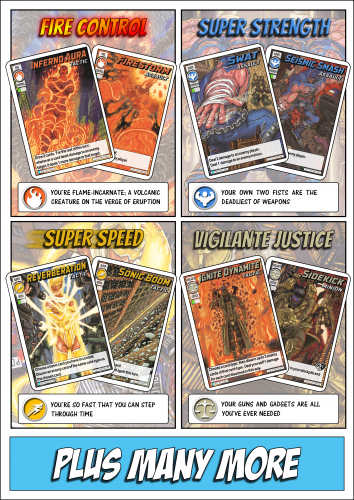 What attracted you to the Originz campaign as one you’d like to work on?

That is an interesting question. As a one man band who works freelance doing marketing and graphic design for board games I try to be quite picky about where I chose to invest my time.

There were three big draws to working with Flavour Faction Studios on Originz. Firstly the artwork looked great. As a player, I love theme in games and good artwork goes a long way to peeking my interest.

Secondly, the rules and type of game seemed to fit a hole in the market. I have been heavily involved in board games for a long time now, so to find something that makes me say “oh, that could be interesting” is not easy.

Lastly, and this is important, Alex and Evan came across as very passionate and professional. They contacted me a long time before they wanted to go to market and that allowed me to have a real impact. For Kickstarter campaigns, I personally only want to work with people that I feel will deliver a good quality product, and I have faith in this company.

The Kickstarter page for Originz looks incredibly well thoughtout. Graphic design is an often overlooked element of campaign pages. What tips/recommendations would you make to any budding creators out there?

Thank you very much; I’m very proud of how the page looks. For me when it comes to designing a Kickstarter page there are a few things I really focus on.

I would say budding creators should first think about their messages. What is it that you want to communicate? What makes your game special? What do you want people to think/feel when they see your page? These questions seem easy, but for each campaign they can be very different. You need to think about your target audience and focus on the best way to communicate with them. One last tip when it comes to getting your message right; your game is NOT perfect for everyone! Don’t try to please everyone because you will end up pleasing nobody.

Once you have your messages sorted, then you need to think about the look. Again this is different for each campaign, but two things to think about are functionality and style. By functionality I mean your graphic design must serve a purpose and allow people to get all the relevant information. When it comes to style my biggest and most flippant tip would be “pick one” and stick with it. Also think about how you want people to feel when they look over your page.

I know this last “tip” will sound crass but it’s true; you need to understand your own personal strengths and weaknesses and get help if graphic design is not something you are good at.

There will be folks out there who will make comparisons to other super hero card games like Sentinels of the Multiverse and the Legendary Marvel series. What element of Originz do you think makes it unique and stand out?

The surprising thing is that there are not a huge amount of board and card games with this theme out there!

There are a lot of differences between Originz and the other superhero games, but the biggest difference is the customisation. Originz is a direct battle games where you get to build your own superpowered hero or villain and fight your friends in a classic comic book style fight. Creating a superhero and then trying it out against your mates supervillain is such great fun. Once you start thinking about what will happen if you combine Cyborg Upgrade with Insect Mutation you know you’re into Originz! 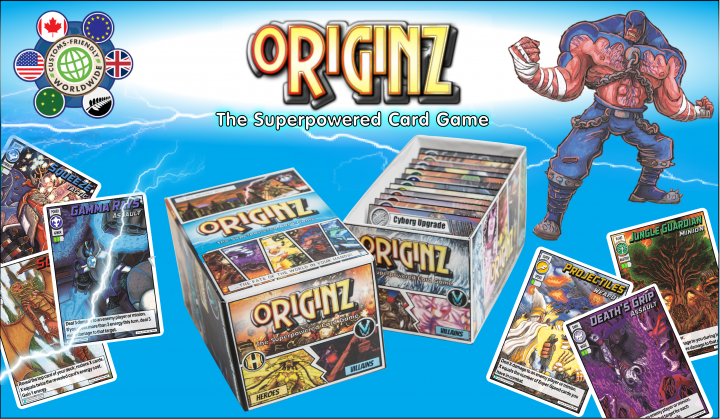 I saw you’ve uploaded Originz to Tabletop Simulator, effectively allowing anyone the opportunity to try it out. How much did this factor into your marketing ahead of the campaign?

Yep that’s right, it is there for all to play. We have a lot of faith in how good this game is and so we really wanted to let people try it out. Tabletop Simulator is just one small part of the marketing campaign, but it’s important to us.

Kickstarter is being flooded with board/card games each week so standing out can be really hard to do. It is one thing to have a great product, but if people don’t know your game is out there, even a good campaign can sink really quickly. As far as we were concerned giving people the opportunity to try Originz and tell their friends about it was well worth the effort.

Free shipping worldwide. I mean, FREE shipping! That’s amazing! Shipping is a tricky part of any Kickstarter campaign and it’s rare to see a blanket ‘Free to Everyone’ approach. What made you decide to offer this?

This has been an area of the campaign we have wrestled with for quite a while. We are using a very good shipping company who have been used many times by successful campaigns so we are confident that delivery will be smooth.

Ultimately we made the decision that we would heavily subsidise the cost of shipping to some areas. Yes, we take a hit when it comes to backers outside the US, but we wanted the campaign to be simple and fair to everyone. We want players all over the world and didn’t want shipping to be a barrier to people backing a game they want on their shelf.

I spotted in the campaign, the Stretch Goals section ends with a cut-off zigzag. Does this mean more goals are on the way? If so, any chance of a sneak peak?

You have a keen eye! You are in fact correct; this section is set to grow as we get more support.  We didn’t want to do any shifty stuff like taking parts of the game out, only to put it back in with stretch goals, but we do want to give backers as much as possible as the campaign becomes more successful and critical mass kicks in.

A sneak peak, a sneak peak! That would be like revealing my plan for world domination as the laser slowly moves toward you. Best way to see what we have planned is to get your friends to back the campaign soon, lol.

The big question: Marvel or DC?

As a marketing person I know how important it is not to alienate half of your target audience by picking sides.

As a superhero fan I also know that it’s Marvel all the way! I mean, really… apart from batman DC has little to offer if you’re honest. To demonstrate my commitment to this position I named my son Logan after wolverine from the X-men (and yes, I know Logan is not his real name)

The other big question: If you could have one super power, what would it be?

Well, I already have super strength, so I will have to go with a regeneration mutation. Why? Because I quite like the idea of being immortal (it’s not too much to ask).

Open floor: Is there anything else you’d like to tell our readers about Originz?

First, I’d like to say thank you to anyone who have taken the time to read this interview, I’m a fan of this site and it’s great to be on it.

All I’d say apart from that is that Originz is a really exciting game to play and if enough people back it, there is the of potential for Originz to become one of the big card games.

Remember… Back early, back often!

The campaign can be found on Kickstarter here. If you’d like to know more about Nate and the work that he does, you can find him at www.wilderlandcampaigns.co.uk, or on Twitter as @Moboardgames.

An avid board and card gamer, this displaced Cornishman has spent way too much time playing games and skulking around his local hobby shops. He later escaped to Swindon, the land of roundabouts, where he currently designs games whilst infecting those who stand still too long with his gaming lurgy.
More Goodness
Card Gamekickstarteroriginz