Straight to the point A cute and simple game with huge scope for gaming community and expansions, but isn’t suitable for true multiplayer.

I love anime, and anime games are a big ‘green light’ for me when trawling through the shelves of my local hobbyist shop. So imagine my eyes going all round and shiny when I spotted Krosmaster Arena, with it’s chibi-esque figurines and gorgeous graphics. But is this a case of style over substance, or is there a great game behind the bright colours and encephalitic models? Well, let’s take a look shall we?

Based on the online games Dofus and Wakfu (games with pedigree since they were designed by SquareEnix), Krosmaster:Arena takes these tactical MMORPGs and puts then on the table. Originally designed and released in France, the game was successfully Kickstarted to produce an English translation.

The full game and one of the available expansions

After the unboxing and exclaiming over the figurines (URmaGERDlookatthislittlefella!), what impressed me was the rulebook. The first half is set up as a kind of step-by-step guide of lessons, where a map is actually printed on each page for use with the figures alongside the explanations for the various rules and powers. This is a clever method of teaching I haven’t encountered before, and is perfect for novice gamers or those who like comprehensive intros. If this isn’t your style, the second half of the book is set out in a more traditional style; so no matter your experience or preferred style of learning, you’re catered for in Krosmaster.

Normally at this point I’d dive into the game play, but I’d like to spend a bit of time on the terrain. The board features a set layout for placement of the various terrain features, formed of beautifully rendered cardboard trees, bushes and crates, plus the various sites for gold coins (known as Kama). The board itself is double sided to increase the options, but there is a weakness here: the boards never change. There’s nothing to stop you rearranging the board if you want, coming up with your own setup, but if you’re a purist you’ll rapidly find the board getting a bit ‘samey’. 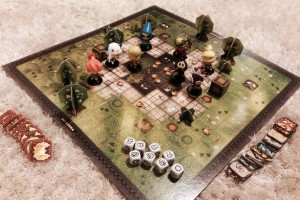 Just a small selection of what’s in the box

OK, so the meat of Krosmaster: the game play. Each figurine (character) comes with a card denoting how far they move (Movement Points), how fast they react (Initiative), how much damage they can take (Health points) and how much they can do in a turn (Action points). The first three are self-explanatory: Movement is how many squares the figurine can move on the board (diagonal movement is not allowed), Initiative determines which characters act first in a turn, and Health is how much damage a character can take before it’s KO’ed.

Action points are used for a variety of activities. Picking up the Kamas, buying new enhancements (equipment/boosts/pets), and using a character’s unique spells (more on this below) all need Action points. Movement and Action points can be spent in any order; so a character could move two squares, cast a long range spell, then move another square and grab a gold coin.

Each character also comes with a set of unique spells. Most of these are attacks, with various ranges and effects like stealing life or allowing a sneaky free backstep to push a character out of danger. Others also allow for healing, or my personal favourite, summoning sheep and chickens to attack your opponents for you! The coloration of the spell denotes how often it can be used, whether it be as often as you have Action points to afford it, once per turn or only once per game. As detailed before, each spell also has a range, which can be line of sight, or can only be cast in straight lines, or even ones that require no line of sight at all.

Luck isn’t entirely removed from the game however. Each attack will do a set amount of damage, but the attacking player also gets to roll a die which can potentially add extra damage to the attack. The defending player also gets the chance to roll dice to try and defend against some of this damage too, so not everything is guaranteed. Certain powers, namely ‘Critical Hit’ and ‘Armour’ allow players to roll two dice instead of one. This is spice to the combat side of the game, preventing encounters getting too predictable and keeping players engaged, even in their opponent’s turn.

It’s here that Krosmaster really shows a surprising depth of game play. Managing your movement around the board to maximise your use of Action points and attacks can be tricky, with forward planning being vital to stop a character being left high and dry to die whilst accomplishing nothing of note. This is the aspect I was most afraid of: the dreaded substance over style, but Krosmaster shows excellent tactical intricacy without becoming bogged down and inaccessible.

So it’s cute, it’s fun to play and there’s a decent level of variety in the base set despite only having two preset boards. So does this game have a weakness? Well, the biggest chink in the armour I could find was the multiplayer. At the start of each game, players are given tokens called Glory Galleons (GGs). To win a game of Krosmaster, players have to steal the GGs of their opponent, either by duffing up their characters or buying them using Kamas. This system works fine in two player, or even teams of two versus two, but free-for-all games rapidly become messy as players lose their precious few GGs. The rulebook is also vague on whether running out of GGs is necessarily the end of the line for your characters. Just be aware of this if you intend to play this with a group of friends: keep the numbers even and avoid more than two teams. 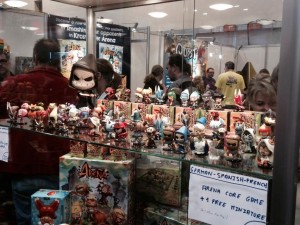 So many new toys!

Something that I thought would be an issue is the long term life of the game. The base set provides 8 different characters with 8 very different play styles, a plethora of upgrades and two boards to keep the players engaged. It’s also clearly a game designed for multiple playthroughs and tournament play. So what have the designers done to stop the game losing it’s glamour? Expansions! The cynics may view this as an attempt to elicit more cash from fans, and it probably was a factor (hey, games are business) but for Krosmaster someone has really thought the expansions through. Each new figurine you buy also comes with a new map with it’s own rules and mini-objectives, effectively a new ‘level’ for the game. Also, each figurine comes with a code you can put into the online game; this then gives you the character in the online version, thus increasing your player base and allowing you to play in tournaments for prizes and bragging rights. This holistic approach to the game design makes Krosmaster: Arena a true game master!

An avid board and card gamer, this displaced Cornishman has spent way too much time playing games and skulking around his local hobby shops. He later escaped to Swindon, the land of roundabouts, where he currently designs games whilst infecting those who stand still too long with his gaming lurgy.
More Goodness
Animeboard gameChibi