previous
RPGing- How I became the Governor of my own planet, got imprisoned and grew a set of gills
random
next
7 people you will play in a 40k tourney and why it isn’t that bad.
Tabletop
0 likes

What if all the myths were true and the children of gods walked the Earth?  That is the premise of the mythic roleplaying game Scion, where players assume the mantle of descendants of the gods in a divine war against the Titans; the embodiments of primordial essence that escaped Tartarus after thousands of years of imprisonment.

From the Aesir (Norse Gods) and the Theoi (Greek and Roman Gods) to the Deva (Hindu Gods) and Kami (Japanese Gods), players have the choice of taking on the role of the children of gods from a diverse range of pantheons.

First published in 2007 by White Wolf, Scion was lauded for its concepts and originality but it became apparent that White Wolf’s Storytelling system was not designed for such an epic scale of gaming, and that games could easily become unwieldy and slow.  Nonetheless, Scion became recognised as a game with incredible potential 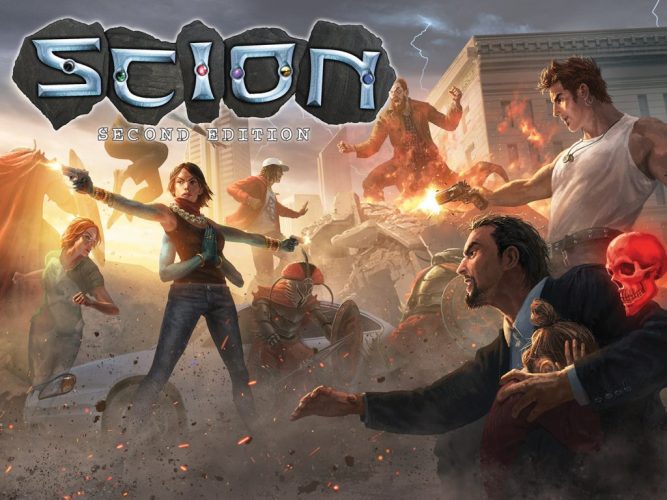 How did you begin developing roleplaying games?

I began developing table top games after being a writer for several years, working on games such as A Song of Ice and Fire and Exalted. Eddy Webb approached me to develop Beckett’s Jyhad Diary for Vampire the Masquerade 20th Anniversary Edition, and that was my first-developed book (though I finished development with Matthew Dawkins).

When describing Scion to friends, I have compared it American Gods, The Almighty Johnsons and the Percy Jackson series, but what were your inspirations?

Those, for a certainty, but also Kieron Gillen and Jamie McKelvie’s The Wicked + The Divine, which posits deities of a similar power level to Heroic Scions as active in their world, openly describing their divinity. If you want to see how things work in The World, definitely pick up the collected trades.

What experience have you had with the first edition of Scion?

I played several first edition games of Scion, and while I enjoyed my characters, I ran into many of the same issues everyone else did, with the mechanics becoming steadily less workable as power levels increased. Still, I was in love with the premise: the idea of modern gods, and of ancient foes and elements coming into the modern world.

The first edition had a fantastic premise but was mechanically broken – how did you overcome these mechanical issues whilst remaining true to the game?

We knew this was going to be an issue going into it. Rather than trying to patch the system, we decided to create a new one from the ground-up, one containing some updates and more of a focus on both action and story potential. This was the Storypath System, and it continues to power Trinity, Scion, Dystopia Rising, and They Came From Beneath the Sea!.

Given the power-scale at work in Scion, how do you mechanically reflect the powers of gods whilst still feeling accessible at the human level?

Scions aren’t able to fully wield the powers of their parents; they certainly have miraculous powers, but they aren’t truly an aspect of The World as the gods are. Scions have powers called Knacks, that are low-power supernatural effects or just action hero movie tricks. They also have Boons that stem from their Purviews, the big miracles Scions can call down. These Boons also grant Scions a measure of control over the World, and the elemental forces within it.

In The Almighty Johnsons for example, most of their powers would be Knacks, especially the “I always win at games” one. 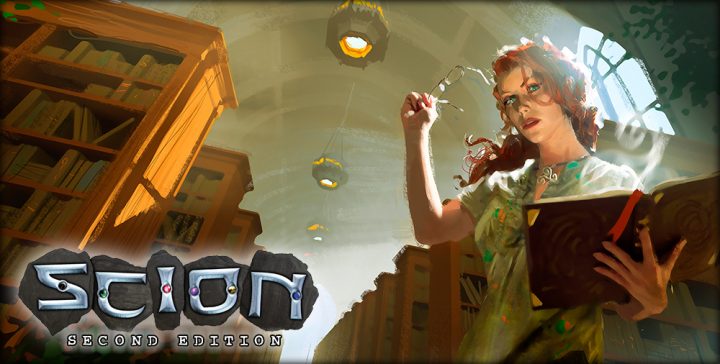 In the prior edition, the pantheons were largely bloodlines, which tied into the children of the Gods being literal blood relations. They were all family to some degree or another, and descendants of those pantheons kept within the family. Problems arose, though, when we tried to address gods existing within different pantheons (like Yama, who’s got a foothold in China, Japan, and India) or the process of interpretation.

So, we’re moving away from that slightly in Scion 2e – pantheons are no longer purely divine bloodlines, but socio-magical constructs within Fate, bound to cultures across the World. Still, I wanted to keep the primary pantheons from the first edition and the Scion Companion, and add in one often-requested by fans: a pantheon native to North America (or at least, one of the many).

How do scions from the same god interact with each other?

Being born of the same god doesn’t even necessarily mean you’re of the same aspect of the God. Gods split themselves into Incarnations, or mortal appearances, and it’s they who birth or sire Scions. Our main story in the Hero core book actually features two Scions of Thor who are children of different aspects (war and fertility).

Are the pantheons united in their fight against the Titans?

The pantheons don’t even agree on whether they should fight the Titans, much less how united they are. One of the big changes from First Edition was moving the Second Titanomachy – the rise of the Titans – to a Cold War-esque setting. Yes, the Titans are freeing themselves, and things are heating up, but there’s a lot of players and moving parts and time for other pantheons to pretend that nothing is happening, or take the excuse of using the Titanomachy to settle a petty personal grudge against another God. It’s a lot more diverse than the siege mentality of 1e, but we give you options in other books to heat up or cool down the War.

What role do the gods play in the world of Scion?

They never went away – they’re still the objects of worship of different religions and they send their Scions and Incarnations down to The World to fulfil their aims and live our mortal lives. The Gods are still here, in spirit and in fact. In The World, the old religions of pantheism were never quite overtaken by monotheism in Europe, though some weathered the changes better than others.

Do the titans remain the sole nemesis in Scion or are there other antagonists in this new edition?

Titans aren’t the only foes – and some pantheons, like parts of the Greco-Roman or Yoruban, are actually pretty friendly with their Titans. We’ve got a lot of diversity in terms of mythological creatures who might have nefarious views towards humanity. We’ve already announced Dragon, a Scion expansion based around playing the serpents of legend.

How is the setting in Scion different to the real world?

The World is the general name for the Scion setting. The World is Tiamat, carved into shape and form by Marduk. It is Rangi and Papi, locked in their embrace while their children war within them. It was created by a wagtail swimming upon an infinite ocean, and by Q’uq’umatz and Tepeu speaking the word “Earth” when floating upon a similar infinite ocean. Atum existed within a very similar ocean, containing all the World within himself, taking the definitions and limits of existence from the Primordial Deities and granting stewardship to the Ennead until he was named. The sons of Burr lifted the earth out of another infinite sea, fashioned from the bones and flesh and maggots of long-dead Ymir.

It is all of these things, even in contradiction to one another, and they are all true. To understand the paradox, to understand the World, you must see it as the Gods do. The World is our base setting, allowing us to treat religions as fictional entities for our use in a game while still respecting the real-world spiritual beliefs and engaging their cultural heritage for games of Scion. Sometimes, this means treating them as cohesive stories contributing to a larger pantheon when the myths surrounding those deities are anything but cohesive. Sometimes, it means sanding down differences.

The World is like ours, though the differences are subtle at first. Belief in the Gods runs strong. Cults and temples take a far smaller place alongside prayer groups and churches, but they’re there, in greater numbers and more acceptance than our world; where you might see a gold cross around a young woman’s neck, it might instead be a hammer amulet on a leather thong, or even a small raven’s claw.  The statue of Christ the Redeemer standing tall over in Rio de Janiero isn’t replaced by Zeus on his throne, but signs of the lightning god of ruling are throughout the city. 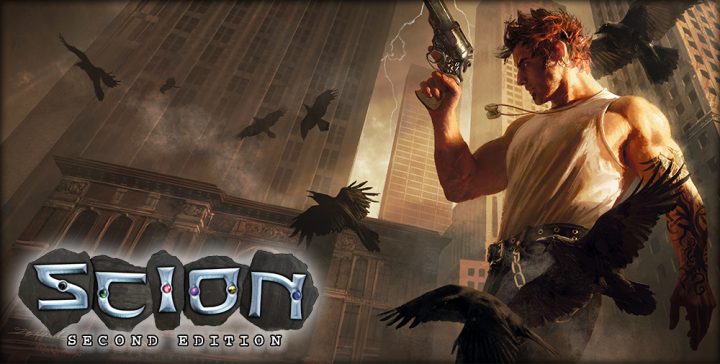 Will scions be able to explore the realms of the gods, such as Tír na nÓg and Elysium?

These are Terra Incognita, and they encompass civilizations and worlds in and of themselves. They are inextricably linked to The World, connected via a specific site called an axis mundi. Cities like Shangri-La, continent-sized islands like Hy-Brasil and planets like Nibiru or Muspelheim orbiting a strange and foreign sky. Humans and other creatures live in them. They cross over, sometimes, into the World, visitors and travellers and emigres and exiles. Sometimes even emissaries.

As the second edition includes the fictional Atlantean pantheon, could there be a pantheon based on the Great Old Ones of the Lovecraft mythos in future releases?

We actually just announced a new supplement called Masks of the Mythos, helmed by award-winning author Chris Spivey (the lead on Harlem Unbound), that will cover this.

Will Scion include the concept of New Gods, such as in American Gods?

Ancient Gods encompass things like media and music. You could certainly have new Gods who claim unique portfolios, and this could lead them into conflict with the ancient ones, but this isn’t necessarily a conflict that must happen.

Can we expect similar releases as with the first edition (Demigod, God, etc) and do you have any plans for releases in other mediums?

We’ve got multiple books planned, including the Scion Companion, Dragon, and Masks of the Mythos. Stay tuned!

Scion (2nd Edition) has not yet been released, but can be pre-ordered in advance; here.

Science Fiction: the final frontier. These are the articles of the freelance journalist Peter Ray Allison. His continuing mission: to explore strange new realms of fiction, to seek out new genres and new visions of the future, to boldly geek where no one has geeked before.
More Goodness
Fantasyroleplaying gameRPG