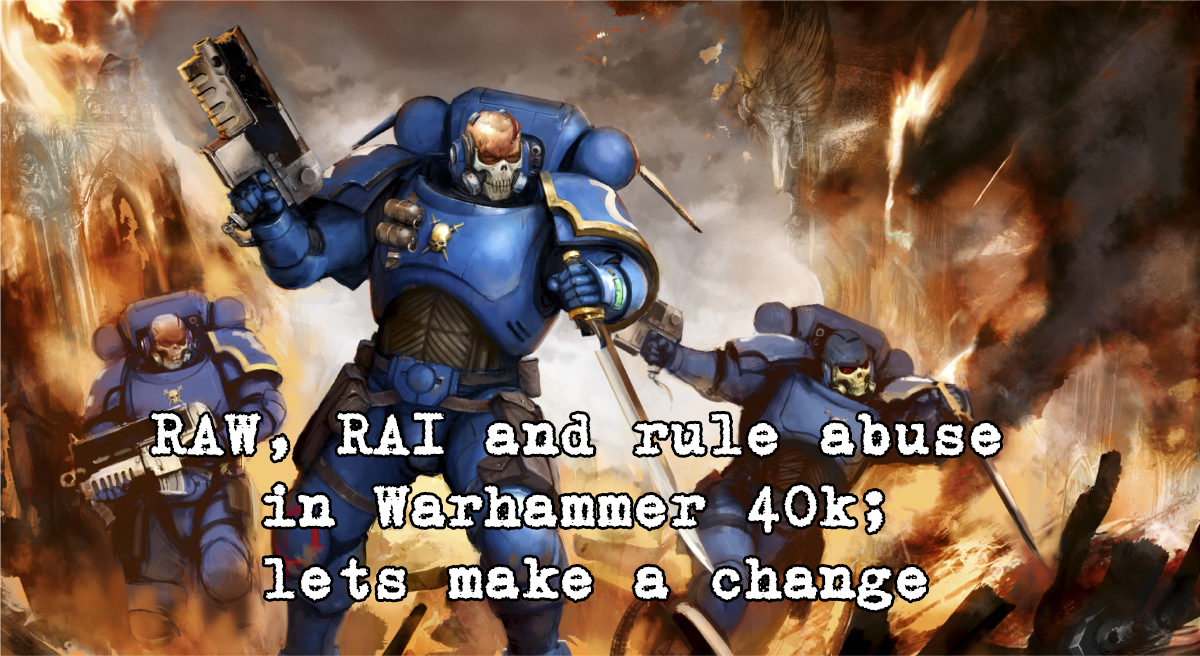 I have been playing 40k since the days of the original Rogue Trader book in all it’s strange and weird glory. I took a small break in between 3rd and 5th editions, but within my time in the game, I never played competitively until 8th edition. Why? Well It seemed a bit more streamlined, and I was finding it hard to herd the group of cats that were friends into playing games at all; kids, mortgages and general adulting have a lot to answer for it would seem. So I entered a tournament at Element Games to get a chance to play, and that was it – I haven’t looked back since.

Some of you may be aware of my views on competitive play and how, despite some unsavoury moments, it isn’t as bad as it is made out to be (check out these articles):

BUT despite this, I do have a couple of remaining bugbears.

As someone who played casually for many years with groups of friends, over numerous editions, figuring out rule ambiguity was mostly a simple case of an agreement that the rules as intended had precedent over the rules as written. In a lot of cases, you could see that the rule was broken, how they had made the mistake in explaining it, and you just dealt with it as intended (If there was a bit more ambiguity, then you house ruled it so all parties agreed it was fair for everyone’s armies). I therefore had a massive shock when I entered competitive play and came up against people who actively sought out and aggressively defended broken or badly written rules to gain an advantage.

As it was taken by everyone about me, it was a case of like it or lump it, that’s how the competitive scene worked – If you wanted to be a part of it, you had to learn about the exploits, use them, counter them or try not to fall foul of them.  So that’s what I did, and after a steep learning curve I just accepted it as part of the game. The problem is, it never sat well with me and you’d have moments where common sense would seem to want to prevail – but you always got trapped within the house of mirrors that represents the circular RAW argument; C’est la vie, I guess.

Now, granted,  I fully understand the arguments for using rule exploits – You will find that some of the current top tier players will spend hours, days, weeks or even months looking for and testing out optimised lists based on optimal use of loopholes that they can exploit for maximum advantage. These people are intelligent, fully aware of how the rules are intended to work over how they actually work, and can be a great source of tactical knowledge once you’ve reviewed their matches, or been on the receiving end – they are, in effect, unofficial and unpaid playtesters who are giving GW a nudge to fix something by their success.

The thing is though, with this being accepted as the norm (and with people like me just going with the flow), we end up with an unbalanced and broken game; One that promotes and favours only specific factions and subgroups, depending on what loopholes have been found. This in turn creates a situation whereupon if you want to win, you have to play as a certain army and so punishes those who just want to play the army they have always played… I’m a Space Wolves player, so I know this very well. It also can quickly discourage new players for their very lack of in-depth knowledge and experience, promoting the perception that having so badly misinterpreted the rules, the game may not be for them.

The counter-argument is, of course, that it’s not our fault GW introduces power creep and can’t write rules properly, we are just playing with what we have. I would accept this, if it wasn’t for the fact that in most of the tournaments I have played in, there are house rules and changes from the official line in the ‘Tournament Pack’ or ‘Rules Pack’ you get when entering. What this says to me is that if there are broken rules, or people abusing specific units/tactics, that it CAN be changed by consensus – Therefore the opinion “Well I guess we need to wait until the FAQ comes out to change it” is just a way of saying “I like this rule because it benefits me to the detriment of the game and other players, so I’ll just drag my heels and wait for the FAQ to come out and get as many wins as I can out of it.” This needs to change for the health of the game, and the players.

Of course, the game isn’t fully balanced at any chosen minute – It’s a dynamic system, constantly being rebalanced by new codex releases and expansions (Plus FAQs) – Inevitably some factions are going to be better than others, based on having newer rules/Codexes, but we shouldn’t be encouraging, accepting or looking for broken rules & exploits – That tips us from one side having a slight advantage to creating a completely unfair advantage for certain people with the time and money to switch what they use to frustrate and crush others – And that’s just not fun to play for anyone except those few ‘winners’.

In the end, we are playing a game, it’s not actual war. There are a set of rules and a general consensus that approximate how specific things work in the real world for a specific effect and feel ‘on the table’.

This doesn’t even touch on the fact that winning by using an exploit is just lame and ultimately unsatisfying.

I would rather have a close and well-fought game that I lose by a well-timed choice and a spectacular intervention by Lady Luck on a dice roll than win by exploit. It’s not cheating, it’s in the RAW but it’s just not, well… Honourable – And definitely not in the spirt of how the rules, and the game, are intended.

So how do we fix it?

Granted, this will not be fool-proof, but it’s a start and it’s something that will bring back the power of how this game is played to us. We can then provide a gaming experience that at least feels a bit fairer and competitive, rather than one that you know will be decided by the army your opponent fields – Whether a specific list, or just certain units, rather than what happens when those models are on the table – Why would you play?

You will know that, if an exploit is found by someone else, or if you fall victim to it, that it can and will be fixed soon and you don’t have to give up playing the army that you want to play. GW don’t have to be the only arbiter, or the excuse for things remaining broken. Blood Bowl was managed by the community for 22 years when Games Workshop stepped away. And yet, GW could come back in 2016 and release a new version without breaking all the community teams with their own, because the core of the RAI were still there, and in line with the RAW.

People still loved and played the game, though not as many, and while there are less units and forces, it remains the truth that the community of Blood Bowl players shed those looking for nothing but an easy victory by cheating. We can do something similar in 40k. They have already taken aboard some of the tournament organisers and players that have either used the loopholes or fought them, so it’s hopeful they will be better at avoiding these issues. In the meantime, we want to play, so we can take some responsibility for how the game is seen, played and presented, or we’ll scare our peers and the next generation away.

Let us know what you think in the comments below and a big thanks to Mark Canty for some insightful points in this article.