Copy and paste rules and system from Edge of the Empire

If you own Edge of the Empire, it may be hard to justify paying for another rulebook for the same system. If you are new to the ruleset or want to run a Rebellion campaign then this is an excellent product that's well worth your money. 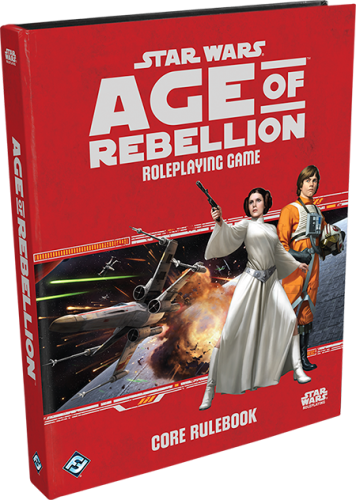 Age of Rebellion is the second Book in Fantasy Flight Games’ trilogy of Star Wars Roleplay games, with the third (Force and Destiny) currently in Beta. Where as Edge of the Empire had you playing as the shady smugglers, scoundrels and bounty hunters of the galaxy, Age of Rebellion thrusts you in to the rebellion where you will spend most of your time fighting the empire rather than attempting to avoid it at all costs.

The mechanics for Age of Rebellion are almost copy and pasted from Edge of the Empire. For anyone that hasn’t had any experience with Edge of the Empire (you can read my review HERE) you build a dice pool based on your skills and attributes to complete a task. Easy, yes? This is probably as similar as the system gets to other games. Fantasy Flight uses custom dice, covered in custom symbols that help decide if the characters have failed, succeeded or somehow have done both at the same time. The different shapes and sizes of dice all have a different ratios of symbols that can help determine success of failure of a task.The core dice you will use are the green ‘Ability’ dice and the yellow ‘Proficiency’ dice. These have negative counterparts called Difficulty and Challenge dice. Your skills, attributes and surroundings will all determine how many dice you have in each pool. Each success rolled can be cancelled out by each failure. If you have one success remaining, you pass the check. There are symbols that represent threats and advantages as well, which give the GM AND player a chance to flex their storytelling muscle by creating unique story driven situations based around these results. The players may succeed in transmitting details of the Hutt’s alliance with a local Imperial commander, but if the player roles threats then they may not have encrypted the message properly, tipping off anyone else who may be listening as well as giving away the players location.

The custom dice needed to play Age of Rebellion will set you back around £10 from your local game store. There is also an app that you can download for smartphones and tablets.

The obligation system has now also been replaced by Duty, which is the characters drives and motivations to fight with the Rebellion, not just on a single adventure but for their entire career in the Rebellion. This is a great GM tool which allows you to throw real personal conflict at the character, as well as providing the player with a good system to round their characters out and make them more than just ‘Rebel Pilot 1’.

As with Edge of the Empire, the amount of species on offer is a little disappointing. I understand why they have limited these, but I’m sure that one or two of them are types from Edge of the Empire or one of the expansions rather than being brand new. There are also loads of new ships, as well as rules for capital ship combat, which are really well formed and can make something that could be quite slow seem really exciting. It also gives you the ability to use the Fantasy Flight X-Wing miniatures range as well as their new Armada system in your game to show ship combat. I don’t think this was by accident.

It is really difficult to review this game without setting up an Edge of the Empire vs Age of Rebellion conversation, as the games run an identical system and have been released by the same company. They could have easily fit this in as a larger game supplement and charged less for is rather than making it a full price rule book, which is valid argument especially if you want to run both styles of games. Having it as a separate rulebook means that people who aren’t interested in playing Firefly in the Star Wars universe (which is what Edge of the Empire is, really) and want their players and campaigns to be Rebel focused don’t need to buy a rulebook and then a £25 expansion. It’s a hard balance to find, but I think Fantasy Flight have, again, made the right call.

With all of the above said, it’s only fair that I mark this game as a stand alone and it’s hard to argue with anything. The artwork in beautiful, the layout of the book is perfect as well as the tone and language used. Having played Edge of the Empire, I know that the system has a couple of niggles (the advantages and threats can sometimes get in the way, especially when you just want to know if the player has succeeded with a task) but nothing major and nothing that breaks the game. When reading the rulebook feels like a pleasure, and the mood of the Rebellion is so well written, I honestly can’t recommend Age of Rebellion enough.