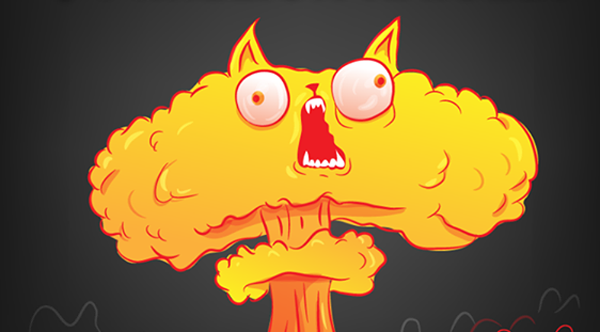 Exploding Kittens is a prime example of what happens when you combine three things the internet loves- namely cats, The Oatmeal and crowdfunding.

The card game (thought up by the trio of Elan Lee , Shane Small and Matthew Inman) features Inman’s instantly recognisable art seen on the phenomenally popular website The Oatmeal. The Kickstarter campaign has quite aptly exploded, managing to rack up over $1m in pledges in just 24 hours and it’s still climbing, currently sitting at a hefty  1.5 million.

The game is simple,

Exploding Kittens is a highly strategic kitty-powered version of Russian Roulette.  Players take turns drawing cards until someone draws an exploding kitten and loses the game. The deck is made up of cards that let you avoid exploding by peeking at cards before you draw, forcing your opponent to draw multiple cards, or shuffling the deck.

Anyone interested in the game which involves catnip sandwiches and weaponized enchiladas amongst other things should check out Exploding Kittens Kickstarter.

Andy Haigh started writing to counteract the brain atrophying effects of Retail Hell, now it's an addiction. Andy is an unrepentant sequential art absorbist and comics are one of his passions. Other interests include Film, Music, Science Fiction and Horror novels and quality TV like Game of Thrones. He can talk about these at great length if only someone would listen. He lives a somewhat hermit like life in The Shire, spends too much time on social media and is still waiting to go on an adventure.
More Goodness
Andy HaighbreakingCrowdfunding