- Light-ish mechanics and fast pace turns make this ideal as a gateway game or end of evening game.
- The production quality and wooden components are excellent!

- Longevity may be an issue with the set board.

Via Nebula is a lovely game with light-ish mechanics and enough depth to keep all players engaged. It's beautiful production and well designed rulebook mean players can dive in quickly and get to exploring. My one reservation is whether VN will still be played after five or six play throughs. All in all, a cracking game I can thoroughly recommend, especially to someone looking to introduce a meatier game to newer gamers.

Lots of good looking gear in this box! 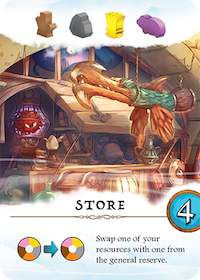 An example of one of the building card

Some of the exploitation tokens (with pig meeples!)