A fast and fun miniatures game that has plenty of replay value.

The first thing that you will notice when opening the core box is that there are only three miniatures, one X-Wing and two TIE Fighters. The next thing you will notice is a boat load of cardboard tokens. Included are ship and pilot cards for both factions as well as a selection of upgrade cards. There is also a quick start  game that gives you a nice overview of the very basics of the game as well as a paperback rule book, the quick rules being an excellent way of introducing yourself or someone new to the core mechanics. 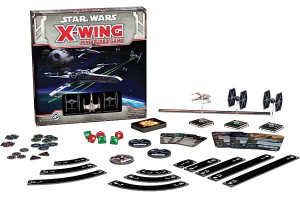 Each round of the game is broken down in to four phases: Planning, Activation, Combat and End. In the planning phase, you use each ships manoeuvre dial to select how each of your ships will move and then place it face down so your opponent can’t see. In the activation phase, players reveal each manoeuvre in order of pilot skill (shown as an orange number on the base of the miniature and on the ship card) and you then move your ship along the corresponding cardboard template. This is also when you can activate different abilities that your ships or pilots have. The combat phase is an easy range finder and dice rolling mechanic. Finally, you remove any tokens from the board, check to see if anyone has won and if not start again. It’s a simple system that rewards forward thinking and anticipation as both players are trying to guess which way the other is going. You also have to keep tabs on the order which your ships are moving, or they could end up flying in to each other.

A full rules game out of the box will last for about an hour. 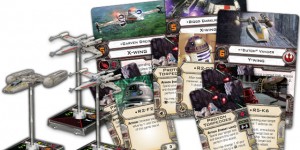 The quality of the models is very high, with good details and colouring. They are pre-painted and assembled, so you can open a packet, mount it on the base and be flying straight away which is a great thing. I have always been wary of pre-assembled models but these really are great. There is also quite an active modding community, giving hints and tips for personalising your ships should you want to run different colour squadrons from the films. The ships are also to scale, so your X-Wings and TIE fighters are to scale with each other as well as bigger ships like the Millennium Falcon and Slave I.

If you enjoy the game, the urge to expand your force past the core box will hit you quickly and the model selection is really good at the moment, as we are in to the fifth wave of releases. The biggest problem here is that you will  drop a lot of money. Each fighter costs £11 each. For one model, this feels really expensive, and it is. With each ship you will get relevant pilot cards and upgrades as well as a card detailing any special rules that the ship may have which aren’t covered in the core rulebook. Fantasy Flight have also released larger ships, and both the Rebel Transport (includes and extra X-Wing) and Tantive IV are now on sale. These are priced at £49.99 and £75.99 respectively. The larger ships are not to scale with the fighters, but they use a ‘feels to scale’ size. These larger ships come with new rules that make them feel huge in comparison with slower movement and larger weapons ranges. They are also entirely optional and not something you need to have to play against your friends.

If dropping £11 on a model you aren’t sure you will even use feels too much, there are some unofficial online squadron builders you can use that gives you ship and pilot breakdowns as well as points values so you can make sure that you will be sticking to your games point limit.

X-Wing is tactical, fast and a lot of fun. High quality models paired with a first class system and a ton of customisation makes it one of the best miniatures games you can buy.  It’s also very expensive, although not to the extent of other miniatures games and the cost may be enough to put some people off. If that isn’t an issue, this game is worth your time and money.