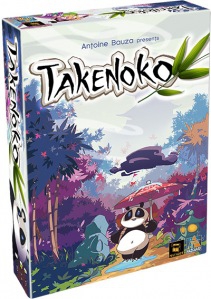 Straight to the Point – Cute and laid back fun, plenty of strategy. Just be prepared to add new mini-rules in each playthrough!

He’s cute, he’s cuddly and by the end of this game, you’ll be shaking your fist at him and yelling ‘DAMN YOU FAT PANDA!!’

Takenoko puts you as a member of the Japanese Emperor’s court, charged with building a bamboo garden for a very special gift from the Chinese Emperor; an adorable and voracious panda! Layout the garden, cultivate the bamboo and keep that black and white menace well-fed.
The garden itself is comprised of hexagonal ‘plots’, which are either green, yellow or red. The colour of the plots dictates the colour of bamboo that grows in that plot. Bamboo consists of clever little wooden pieces that stack up, with each plot able to support a maximum stack of four bamboo.

So how does one go about making a garden fit for our chubby protagonist? Players get to perform two actions in their turn to help them achieve their objectives (more on this in a bit). Draw plots allows the player to draw three plot tiles from the top of the face down plots stack, pick one and place it next to the other plots already in play; the two unselected plots go back on the stack face down. The gardener action allows the player to move the long-suffering gardener; when he lands on a plot that has irrigation (see below) a section of bamboo of the matching colour grows on this plot and all irrigated plots of the same colour surrounding it. The panda action lets you move the panda to another plot; if the plot contains bamboo, he’ll eat a section of it, which the player gets to keep to complete his objectives. The Irrigation and Objectives actions allow you to collect Irrigations channels and Objectives cards respectively.

On top of these actions, the player also has to roll the Weather die, to find out the weather conditions for their turn. The weather has numerous effects, including allowing the player to take three actions instead of two, or pick up a special bonus chip that allows that player to improve a plot, for example fertiliser that means bamboo grows two sections in this plot instead of one. My personal favourite weather is the Storm, which scares the poor panda so much he runs to a new plot in the garden and consoles himself by eating some bamboo! The weather die adds a nice touch of chance to the game, without it becoming a dominating factor. Players will still have to plan their turns correctly to maximise their turns and achieve their objectives.
Irrigation is one of the more tricky elements of the game. Like any garden, the bamboo won’t grow unless it has water. To get water to the outer plots of the garden, players need to lay the irrigation channels they collected in previous turns, leading from the spring tile in the middle of the board. Irrigation is vital to completing your objectives: without water, bamboo won’t grow and none of the objectives are possible. Collecting these channels therefore becomes a priority later on as the game progresses, adding a layer of tactical choice to proceedings.
So you’ve got an impressive garden, bamboo all over the place and a panda so stuffed it can hardly waddle from plot to plot. So what’s the point? Each player is given three Objective cards at the start of the game, and an action to collect more as the game progresses. These Objectives cards come in three flavours. Plot Objectives require the player to arrange the different coloured garden plots to match a picture on the card; the kicker is that all the plots must be irrigated as well! Gardener Objectives require the player to grow the bamboo to match the number and height of bamboo stacks on the card. Finally, the Panda Objectives require the player to get the panda to eat the number and colours of bamboo on the card. Once a player reaches a set number of completed objectives, the Emperor will come to view the new garden, and the player gets to take the Emperor card. All the other players get one last turn to try and complete enough objectives to take the title of Emperor’s favourite!
The cleverest aspect of this game is the communal competition required to get your objectives complete. Since the garden, bamboo, gardener and panda are all controlled by all the players during the course of the game, it becomes completely feasible for someone to inadvertently complete the objectives for other players, so it pays to keep an eye on how other players are running their turns; are they placing lots of red tiles? Are they moving the gardener to certain colours of plot? Send in the panda and scupper their growing (pun intended!) plans, nomming away the bamboo before it reaches the height your opponent needs!
The rulebook is well written, with each player also getting a player board to act as a reminder for what a player can do each turn. Unfortunately, the one marring factor in the rules set is the plethora of ‘mini-rules’ that need to be remembered. These mini-rules dictate minor aspects of the game, such as how plots must be placed, how the gardener and panda complete their activities, which plots grow when, etc etc. The number of times I’ve played Takenoko to find I’ve missed some minor rulette can grate a little.
One thing I’ve heard said time and time again about Takenoko is the gentleness of the pace. This isn’t a criticism; the turns are short with low player downtime, but the game just feels calm and relaxed. Win or lose, everyone I’ve played with so far just seemed chilled by the end. This is a novel concept for me in board-gaming, where most games come with a sense of tension. It makes Takenoko a nice change of pace when you’re feeling like something light and easy-going.
The artwork is nothing short of superb. Cutesy graphics and an oriental twist really set the scene. The components are solid and well coloured, and so far my own copy has stood up to some serious playtime without looking tattered. The wooden bamboo components add a nice touch, as do the exquisitely moulded and painted panda and gardener miniatures.
Images courtesy of Boardgamegeek and Asmodee
Share
Facebook
Twitter
Pinterest
WhatsApp
Linkedin
ReddIt
Previous articlePapers, Please Review – 8 GPP’s
Next articleMan Up and Support Female Leads