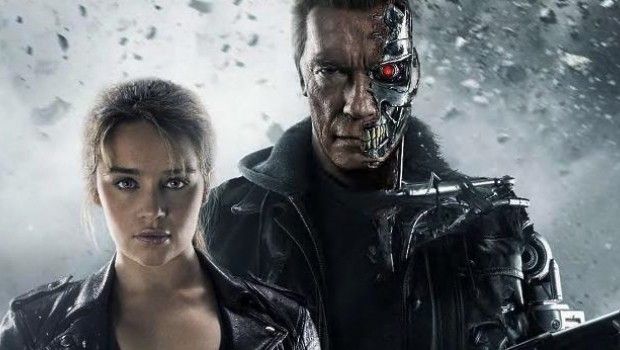 This summer, I have managed to take some time out with friends to watch the big films of the summer, ‘Mad Max‘ and ‘Jurassic World’. When they said they were going to check out the new Terminator film, I’ll admit that I hesitated. I’d seen Salvation, and knew that the franchise was no stranger to disappointing fans.

And I have to say…much better than I had first thought.

Okay, so the story starts essentially like the first movie, only from the perspective of Kyle Reese. Now to his credit, Jai Courtney isn’t terrible in the role. I mean, it is a marked difference from the scruffy-looking original, but not too bad – although a little too Modern American Hero character type for my taste (yeah, try keeping all that muscle mass in the post-apocalyptic world…children must go hungry to keep those bad boys in shape). From here we get one of the best decisions by the director a shot-for-shot remake of the scenes from the first Terminator. I have got to admit, watching scenes which I recognized invoked a nostalgia I did not expect. From the conversation between the Terminator and the unsuspecting three punks, to Kyle Reese sneaking thorough the store (hell, even the Nike product placement matches the original…WITH THE SAME SHOES! They had to get Nike to remake those shoes so they could be included in the film).

The film then comes into its own as it follows its own plotline, and I have to say…it’s some pretty good writing. Time Travel is something which was sorely lacking in Salvation, and Genysis more than makes up for it. It also gets into some very multiverse-theory material, about how different futures can appear. Whilst there is “wibbly-wobbly, timey-wimey” talk to explain it, I found it logical to follow.

But the throwbacks to previous films are consistent throughout the whole film, but not in a way which deters from the enjoyment. They don’t seem to force them in – hell, even the “I’ll be back” line doesn’t seem that unnatural…I mean, laws of time travel means that the line HAD to come up again.

As much as I liked it, there are still some issues. My main gripe – the marketing department.How bad could it be? It seem like the marketing teamdecided to test the limits, which left even the Director a little dumbfounded.

THIS WAS THE SECOND TRAILER AND THEY REVEAL A CRUCIAL PIECE OF PLOT INFORMATION! IF IT IS MEANT TO SERVE AS A PLOT TWIST IN THE MOVIE, THE IDEA IS NOT TO LET THE AUDIENCE KNOW ABOUT IT BEFORE THE MOVIE IS EVEN SHOWN!

The fact that this clunker managed to slip into not only trailers, but the even the posters were tainted spoiling film-goers who had avoided the trailer only to be met with this before they even see the film.

Another problem I had with the movie is that it is so clear that they want to have another two films, and make this their own trilogy. Questions left unanswered, that mid-credits scene (yeah, they have one of those too), it all points to a huge sign saying “IT’S NOT OVER”. It sequel-baits almost to the point of arrogance, where it seems so confident it will be given another film that it practically creates a bingo list you can take to the next one (if it gets greenlit) and check off…or, more likely, add even more questions.

There are also several plot-holes I take issue with in the writing (John-Bot in public, physics taking a break for helicopters, Genisys connecting home tablets and the missile defence program among some other minor things), and a weird choice of music to cover the end credits (I never saw Terminator as the Pop type)…

Aside from the fact that a core plot element was spoiled, it managed to deliver more than I expected it to. It has action, time-travel, throwbacks, and…given what I was prepared for, it surprised me. The acting is watchable, the story enjoyable, and I will be shelling out should they decide to make a sequel to answer all those questions.

So hasta la vista Genysis, you did good in my books.