This should have been the biggest toy this Christmas, and I’m amazed that anyone doesn’t own one yet, but then, even if you have heard of Google Cardboard it sounds so ridiculous that most people just think it’s not going to be any good.

Cardboard is a DIY folding cardboard smartphone mount allowing you to view stereoscopic 3D, which includes 3D movies and VR apps. It was created by Google engineers David Coz and Damien Henry in the “20% time” and released last year as a goody bag freebie at Google I/O. It’s half old school Viewfinder, half poor-mans’ Oculus Rift, and completely awesome! 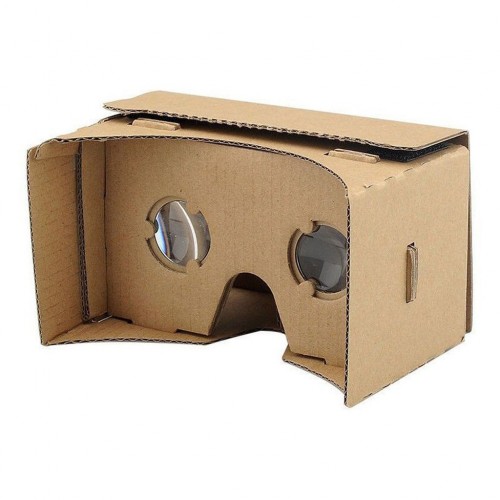 Depending on how much you want to spend you can get a variety of different options. Google have made the plans and schematics freely available, so you can buy it from lots of places or even print and cut your own. There are versions available in fancy prints, in foam, neoprene and plastic, though my recommendation would be the basic cardboard with printed instructions, unless you enjoy the challenge of putting it together with only a 10 second gif to guide you. Most of the ones available online come packaged in a neat little bundle with lenses, magnets, velcro and sticky tabs already attached and lined up. You can pick up a cheap one for as little as £5.00. 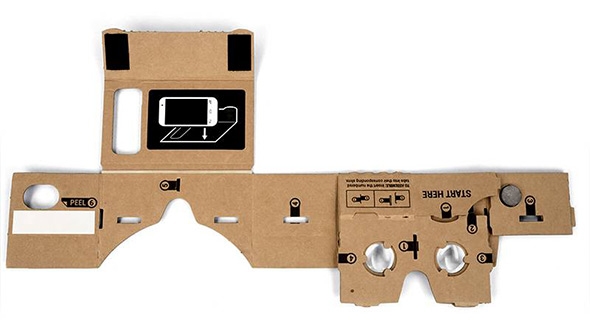 This is when people lose interest, it’s so cheap, so easy that it’s hard to imagine it would be that good, in fact a lot of folk assumed it was a poorly timed April Fool’s joke. The thing people have always said about VR is that it has to be seen to be believed, and with this incredibly accessible device anyone can have a go, and finally see what all the fuss is about.

Right now there’s really not many practical applications for it (which is why I call it a toy) but along with the free release of the hardware specs Google have also released the Developers Toolkit, giving the ability to make immersive 3D VR apps to anyone with the knowledge and creativity. There are new apps turning up quite regularly as people get to grips with the software, and things can only improve from here, although even now there is plenty to keep you entertained. If you’re googling right now for your newest plaything let me give you my rundown of the best apps out there right now.

The first app needed is Google Cardboard, which includes a 3D tour of the Palace of Versailles, a quick spin on Google Streetview and a brilliant little animation about a mouse. It’s basic but this one is essential; this is what I start with whenever I make someone have a go.

Next Orbulus, a photo sphere viewer. This is a regularly updated collection of photo spheres, with locations such as the Pyramids of Giza, Oxford University and San Fransisco Chinatown, all full 360, zoomable and in stunning 3D.

Once Orbulus has got you interested it’s worth getting Google Camera, which includes the ability to take your own photo spheres. Obviously they aren’t 3D, although some of the new camera hardware in phone might make this possible soon, as stereoscopic 3D just requires 2 images. As it is, you use the phone to take a full 360 photo, similar to how you take a panoramic. It can be a fiddly process and is better suited to outdoors or large spaces but is well worth the effort.

There are a few roller coasters available, my pick is Roller Coaster VR, but Dive City Coaster also has great reviews. This is one to impress people with, get them standing up and watch them wobble about.

Next up is a weird one, Glitcher VR. It utilises the camera to show you an augmented reality. Like a lot of Cardboard apps in these early stages, this is more a demonstration of what is possible. Glitcher has a set of weird effects that it applies live to the images from the camera, giving you predator vision, selective colour and a load more eye-watering, mind-bending ways to view the world. I admit this one doesn’t have lasting play potential, but is great for showing to people and does give an inkling into what VR/AR could be capable of.

There are a few games out there, each getting closer and closer to being a proper working game, but it’s early days yet. The Height really interested me, as it doesn’t require a hand controller and allows you to move. It’s a simple platform gem-collecting game, you continually move in the direction you are facing unless you look straight down to stop or start moving. Even in this early form it’s very immersive and pretty good fun!

Finally, another one that’s just really interesting, DeLaze: a tetris clone that uses separate images on the two screens to promote eye strength and help to correct lazy eye and strabismus. It’s currently still in beta but you can sign up as a tester from their Google+ page. There are other companies working on similar games for Oculus and Durovis Dive, and early testing seems to show that rather than sending us all blind, stereoscopic VR might actually be able to help improve eyesight and cure medical conditions – amazing!

So, in conclusion, skip a coffee or two, cheap out next pub night, rummage through coat pockets then go out and buy yourself a new toy that really is something you’ve probably never seen before, a whole new world of technology, available to anyone and very possibly the ‘Next Big Thing’. Enjoy!