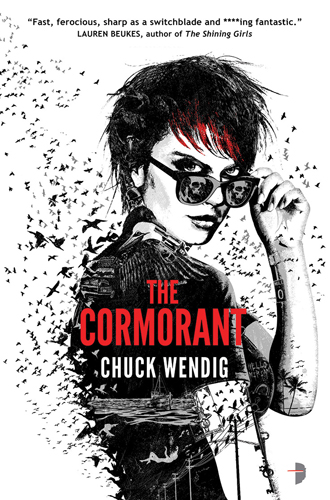 The Cormorant is the third book featuring the on-going misadventures of Miriam Black.

Miriam has a gift, or curse as she usually sees it, skin on skin contact with a person gives her a detailed vision of how and when they are going to die. This has made Miriam’s life somewhat complicated to say the least.

Getting an immediate and detailed view of how family, friends and anyone else is going to die just by touching them has made Miriam into a loner. The endless visions, a mixture of the brutal, burning to death in a car crash, the tragic, cancer ,and the pathetic, choking-on-a-sprout-whilst-eating-dinner have made her shun her fellow man for the most part or use them when necessary .

Miriam is a street smart, foul mouthed outcast with a scathing razor sharp wit and a contempt for the whole of humanity who learned the hard way that people can’t be saved, ‘fate finds a way’.

Along with her gift Miriam is also plagued by horrific hallucinations of those whose fates she has been involved in which often mock her and question her actions . She named this tormentor The Tresspasser, Miriam is unsure whether these are just manifestations of her guilt at failing to save those she encountered or something else.

This story finds Miriam in the custody of two individuals with an interest in her gift, it’s through Miriam telling them her story via flashback that the events unfold. The catalyst for her current situation? After heading to Florida, to pick up a fat payment from a wealthy businessman with an interest in how is he going to die, she sees that not only will he be brutally murdered but the murderer has/will leave a message for Miriam.

It should be said Chuck Wendig isn’t for everyone, the easily offended should go elsewhere. The Miriam Black books are pretty no holds barred and have smashed through various taste barriers like a runaway freight train.

Wendig’s prose is coarse and strong like a shot of whisky. He also proves time and time again that he is the master of the metaphor, ‘you look like a tracksuit wrapped around a bunch of trashbags’, and memorable chapter titles like ‘ The sunshine state can go fuck itself’, are an indicator of what to expect. The Cormorant is slick and well crated, rejuvenating the much maligned urban fantasy with a dash of the supernatural, plenty of hardboiled noir and a twisted sense of humour.

Miriam’s scathing and savage wit is one of the delights and her take on the ‘friend zone’, when a would be suitor questions her refusal to sleep with him, is as sublime as it is caustic.

With Miriam Black Chuck Wendig has created an enduring character, not only an afflicted outcast but a fearless heroine in the guise of the anti-hero.