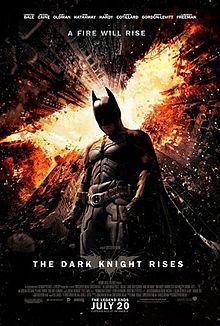 Straight to the point: It’s Epic! Best film I have seen this year, including The Avengers.

I won’t be hitting you with my patented long, drivelling reviews for the new Batman film, simply because I can only say “it’s awesome” and “how epic was that?!” so many times before you get bored and switch off. Also I don’t want to go into too much depth, in case some of you still haven’t seen it yet (if you haven’t, why not?! ) and I spoil all the really good bits!

It’s just Epic, in the true sense of the word– 11000 extras being used for the battle at the end alone, stunning cinematography (that’s a given) and suspense up to your Batmask! I honestly was on the edge of my seat for most of of the film and at the end had to bite my fist.. got rather emotional.

Bane – Bane is just an ultimate badass and in my opinion nearly on a par with the Joker in terms of  best Batman bad guys (blasphemy!). Tom Hardy’s intense acting suited this tortured souls character well, even if the accent took a bit of getting used to.

Catwoman –  Anne Hathaway plays the Anti- Hero Catwoman perfectly. You get a sense of moral turmoil, despite her cold exterior, as if she believes what she does is right but cant quite  shake the struggling ‘Goodie’ within; something that gets stronger as her encounters with Batman increase and the movie goes on.

Blake – Joseph Gordon- Levitt (do you remember him in 3rd rock from the sun?) is a Dark horse of an actor and doesn’t seem to have been type cast… yet. It is apparent that in recent years he has found himself a nice niche as an agent / action hero type, something I wouldn’t have pinned him to, but was pleasantly surprised after inception and, of course, TDKR. His character, Blake, plays a key role in persuading Batman to come back and shows, in himself, what Batman had lost in the time elapsed after Harvey Dents death…. There is other stuff I want to talk about Blake but I can’t….too many spoilers…. ooouwwwwww!

Batman, Alfred, Gordon and Fox – I am throwing these guys in here together because they are a constant in all the films and each play a pivotal roll in making the story what it is. Bale is by far the best Batman and I’m actually gutted there won’t be anymore with him in it, Caine is just amazingly good and adds an emotional level to the whole affair; Oldman personifies the commissioner for me now and Freeman is the calm before the storm, the ying to Batmans yang (or is it the other way round?); where as Alfred is the father figure, Fox is the voice of reason; plus people have always liked the sound of his voice (or so family guy tells me)

The Twists – towards the end, TDKR hits you with a few twists, one I think most people will see coming but another just comes straight out of left field. I wont ruin it for you but , OH EM GEE!

A comment on social class and social integrity at times of strife – something I have quite liked throughout the 3 films is the moral choice being laid on society. In TDKR’s case, Bane (Mini spoiler alert) takes control of Gotham and society starts to degenerate into class war; with the rich being ousted in a neo-communist esq revolution…. A commentary on ‘Mob Mentality,’ (Check out Derren Brown’, “the Gameshow”) as in, if enough people form a group then individual morals diminish as said group gets bigger  and are more likely to accept bad things happening by their own hand because, “the mob” can be blamed as an entity and so absolving an individual person of any wrong doing.

Dang, I missed – There is a scene at the end of the film that most will have seen in previews, where the GCPD square up to Bane’s mercenaries; in a medieval style battle to the death. All very epic, except that when the GCPD start charging, the heavily armed mercenaries open fire! Oh no, this isn’t going to end well you might think, the mercs have state of the art, fully automatic machine guns and the GCPD are all grouped together in a tight formation; there can only be one end to this heroic charge… a few cops killed, some minor flesh wounds and a lot of shooting at the ground in front of them? Huh? These mercs were obviously trained at the Storm Troooper School for sharpshooting.

Arkham Asylum? – something that didn’t really dawn on me until after but there is no mention of Arkham or the Joker, you would have thought with Bane taking over the city, this would have been one of the first places he would have gone?

Now generally when I add #niggles’ to my reviews I wont mark them above 8 or 9, the more niggles the less I generally give,  BUT in this case I’m going to have to give it a 10. In the end, niggles aside, I truly did enjoy it.. A LOT! (Despite my geek mind picking at it) Some reviews I have seen compare it to TDK and say it wasn’t as good, so mark it down. Personally I take each film on its own merits and after watching TDKR I have no qualms about awarding full marks, just for the sense of awe and euphoria it gave me during the film and when I left…suffice to say I will be going to see this again… and again!

Ok, Ok so maybe a bit longer than I thought it was going to be but it would have been A LOT longer had I not curbed all the spoilers I wanted to talk about!