The Heartbreak of Half-Life 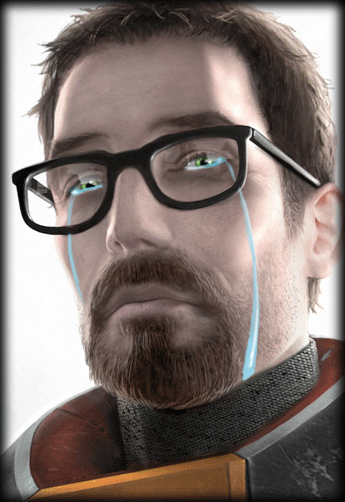 The air is acrid, thick with the vapour trails of stinger missiles and gunpowder. Spent shell casings litter the forest floor and the roar of my buggy engine is the only sound that perforates the post battle silence. Moments ago, determined screams of the Resistance echoed through the trees as Striders fell hard through the forest canopy. The ground shook as one by one the machines fell, finally a victory against the Combine forces that would ultimately bring a close to an endless war which had seen the human race enslaved, slaughtered by the billions. I sip from my cold cup of coffee, and think to myself…

Victorious smugness turns to curiosity. Our silent hero, one time Black Mesa employee of the month Gordon Freeman, listens attentively as the Vance family lay out the next move. We’re taking the battle to them and it will be like nothing we have seen before.

Without warning the roof tears open, and a floating space potato hovers into the room and administers a beatdown worthy of Hulk slapping Thor across the heli-carrier floor. Within a heartbeat, Eli is dead. Alyx is weeping. Dog has once again saved the day, but the aftermath is horrific. The rage I feel is unquestionable. I will, I must destroy the Combine and everything they stand for.

Gordon still hasn’t said anything. He might be blinking a bit. Merle Dandridge, the voice actor behind Alyx Vance delivers an utterly heart crushing final scene that makes me emit a sound like a dying seal. I am twenty seven years old and sobbing into my keyboard.

I am going to kill EVERYBODY. My wrath will be felt in the four corners of the Multiverse. The Combine have no idea what is coming.

Fast forward almost ten years to 2016. Alyx is still cradling the dead body of her father and Gordon is still stood there silently. Blinking and breathing but not offering a great deal to the very awkward situation that he’s spent the last nine years in. I am now thirty five years of age, and I am still waiting for some closure.

You could argue that there are short films and stories. You could argue that the Portal games offer clues and trivia that help the player discover what happened to Gordon and Alyx after their ill-fated space potato rumble. I am completely unsatisfied by these. What I want to see is for Valve to live up to the promises that they made, that Half-Life would be an episodic gaming experience like no other. The only other time I felt this much heartbreak was when Firefly was cancelled but even then the fans were rewarded with Serenity, which did in turn provide a completely fresh agony.

Damn you, Whedon. Damn you to Hell.

Valve, let us pick up that crowbar one final time.

It’s highly unlikely at this point that fans will ever see the release of Half-Life Chapter 3, Half-Life 3, or even Half-Life : Alyx and Gordon Retired to the Maldives and Drank Rum From Coconuts Forever. I just cannot see any kind of closure arriving anytime soon. Half-Life was a game of the time, a simple run and gun shooter with a blistering storyline. A voiceless protagonist who had more emotional depth than any recent efforts at Lara Croft (“climb Lara, climb! You MUST believe in yourself!) or the endless stream of dull Assassins who recklessly free run across twinkling cities. These days FPS games are littered with cover systems, RPG elements, parkour and more. This is no bad thing by any means, but that isn’t Half-Life and I cannot see how Valve would be able to create a marketable final instalment to this beloved series without seriously overhauling the core mechanics of gameplay.

Would the game benefit from modern gaming tools? A slow-motion inducing weapon wheel that pops up over the action? A skills tree? Customisable outfits that… No, I can’t. The HEV suit must remain untouched, scuffed and orange, still sticky with the bodily fluids of beaten head crabs.

I am still waiting. Every article that bellows “HALF-LIFE 3 ANNOUNCED” makes me jab a finger through the screen of my iPad. Every YouTube video that promises to finally reveal gameplay breaks my ageing heart.

If the end of the world arrives before the end of Half-Life comes, I will find Gabe Newell in whatever follows this Earth and I will follow him around carrying a tuba making loud honking sounds for the rest of eternity.

Or until he hands me a CD with Half-Life 3 scribbled on the front of it.

Tell us about your favourite Half-Life memories! Your epic moments. Did you take down twenty three Combine soldiers with nothing but the crowbar and six percent health? Did you corner yourself in the prison defended by bullet spewing turrets? What do YOU think Valve would need to introduce to the series to make it relevant to a modern audience? Pull up a fat chair, brew a coffee and hit us up in the comments. 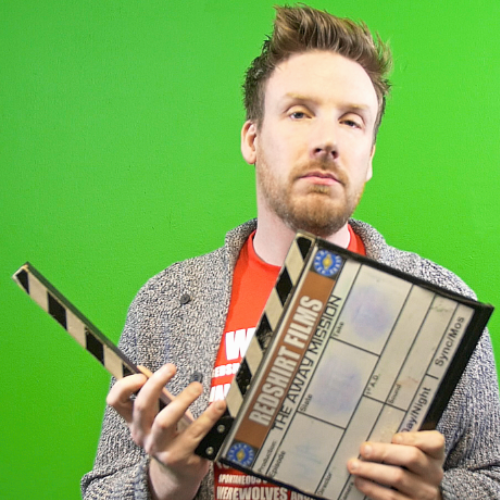