previous
Geek Pride Battle Of The Bands : Mike's Pick
random
next
Looking Back at the PS3 Era

Firstly, some disclaimers, because my lord, do you lot like to bitch and moan:

Right now THOSE people are out the way we can get to the sweet, juicy goods. As you lot are aware, Adventure Time is a thinly veiled deeply adult drama about a post-apocalyptic world in which the last surviving human attempts to find his place in life with a hetero life partner he shares a stolen tree house with. Add in a myriad characters with diverse and quite often heart-wrenching backstories, You have the makings of an incredible show. 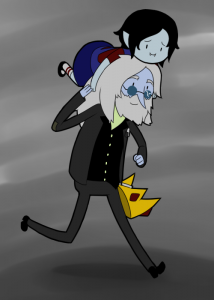 There are many utterly cranium melting moments that have had me gasp, choke on cereal and exclaim “what the fuck?!”  But I now have the absolute honour of coming up with a theory that NO ONE has seen, reblogged, twittered, tumblr’d  or shared before:

In case you’d forgotten, Ooo is the name of the world after the “great mushroom war” that had  taken a chunk out of it, as first seen in the globe in  the episode “5 Short Graybles”

I really hope they got rid of Australia. Seriously, look up drop bears.

But where did the name Ooo come from? My suggestion: The Doomsday Clock.

The Doomsday Clock is a globally recognised fictional clock that represents how long it would take for nuclear holocaust to happen; the closer to midnight, the closer we are to global annihilation.It has been a trope since the late 40’s and the closest we have ever been is two minutes to midnight. Iron Maiden once wrote a bitchin’ song about it, but that’s not really the point. Jeeze, stay focused. Oh, alright then.

Anyway, from the evidence given by technology in Adventure Time such as BMO and Princess Bubblegum’s calculator , we can denote that the world had reached the digital age.Now hold onto you white and pointy hats folks, ‘cos this is where it gets interesting.

On the digital clock in 24 hour time, two minutes to midnight would look like this:

Please don’t feel patronised, this is necessary part of the theory. For you see, midnight, in digital 24 hour time in some clocks is this:

0:00. Midnight. The time in which according to the Doomsday Clock the apocalypse happened. What if OOO wasn’t the sound, but the numbers Zero Zero Zero?

“But Mike, you handsome wayward stallion” I hear you cry “I, Grammar Nazi have spotted that the land of Ooo is only capitalized initially, rendering your theory completely invalid!”

And you’d be totally right, if this official Adventure Time map of “OOO” didn’t exist. 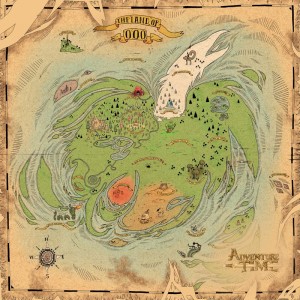 Got Your own theory about Adventure Time? Comment below, on the Geek Pride fb group, or tweet us @GeekPride1 . Apologies for all the brain that came out of your ears.

*legally. Pirates are for films, TV and Somalia , not for watching TV shows.

Hailing from Kent, England, Mike is a writer, editor and podcaster who has just finished his degree at CCCU. He also is a drummer of 11+years, plays in several bands, and is available for session work. His other interests are Batman, music which doesn't suck and pizza. Follow Mike @The_Dark_Mike
You might also like
Adventure TimebreakingGeek Pride