The Maze Runner, the latest in the string of YA book adaptations, has finally hit the screens and due to unforeseen circumstances I actually got to see it twice in just as many days. Based on James Dashner’s book of the same name, the movie, starring Dylan O’Brien, Kaya Scodelario, Thomas Brodie-Sangster, Ki Hong Lee, Will Poulter and Aml Ameen, to name a few, tries to break out of the typical mould of YA adaptations, with varying degrees of success. 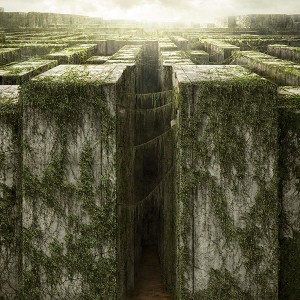 For those that have never read the book, here are some (mostly non-spoilery) things that you should know about it. Thomas (Dylan O’Brien), the hero of our story wakes up with no memory, in a cage that’s delivering food and more to a bunch of teenage boys stuck in the centre of a maze. No one remembers who they were before waking up in the very same cage that dropped them inside The Glade, no one has a clear idea of how to get out, yet most of them crave the freedom they suspect they’ll find behind the tall walls of the maze. Throw in some monsters that are feared by all and you’ve got yourself a story that gets more and more convoluted with each advancing scene.

The premise is actually quite interesting and I would recommend the book to everyone that’s interested in a suspenseful story, however some elements that work fine in print don’t translate quite well on the big screen. For those that have never touched the book (and for those that have) the movie is quite an interesting, fun experience. All actors put their best game on, the sets look fantastic, however not all is perfect since the movie does suffer due to its uneven pacing.

While you will not be spending the first hour of the film constantly checking your watch, you will still feel like they’re dragging their feet in anticipation of something big. However that something only takes places in the last twenty-thirty minutes of the film, leaving room for a lot of idle time, that unfortunately doesn’t do anything to help us connect  with the characters. It’s hard to feel bad for them if you’re mostly indifferent to their plight. The lime-light falls on a handful of characters, letting the others be used as canon fodder, which, while not uncommon, makes it difficult to care about anyone but the lucky few that get more than a throwaway line here and there.

I will say that it’s perhaps better than some of the most recent book adaptations, if only because I personally feel like some of the things that take place, at least inside the Glade – the way they create a social structure, the way they react to the dangers that surround them and the curve balls that are constantly thrown at them – are inherently human. No one is quite a hero and no one is quite a villain. Everyone is scared, angry, prone to cruelty or aggression, but they’re not cardboard figures either, being capable of self-sacrifice and kindness as well. 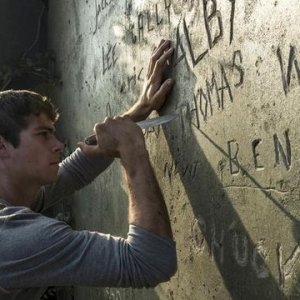 Dylan O’Brien is successful in conveying the emotions his character feels when he’s suddenly thrown inside a new world, with odd rules and even a bizarre language of its own, the slang incomprehensible by anyone outside the group of Gladers. He manages to make his character sympathetic and you can’t help but root for him, however some of the on-screen camaraderie with the others stuck in the same situation as he was, seemed forced, if only because very little attention was given to the relationships he’s established with the glades, except for Chuck (played by Blake Cooper). Perhaps more suspension of disbelief than I was willing to give was needed to accept the bonds of friendship forged over three days.

Kaya Scodelario, the only female character we see for the better part of the film is given very little too do, seeming more of a plot advancing device than a character in her own right (her role was much expanded in the book, something we didn’t quite get to see here), which is a shame, because she does have the acting chops to make Teresa a more interesting character than what we’ve seen on screen.

A special mention goes to Ki Hong Lee, who as Minho steals the show quite a lot of the time and to Will Poulter (Gally) who is believable in his role as an antagonist. Every hero needs a foil, after all.

The twists and turns of the movie, the mystery that surrounds everything is revealed at the very end, though by then it’s too late for our characters to do anything with the new informations they’ve been given. (They needed to leave something off for part two, right?) It still gave me a certain sense of closure. I suppose for those that never intend to see its sequel it can be taken as a stand alone movie, with an ambiguous ending.

All in all, it’s a decent film, highly entertaining for those that haven’t read the book, mildly frustrating for those that had, but I don’t think even they will be extremely disappointed, despite the glaring omissions and differences between book and movie. Given that The Scorch Trials (part two of the series) is already green-lit and that the movie opened up at number 1, at least in the US, I’d say this series has every chance at reaching the same success as some of its predecessors, though only time will tell if that particular prediction is correct or not.