No, I haven’t randomly decided to review a 4 year old Dr Who episode. A new Dr Who themed restaurant has opened in Beacon, New York. The Pandorica, formerly the Cup and Saucer British Restaurant, has recently relaunched hosting a cosplay launch party at the start of July. The restaurant is run by a lady from London and offers a menu full of vaguely Who themed English-y treats, including the essential fish fingers and custard. A ridiculous amount of Reddit comments were complaining that the fish fingers were actually french toast. The place is decked out in tardis blue with a frankly huge copy of Van Gogh’s Exploding Tardis on the wall. The toilet is through a Tardis door, and there will soon be a crack in time added to the décor. It looks less of a theme restaurant and more a nice homage by a fan. 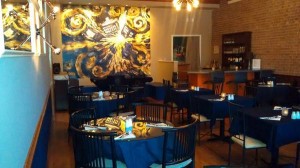 Before the change the Tea Rooms had great reviews, catered for events and hosted live music. It would be great to see this continue. They’ve already held their cosplay launch party, but could rent out for birthdays, and series premiers. Although not actually that nearby they do have some competition, in the form of The Way Station in Brooklyn, a similar themed Dr. Who restaurant/bar. As if I wouldn’t already have enough things to visit if I ever went to NY! 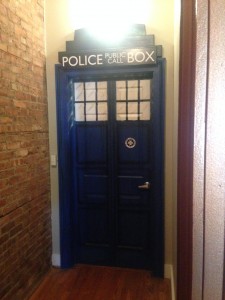 It’s potentially a legal gray area with the trademarking of the Tardis, but hopefully they will be able to keep this place going, catering to the local fans and bringing some people in from further afield.

I didn’t even know this was really a thing, I guess the British are rarely first to the fad when it comes to things like this, but seems there are a few sci-fi themed bars and restaurants out there. Is this the new sports bar? Crowded rooms full of geeks in hushed silence watching the latest episode of Agents of SHIELD on a tiny screen behind the bar. Or maybe it’ll be the new Hard Rock Cafe, finally a good home for the really bulky and ridiculous collectables we’ve acquired.

This is one I’d like to see catch on over here in the UK. In fact I’d like to see it done bigger and better, like the H. R. Giger Bar in Switzerland. If anyone gets a chance to go visit there, or any of the other places (the Lovecraft Bar in Portland looks amazing) give them reviews, get the word out there – themed geeky bars truly are the stuff of dreams. Imagine, a D&D bar with poly dice vending machines or actually ordering Romulan Ale in Ten Forward. I’ll close this with the best comment from the Reddit thread, thanks to user BigSteveK2703 “I hope they serve raxacoricofallapotatoes”.

I'm Mel, currently living in Sheffield, but originally from the other side of the Pennines. I'm a lifelong gamer, RPing from a worryingly early age, and basically raised as a geek - I don't think I ever had another option! Any spare money I have gets spent on comics, photo gear or lucha masks, and any spare time I have, when not gaming with friends, is wasted on Sims, Minecraft and trashy movies.
You might also like
Dr Whogp blognew york