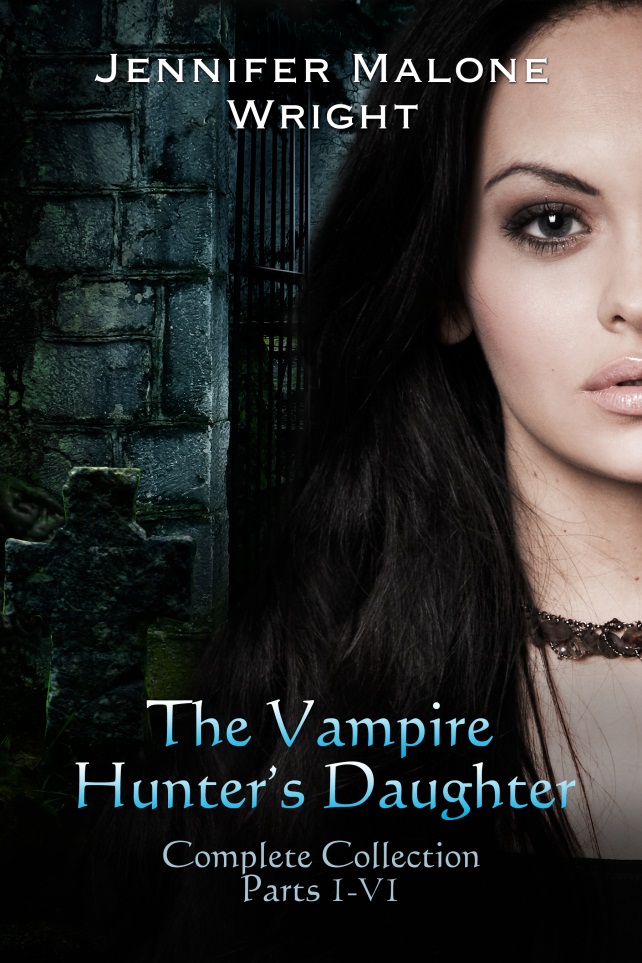 The Vampire Hunter’s Daughter is a six part collection of short stories by Jennifer Malone Wright, detailing the life and adventures of young Chloe Kalistrate, who discovers she has a supernatural legacy, the hard way.

The sheltered life of Chloe is brutally interrupted by the attack of a group of unknown people, who claim to know her mother and eventually murder her before Chloe’s eyes. From then on she ends up discovering more about her own mother, who had kept secrets upon secrets from the young girl and about her father, the mysterious vampire Trevor Kasimir.

Unlike most books that feature vampires, this particular series keeps their names more mundane than the norm for fantasy books, that is to say, I don’t recall any Boris/Vlad (names that mundane in their own right, don’t really feature much in America-based stories. Unless they’re villains. What’s up with that, America?)   But back to Chloe’s story. She learns after her mother’s demise, and a huge fight between the vampires and the vampire hunters, that she’s in fact a hybrid of the two species, born to one of the most ruthless vampires in the world and a human, with special abilities, granted by her hunter blood that can be traced back to the demi-goddess Sostrate. Sounds good and interesting so far, right?

Despite the series having an interesting subject, particularly for the avid readers of fantasy, it was at times clunky, especially in the beginning. I don’t know about you, but my first thought when someone attacks my house and has weird fangs won’t be: Oh, damn. A vampire. Guess those fangy bastards were real after all. (And no, that wasn’t an actual quote from the book).  Her accepting the situation as normal in such a short time, with few hints that it disturbed her, actually disturbed me. I wanted more of her inner process to be presented, to see how the discovery of this world affected her, but I mostly got facts about whatever situation she was finding herself in, rather than her inner turmoil. This changed in the later parts of the series as, I’m assuming, the author got a feel for her characters, adding layers to the bare bones we’ve been given in the beginning.

While the entire story could’ve fitted into a full length novel, it’s divided in six parts, each featuring more or less a certain period in the girl’s life. The discovery of who she really is and to whom she “belongs”, adjusting to a life without her mother, overcoming the grief she’d suffered after her loss & finally accepting everything. It’s more or less her emotional journey from being a little girl to actually becoming a hunter, like her mother had been before her. Some of these are actually interesting, such as the two final parts that I actually loved best of all the series, while others offer nothing new, leaving you wondering why the story exists in the first place.

If you’re a fantasy reader, you’ll recognise elements from other fantasy books such as the sheltered girl, kept away from the supernatural world, the idea of a dhampir, that also pertains to the lore of certain countries, the living donors, the town of hunters that exists solely for the purpose of eliminating the vampire threat and so on. Despite these elements fitting to the story, there are some that things that made me grow a little weary as I read them. There were already vampires, hunters and goddesses in the book, the appearance of a siren, that seemed to serve no actual purpose gave me pause, not to mention the introduction of several characters that again, seemed to be there simply as cannon fodder, until the great reveal in the last few pages that they will serve a purpose in the next instalment of the story. Nice hook, but I’m not sure it will be enough, especially with adding so many supernatural beings into the mix.

I’ve written so much and not once have I mentioned the romantic subplot. That was actually a nice touch, focusing on her adventure rather than the romance, something that most books fail at, turning everyone into love sick puppies. Chloe finds herself caught in a love triangle, more or less, between herself and two estranged brothers, Drew – who had been her best friend since she’d come to live with the hunters and Gavin – who, as I recall she only had minimal contact at first. Both relationships struck me as slightly shallow, however, given that she was fifteen and later on sixteen as the story progressed, I think it’s safe to say it falls to that, whether the author intended it that way or not. Which doesn’t mean I consider teenagers unable of deep, meaningful relationships. But most really are just shallow and punctuated by selfishness, and the romance here wasn’t exempted from that.

To wrap this up, the book isn’t something I would read twice, but that doesn’t mean it’s not an easy read. For those that love this particular type of story-telling it will be easy to breeze through the 217 pages of it, while enjoying the story, however I still felt there were things that were missing in it and, if I get the chance to read the sequel, I’m hoping they will be addressed.

If you’ve read it and you have an opinion about it, by all means, leave us a comment and tell us how you see The Vampire Hunter’s Daughter. Also, check out the promotional video made by the author herself for the book series.