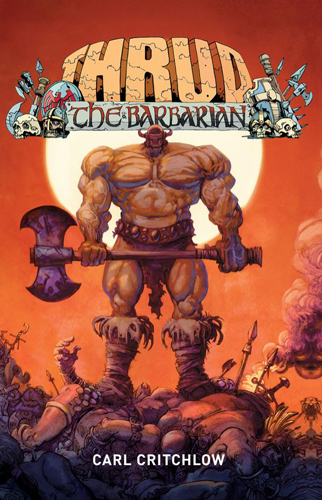 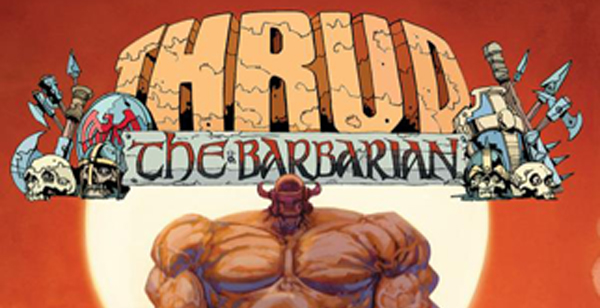 Thrud The Barbarian first appeared in a project by then student Carl Critchlow for his then tutor Bryan Talbot (himself now known as an acclaimed comic writer/artist). After early appearances in fanzine ‘Arkensword’, Thrud made his official debut in Games Workshop’s ‘White Dwarf’ magazine, in 1983. He appeared in almost 60 strips in the magazine and was twice voted most popular feature 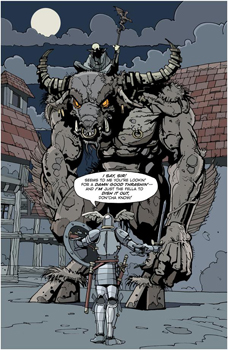 With the character’s popularity enduring over the years, Critchlow (now working on various other projects) produced his own small press comic of full length Thrud comics (which are collected here) with the first appearing in 2002. These would would go on to win an Eagle Award for ‘Favourite Small Press Title’.

Thrud is a comedic take on sword and sorcery/fantasy tropes with Thrud himself being a caricatured version of Conan the barbarian. Immensely strong with a hugely exaggerated, muscular physique and a very small head, Thrud is nigh on invulnerable and what he lacks in brains and skill as a fighter he makes up with sheer brute force and resilience.

In the several stand alone stories, Thrud faces the nefarious necromancer To-Me-Ku-Pa, searches for a long lost arcane repository of knowledge, faces off against his surprisingly named nemesis, assumes the role of king after accidentally killing the real one and ventures deep into a primeval jungle.

The most immediate thing is just how good Critchlow’s art is. Interesting characters and environments are rendered in a highly detailed style with impressive line work. This detailed approach makes various visual gags and sound effects really pop. The cartoonish ultraviolence looks great and the occasional splash pages are packed with detail.

Another thing that is genuinely surprising to the unwary reader is how funny Thrud is. Reading this in a public environment will no doubt 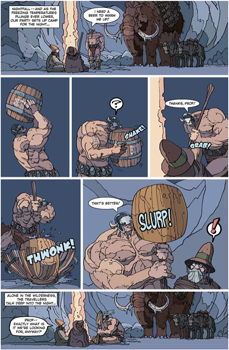 result in odd looks due to your laughter, it’s that good. Making comedic gold out of various tropes associated with fantasy and sword and sorcery storys.

Thrud despite its fantasy setting has anachronisms due to its comedic nature. He makes his first appearance here fighting in a tavern after which he casually comments ‘If there’s one thing I can’t stand, it’s a pub with no Worcester Sauce crisps!’

As well as great art, Critchlow’s writing and dialogue is full of in-jokes and nods, from elder gods, crowded taverns down to amusingly titled bands of knights: ‘Sir Percival Pursuivant and the Magnificent Seven Knights of Saint Simeon The Saintly’ and more. Older fans who can recall the characters’ earlier appearances will pick up on several nods to their pasts.

This collected edition also includes some single page strips from Valkyrie Quarterly, as well as a comparison between the older black and white and new colour versions of the ‘Blood Bowl’ strip, which featured in Citadel Journal.

Whilst Critchlow may be known for other things, like Judge Dredd and his numerous illustrations for Magic:The Gathering, Thrud remains an enduring and quirky icon to many, and this is the character in his prime.