THE ADVENTURES OF TIN TIN: THE SECRET OF THE UNICORN (I MAX 3D) – 7 GPPs 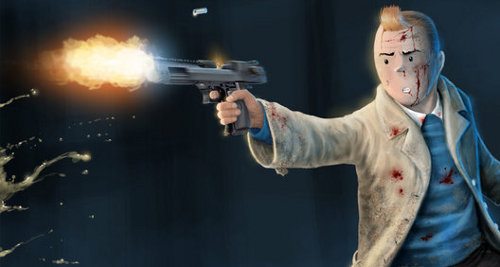 THE ADVENTURES OF TIN TIN: THE SECRET OF THE UNICORN (I MAX 3D) – 7 GPPs

These days franchise re boots could be viewed as a genre of their own and it is obvious to me why film makers love them: They take away the need to spend time creating their own characters, their own folklore; their own original storylines and all they need to do is pay someone to write up a screenplay based on something, someone else has already put effort into creating!

For obvious reasons these types of films tend to suffer from a certain level of myopia that can only come from a paint by numbers approach to writing and directing. Films like: transformers , Spiderman and the recent star trek movie have had similar problems; all of which seem to have extremely predictable story arks / plots and most seem to rely all too heavily on the nostalgia felt by an already immense fan base to fall back on ; With this in mind I hade absolutely no expectations of Tintin.

Recently there has been a spate of 3d gimmickry saturating new releases /re releases and I can only come to the conclusion that this is a bid by the cinema business to try and regain power (and its punters) from illegal download and sharing sites; an epidemic problem that is putting a lot of strain on the movie industry as whole

I myself am not a fan of 3d effects in cinema and feel that its use is a sure sign of a badly scripted, terribly plotted, mess of a movie that has hedged all its bets on tricking gullible morons like us into attend screenings by slapping a number and a letter after the title of their ‘’movie.’’ Therefore, Two hours of things seemingly coming right for me is not my idea of entertainment. In fact I could not think of anything more, nauseous, eye straining and annoying. However, for the greater good and just out of curiosity I decided to watch Tintin in the IMAX- 3D

The film itself is extremely fast paced , setting up the entire plot, direction and introducing most of the main characters within the first five minutes of this 107 minute feature. Obviously 107 minutes is not a huge number in the grand scheme of things; especially in the world of Tin Tin, with its wealth of characters and back story so certain shortcuts had to be taken in regards to the setup and execution of the plot; Steven Moffat, Edgar Wright and Joe Cornish did an extremely good job of doing this and brought this Hergé classic into the 21st century without loosing the charm and sense of adventure that came with the comic books and cartoons.

The story itself is helped along immensely by some fantastic performances, most notably from Andy Circus as Captain Haddock, who at times seems to be the only character with any expressions on his face!

The use of C.G.I is fantastically ultra realistic; whilst keeping a cartoonish feel to the images on screen. This seems to have led to an attack of the ‘’uncanny valley’’ effect where computer generated images look realistic enough to become creepy. Circuses obvious track record when It comes to motion capture filming seems to have served him well; Where as other characters can look dead on screen, Haddock always seems to push past the uncanny valley effect and always looking warm and animated .

The biggest surprise to me of the entire film was the use of 3D (I know I was shocked too); it has to be the single best use of the effect in a movie so far; shying away from the obvious irritating clichéd use and using it in order to give the film a feel and depth that is simply unprecedented. The Imax in combination with the use of 3D seems to add so much to the movie going experience; attempting to draw you even further in to the film rather than punctuate points when things get close to the screen which always wakes me out of my state of suspended disbelief .

In short Tintin has killed a lot of my preconceptions: a film made for 3D cinemas, a re boot of a franchise even just being a film that was made in the past five years , all of which would point at it being an absolute waste of time and effort, in my opinion; but I have to admit, seeing the movie and seeing how much time the director, screenwriters and producers have put into Tintin has definitely left me infatuated with 3D cinema, or at least the possibilities that lie ahead now it has been used for a more grown up and interesting effect; it may well have re ignited my love for cinema as a whole!