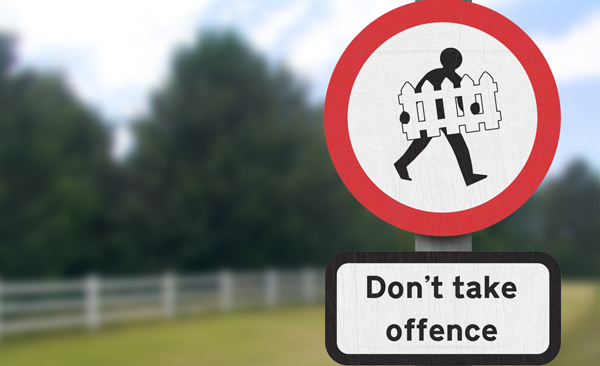 One of the things I’ve noticed recently that seems to be permeating “geek culture” is people getting offended by things. A lot. After all everybody knows nothing generates webtraffic like manufactured outrage.

The latest of these things to get offended by was a sketch that artist Frank Cho did of Spider-Gwen,  The reason this sketch was so “offensive” I hear you ask? Cho was referencing a previous cover by another artist (Milo Manara) which was itself deemed “offensive.” 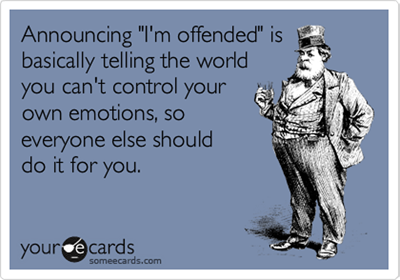 Chances are you know what I’m referring to, because if you had access to the internet then you didn’t really have much chance of avoiding it. In fact this piece was deemed so “offensive” that even mainstream press like The Guardian featured it; must have been bad right?

For anyone who’s having a “I can’t brain today I has the dumb” kind of day I’m referring to Manara’s Spider-Woman cover. A variant cover which, if not for the seemingly endless furore and opinion pieces on every website on the internet, pretty much would’ve passed the majority of people by. I’m thinking a hell of a lot of people who had no idea what Spider-Woman was or who Milo Manara  was 12 months a go do now.

But before Cho’s sketch was the latest thing that was deemed “offensive” there was Rafael Albuquerque’s cover for Batgirl which referenced Alan Moore’s seminal Batman opus The Killing Joke. This too was a variant cover which would have had far less exposure were it not for the outrage and again even made it into mainstream press coverage .

For a perspective on why Albuquerque’s Batgirl cover is amazingly powerful and crucially important rather than “offensive” then I highly recommend you read this post by blogger Dangrrr Doll which is the best thing I’ve read on the “controversial” Batgirl cover by far.

The cynic in me could say that Marvel and DC both deliberately commissioned covers that would be seen as “controversial” for the perceived audience to generate a ton of free publicity, if that’s the case then it was a brilliant piece of manipulative PR work. Ofcourse the downside is the beleaguered artists getting the flack just for creating art, which is, you know, what artists do for a living. I should note that Cho’s cover was just a sketch he did for fun and not commissioned by Marvel so the same doesn’t apply.

When Cho’s sketch was met with an angry rant from Spider-Gwen co-creator Robbie Rodriguez and a distinctly misleading article from a certain website (which I’m not going to link because they don’t deserve the webtraffic) which implies Cho said things he didn’t, rather than being shamed into a corner or responding to the million interview requests from various media types wanting to know his opinion on the “controversy” he did another sketch which sums up the problem with geek culture on the internet brilliantly. 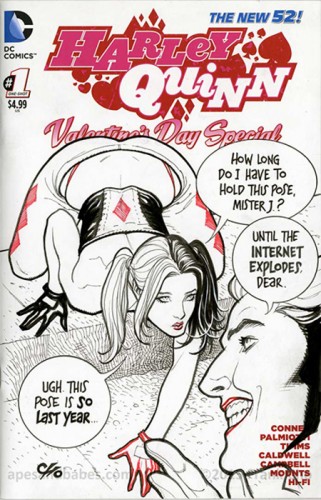 Geek culture needs to take a long hard look in the mirror if it’s ever going to get past this inane and stupid boys club versus girls club mentality. I feel like Two Tribes from Frankie Goes To Hollywood is the soundtrack for geek culture these days. Women who work in geek culture shouldn’t have to write essays on how alienated they feel from a culture they love because the idea that everyone can just get along and be a decent human being is a completely alien concept to a lot of people.

Equally men who work in geek culture shouldn’t be ostracised and demonised because they don’t fit into somebody’s idea of the new geek utopia. I wouldn’t be surprised if  Tim Berners-Lee, generally regarded as the creator of the internet, feels a bit like Oppenheimer given how so many people use the internet now.

I think I’m done with “geek culture” frankly until people learn to grow the fuck up and stop perpetuating this “trigger warning, he said, she said” bullshit and all the endless dramarama that is associated with it then I want no part of it and since everything needs a hashtag #Notmygeekculture will do, sorry it doesn’t end with gate.

Things are changing in comics and elsewhere which is great, seriously, but this change shouldn’t and doesn’t mean that artists like Cho, who has won several industry awards, have to change what they do. The idea that an artist has to “change with the times” is the most ridiculous notion ever if they already have a following but besides that another fundamentally important part of this is art is supposed to provoke a response as artist Lee Bermejo rather brilliantly put it.

The idea that you shouldn’t do something because someone somewhere might get offended is a corrosive and damaging one for people working in creative fields. Comedian Patton Oswalt brilliantly illustrated the danger of trying not to offend people via his Twitter account ,and to really realise how ludicrous this whole avoiding offending people is then you have to attach that idea to other infamous works of art, say the ceiling of the Sistine Chapel.

Now just imagine Michelangelo, one of the most infamous figures of the renaisance era, instead of painting, sculpting and just generally being an amazingly creative person spent his days ruminating on whether people might get offended by his works and just decided not to bother. Does that seem absurd, because it should.