God damn Batman is cool. In my opinion, straight up the best superhero out there. There is just so much to love about him but, for me, the root of his sheer awesomeness is the fact that he’s just a man. A man who has not only gone toe to toe with gods, psychopaths and giant crocodile men, but has won.

Batman is, in many ways, the idea of the  über man. He is at the peak of human intelligence, speed, strength and ability. While there are characters that may exceed him in one of these aspects, there is no one out there who is the whole package. Particularly, not anyone lacking superpowers. Then again, Batman has maybe the ultimate superpower. Truckloads of money. Vast wealth has given us insanely cool superheroes, most prominently in the form of mortal men Batman and Iron Man. And though you could argue this should exclude them from the super pantheon, I’d like to see some of the powered heroes doing what the regulars do. 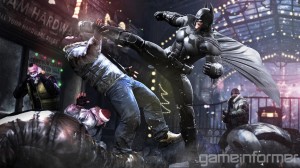 By stripping the super away from the hero, you force them to fight harder for everything. And in Arkham Origins, Batman is fighting hard indeed. 8 elite assassins. A $50 million bounty on his head. And one night to find out what’s going on and take them all down. This is Batman at his best. Back against the wall, this is a raw Batman. 2 years into your crusade against crime, and 5 years before the previous Arkham games, this is a Batman who has so far only seen the common criminality, the street toughs and mob men. Black Mask’s bounty changes all that.

Origins carries the tagline “Your enemies will define you.” Aside from sounding just plain cool, it sums up one of the primary truths of the Batman universe. Despite everything else; the gadgets, the vehicles, the city and the skills, it is the villains that truly make Batman who he is.

In Origins, you are pitted against some of the very best of Batman’s Rogues Gallery. Alongside the 8 assassins (who are an interesting mix of big names and lesser known characters) and their boss, Black Mask, there are also the classic villains to contend with in the form of Penguin, Mad Hatter and the ever lovable Joker. These psychopaths are set to ruin your night and some of these encounters are truly definitive in the shaping of Batman ( Joker is obviously foremost here). While the rest of the villains on Origins’ roster refine and advance Batman in terms of combat and his general skills, it is chilling to watch Batman’s first encounter with the clown prince of crime. 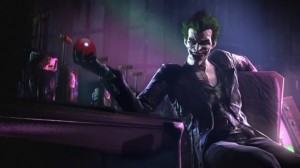 Mark Hamill is, in many ways, the definitive Joker. He’s voiced the character in masses of multimedia, most notably in the ’90s TV series and the previous Arkham games. Alongside Kevin Conroy, the first person to actually give Bruce Wayne and Batman two different voices, the pair shaped the Batman/Joker pairing to an insanely high standard.

However, with Arkham City all wrapped up, Mark Hamill announced his retirement from the role. And with Origins portraying younger versions of the characters, and Kevin Conroy currently working on a rumoured follow up to City, some new talent has been drafted in for the game.

Taking the lead role is one Roger Craig Smith. Tackling the unenviable task of stepping into Kevin Conroy’s shoes, Smith actually does a damn good job. This is a rough and raw Batman, fueled by anger. Conroy’s Batman knew who he was and what he had to do, Smith’s younger incarnation is still discovering just what it means to be the Bat. It’s the lack of imitation that makes this voice acting so good. This is not Roger Craig Smith trying to do Kevin Conroy. This is his own Batman, in the words of Alfred, “you’re not a hardened vigilante, you’re a young man with a trust fund and too much anger”. He’s angry all right, and he’s about to be pushed to the limit.

Enter Troy Baker. The man is a genius and I already love him for his work as Joel in The Last Of Us and Booker in Bioshock: Infinite. In Origins, he is chilling. Hamill’s Joker was playful, whimsical in his insanity. Baker’s Joker is scared of nothing, happy to die as long as he brings the world down along with him. Watching Batman come to terms with a man who is incorrigibly insane and utterly remorseless in his commitment to full fledged chaos and corruption is incredible. This is a Batman who has not faced the worst evils Gotham has to offer and is shocked when he encounters them.

If you’re not yet convinced of this talent however, check out this performance at New York Comic Con.

Unfortunately, I must now confess two complaints about the game. The first is one that has recurred throughout the Arkham games and is thus slightly disappointing to still see it popping up. The problem is that there are broken interactions that mean the person I need to talk to/interrogate to start a side-mission, can’t be spoken with. It’s the very same problem that prevented me from completing the Hush side mission in Arkham City and it’s annoying when you want to fully enjoy the game.

That said, it’s a problem that not everyone will experience and can often be solved simply by reloading. It’s a minor fault in gameplay that is otherwise excellent, adding some brutal new moves to the insanely cool free flow combat, a couple of tasty new gadgets and a bigger step up in boss fights than I could ever have hoped for. The issue of “charge and dodge” bosses has been well and truly dealt with. 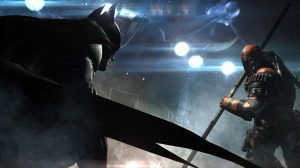 The second complaint is a more minor one. The story is a beautifully written one, dispelling any worries that could be had about the new writing team. However, while the majority of the game is excellently spun out with twists and turns constantly throwing you off the scent of just how much there is to do, the ending niggled at me. While it was a perfect end with that final encounter you’d hope for, in terms of pacing, the finale section of the game seemed to fly past. After the lengthy struggle through the first three quarters of the story, it mildly irritated me to get through the final quarter in such a flurry. These complaints, in the grand scheme of things, are minor though. Arkham Origins has achieved something few prequels do so successfully. It has delivered a comprehensive, refined version of “the before”. Paying homage to everything from Grant Morrison’s Arkham Asylum comic to Alan Moore’s The Killing Joke, the game delves into the dark heart of what makes Batman do what he does and comes up glistening.

Until you have seen Batman go up against Joker for the first time and seen the two of them realise the flip sides of the coin they occupy, how close to the brink of madness Batman teeters, you cannot fully appreciate his strength. Arkham Origins is a game that shows us not the fully fledged Bat of the previous games but Bruce Wayne in a cowl, dishing out his anger on the unrepentant scum of his city. Arkham Origins is a game that puts you in the cape and cowl. I have never felt so Batman as when engaged in full on, martial arts, ninja combat with Deathstroke, every hit and counter relying on perfect timing. Origins puts you into the richly envisioned and expanded Gotham, confronts you with a city in anguish and gives you one simple mission: You are Batman. Stop this.