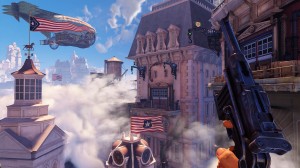 Before it’s release, we were inundated with advertisements for BioShock Infinite. TV, cinema, magazines – everywhere, and my god, it looked fit. That was it though, it was just all ‘ohmygosh what on earth is this thing of beauty!?’ with little information offered in the adverts, and nobody cared. When it was finally released towards the end of March, we really got to see what all the fuss is about.

I’ve never been a particularly big fan of the BioShock series, but with Infinite, that really didn’t matter. There is very little connection to the previous instalments besides similar gameplay and recurring themes, with an entirely different plot and new location. This might disappoint seasoned BioShockers, but in the eyes of many critics and gamers alike, Infinite far surpasses the earlier games.

Visually, it’s quite simply stunning. The graphics and aesthetics really are something. Set in a rather bizarre floating air-city that is 1912 Columbia, it’s like a surreal steampunk wet-dream.

Ideas inspired by American exceptionalism are well portrayed, and the immense colour and brightness of the city in much of the game in comparison to BioShock’s Rapture really gives this game a great setting to draw you into.

It’s not all something from a Disney palette though, as this seemingly charming city soon transforms into a violent dystopia. In BioShock Infinite, you play as Booker DeWitt, a former Pinkerton agent who has been sent to Columbia to find a young girl. DeWitt finds the girl, Elizabeth, who has been held captive for most of her life. However, the caught in the crossfire between the city’s two warring sides; the nativists striving to keep the city pure and rebels, the Vox Populi. DeWitt and Elizabeth are pursued by both throughout the game by both groups.

With Elizabeth central to the conflict in Columbia, the combat element is rather constant. As Booker, you use a combination of weapons and ‘vigors’, along with Elizabeth’s power to create dimensional tears. The weapons mainly consist of a vast array of guns, along with Booker’s Sky-Hook which is rather useful as the game’s melee weapon. The amount of ammunition varies a great deal with the guns, and you are only able to carry two weapons at any one time. However, ammo is very easy to stumble across by looting corpses, scavenging or purchasing it and guns are also easily found. 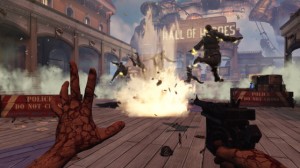 Return to Sender in action

Similar to plasmids in earlier games, Booker’s ‘vigors’ give him abilities which are powered by ‘salts’ which like ammo, are also readily available in the game. There are seven in total, ranging from ‘Possession’ which allows Booker to control machines to things like ‘Bucking Bronco’ which throws your target into the air, momentarily levitating them and rendering them helpless. My personal favourite, ‘Return to Sender’, which whilst charged allows you to absorb your enemies bullets and fire them back.

Vigors are gradually unlocked throughout the game and are great fun, making for some interesting combat sequences, providing you don’t forgot to top up your salts. Elizabeth has her uses as well during a fight, opening dimensional tears which can give you access to cover, ammo and health amongst other things. She’ll also occasionally toss you a health kit, ammo or salts if you’re in need during battle, although it does get on my nerves when she randomly tosses you coins all the time. It’s also a big bonus that you don’t have to protect Elizabeth, who fends for herself.

Another fun element of BioShock Infinite is the use of the city’s rollercoaster-like transportation system, the Sky-Lines. Booker uses his Sky-Hook to jump onto the system and travel throughout the city. It’s a bit mental and does send you a little dizzy, but it’s a fun system. I personally love the utilization of the Sky-Hook as the game’s only melee weapon, it’s particularly fun when finishing-off an enemy. I want one. Only £50 for a replica in Game at the moment. Did I mention that my Birthday’s coming up? 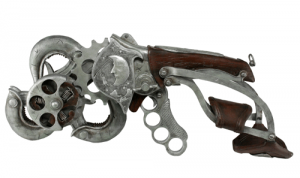 As well as the warring factions in Columbia that you come into combat with, there are some really interesting and sometimes mechanically powered enemies. There’s the beast that is the Handyman, a human bonded with a mechanical suit, the ghostly Siren and Motorized Patriots amongst many others. 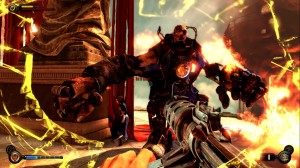 Besides it’s beautiful graphics, awesome quirkiness and fun and constant combat sequences, BioShock Infinite really does have a solid narrative. Themes of racial segregation, nationalism and xenophobia also make for some interesting ideas. Sometimes people underestimate how difficult it can be to put together a really good story for a game, and it’s so often lost behind the action or graphics. Recent games I’ve played have lost me on the lack of a good plot. Tomb Raider‘s was a little weak in my eyes, and don’t get me started on Assassin’s Creed III. After all, when games are so cinematic these days, surely a good narrative is just as important as it looking pretty. 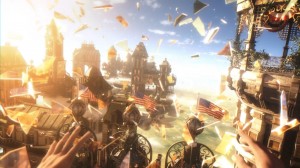 In that sense, this game does not disappoint. The story is actually interesting and gets your attention, especially as you get deeper into the game. You’re interested in the characters, the back story of Columbia and how it came to be that way. Why Booker’s there and what makes Elizabeth so darn special.

I absolutely adored BioShock Infinite, and I’ve not been so absorbed in a game since Skyrim back in 2011. Even then, I don’t think anything has had be so gripped as this one. I loved the pace, the narrative and it really is visually stunning. It completely stands alone as it’s own game, stepping aside from the BioShock series, and that’s not a bad thing. In my eyes, BioShock Infinite really is the game of the year, if not the past couple of years, and it’s not surprising how much success it has enjoyed so far. In reviewing it, I’ve come to realise that I can’t seem to fault it. Seriously guys, grab a copy if you haven’t already because this really is one that you won’t want to miss.