previous
OFF
random
next
Starbound: To Infinity And Beyond
Video Games & Tech
0 likes

Uninspiring plot, a little too familiar for Final Fantasy fans.

Everything I heard about Bravely Default: Flying Fairy before it was released was good: that this was a genre changer, but that it also hearkened back to the old school Final Fantasy games, that people who grew up on the Square Enix games of the past would love it.

Mostly, they are right.

Available on the 2/3DS only, Bravely Default: Flying Fairy is, at its heart, a typical turn-based JRPG. You have four characters who can select from a list of jobs, each with different skills, abilities, spells, and weapons of choice. Using these, you fight random battles or bosses to clear dungeons and progress through the story. 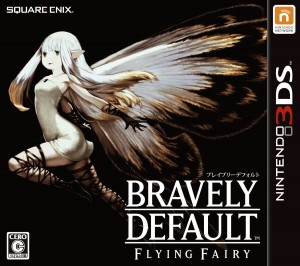 So far, so typical. How Bravely Default differs is in its combat system, and in the incredible range of touches added to the typical formula.

As well as acting each turn, you can choose to either ‘Brave’ or ‘Default’: Braving allows one to take up to four turns at once, whilst Defaulting allows you to defend yourself as you relinquish your turn to use later. This is done in the guise of Brave Points. You can store up, or expend a maximum of three additional Brave Points each turn. This allows for interesting tactical decisions, for enemies to be rushed all at once, with the risk that the opponents will have three turns to deal damage to you unimpeded. And the monsters and bosses can Brave and Default just as you can!

There are also Special Moves granted on the basis of the weapon you wield, which you unlock by delivering certain kinds of attacks: Bows unlock their special moves by delivering attacks which the enemies are weak against, for example. You can also customize these Special Moves, making them deal status effects, elemental damage, and provide certain bonuses to you and your allies.

Another new element of ‘gameplay,’ though it’s hard to tag is as such, is the sub-plot of rebuilding Norende, a town destroyed at the opening of the game. You use villagers to perform tasks, which take hours to finish, but you can use multiple villagers to do a task quicker: five villagers take one fifth of the time, for example. Doing these tasks grants you free items at random, as well as giving you access to special and powerful armour and weapons. It also grants you the parts you need to modify your Special Moves, and the components which the Salve Maker class can use to devastating effect.

There are a number of other interesting little touches: you can turn off random encounters, or even double their rate, and you can switch off XP, Job Point, and cash accrual from fights as well. One can also earn bonus XP, JP, and PG by achieving certain criteria, like winning in one turn, or winning without taking damage. This keeps the grinding fresh, and the customization also allows you to just avoid annoying fights or blast through a dungeon. 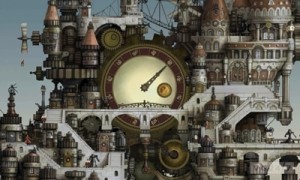 In fact, this whole review could be called, ‘Another Interesting Feature.’ You can connect, via Streetpass or, once per day, online, to add Friends to your game. Adding friends not only increases the rate at which you can improve Norende, but also lets you summon their characters in fights. And, the more you summon a person, the better connected you are with them, which ultimately allows one of your characters to access their abilities, should you not have access to them currently.

However, it is not all sunshine and lollipops for this review: the plot is the source of many of my gripes. Continuing with Square Enix’s never-ending obsession with crystals, particularly with four elemental crystals which manage the world, which are then threatened by an overarching villain. This lack of imagination continues through the main plot, with most points either predictable or uninspired. Uninspired is the best word for it, with elements often introduced because they were needed, not because they were interesting. 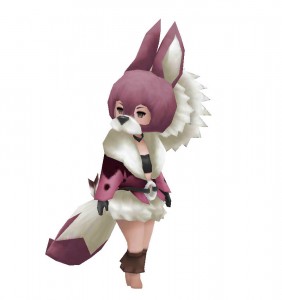 Being a Hunter ruins every cut scene. EVERY SINGLE ONE.

Most of the best writing comes in the optional sub-plots, with some very interesting ideas explored, such as the effects of commercialisation, war crimes, and seriously creepy date rape (yes, really). Beyond that, there is little which will make you desperately want to proceed, or make you hate any villain but Victoria.

The Jobs are all really unimaginative as well. They follow the somewhat-boring Final Fantasy Tactics lot, with Ninjas, Black Mages, Summoners, and so on. How you get new Jobs is at least new, with you having to defeat their current owners in order to attain them, but that’s about all that’s new in here. But those are niggles: the Jobs feel familiar because they are, allowing a seasoned player to settle in and plan their crew easily. At least there are new Summons available, and the way which you get them (no spoilers here) is unique.

Bravely Default is the classic JRPG filtered through a modern sensibility, with Farmville-esque town management, social elements, and complete customization of your experience. It is well worth playing, despite the faults in the main plot, and some elements being unimaginative, as it is an interesting and addictive game.