The general opinion of the Call of Duty franchise waned somewhat in the wake of CoD: Ghosts, what with a mediocre campaign and a fairly terrible multiplayer experience by all accounts. Call of Duty: Advanced Warfare hopes to restore our faith in the series… but have Activision and Sledgehammer managed it?

The general reveal trailer for the game piqued my interest earlier this year, what with the Elysium-esque Exo suits, and the Titanfall/Destiny-ish gameplay. So I wondered what the multiplayer might turn out like; if it would return to the days of Unreal Tournament-style pyrotechnics, or if it would have a more sophisticated feel to it. Today we finally got a proper taste of the impending multiplayer experience… and it tasted damn good.

At 6pm (GMT) today, Activision and Sledgehammer revealed the fruits of their labours. Labours that have taken 3 years to come to light, and have a lot to live up to after the debacle of Ghosts. I watched the event live, and tweeted along with the Geek Pride account (apologies for you followers that don’t give a crap… thankfully it only lasted 45 minutes), hoping that they didn’t cock it up.

Apparently Advanced Warfare has been 3 years in the making… let’s hope they don’t disappoint! #advancedwarfaremp

I’m happy to say, that my skepticism appears to be unfounded at the moment (I’ll reserve judgement until I get to play it at Eurogamer in September), and from the off I was getting excited about a lot of what I was seeing.

Yes geeks! You read correctly – Lasers! The weaponry has taken a leap forward from Ghosts, and we finally feel like we’re in the future. Laser particle weapons and rail guns, Predator-style cloaking abilities and some epic looking scorestreaks were showcased in the brief initial video we saw, and I had a little grin on my face.

The Exo suits look cool, and some of the maneuvers possible it’s going to make gameplay fun, fast and potentially pretty hard. The Exo is the focal point of the game, and if this wasn’t apparent enough, every multiplayer map has been built around this very mechanic. Because of this, the Exo suits were the first aspect of the game that Sledgehammer decided to talk about.

Exo suits come with their own set of abilities and perks, these include things like boost strength and speed, boost jumping, boost sliding, and an air-to-ground melee attack were all detailed. These will provide an added dimension to the gameplay we hadn’t seen before. Looking at some of the footage it definitely had a bit of a Titanfall/Destiny feel to it, and as my colleague Nick said on Facebook, it’s almost like Sledgehammer are giving the finger to those former colleagues that left to work on Titanfall. Although Titanfall came to mind, it definitely looks like it’s taken inspiration, and then amped-up the intensity. 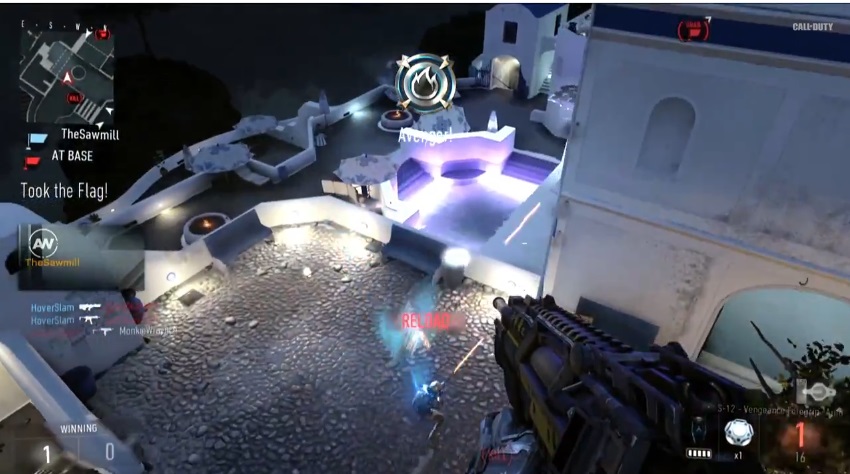 The mid-air combat is hectic

One of the big aspects of Black Ops 2 was the Pick 10 system. Well Advanced Warfare has the Pick 13 system, making way to incorporate the perks and abilities for the Exo suits. Not only that, but now scorestreaks are completely customisable too. I’ll use the example given in the presentation to explain this:

If you have the turret scorestreak, you can alter it so that instead of using .50cal rounds, it fires rockets. You can also customise it so you can remove the gun from the turret and use it as your primary weapon (although this costs a lot of points).

In fact, customisation in general is a big aspect to Advanced Warfare. You can now pick up buffed weapons from supply drops, much like getting an epic loot drop in World of Warcraft. The same can be said of items your soldier can wear. This opens up a whole new world of loadout options to go alongside the Exo perks and abilities, and customisable scorestreaks. I can see now why they increased it from 10 to 13. 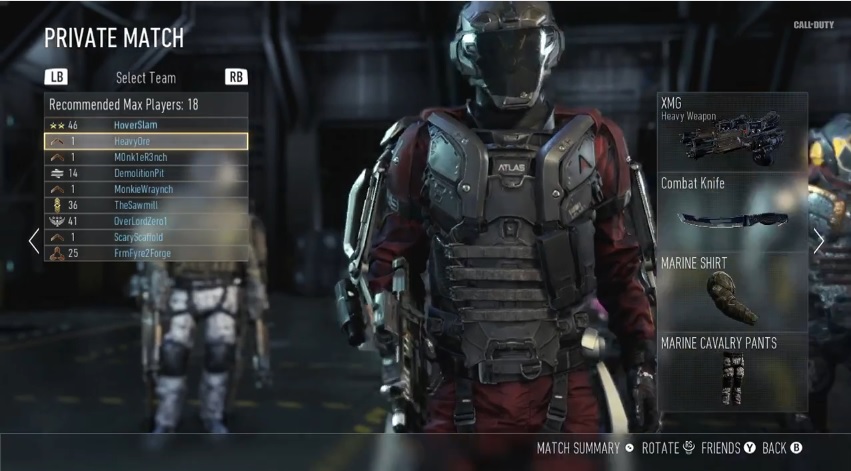 Going alongside all the customisation options, the game lobby has been given a massive overhaul, now forming the “Virtual Lobby”. Here you can cycle through soldiers (not just their names, the actual people), and view their stats, awards and even their loadouts. You can also practice between multiplayer rounds at the touch of a button, so now you can test out the new weapon you’ve just selected before you start your match.

When it came to the multiplayer maps, there were some interesting offerings. Biolab is a great-looking close-quarters map with some fun-looking vertical aspects to it. There’s also canisters of biohazard material you can blow up to gas your opponents. Riot takes place in a bombed-out prison in Baghdad, and you can take advantage of the holes blown in buildings, and the still working laser tracking system. Ascend is based inside a space tower of some sort, and in all fairness it looked the least interesting to me. It has apparently 3 routes you can take, and players battle over a beastly-looking automated gun turret. Finally Defender is the map we’ve seen the most of, which has a dynamic tsunami event. This one looks pretty great, with lots of open spaces and big jumps.

When it comes to game modes, I’m very happy. One of my favourite modes from Black Ops 2 makes a return – Hardpoint! Along with the old favourite, a new mode was mentioned called “Uplink”. This involves combatants fighting over control over a satellite system, and sounds like a lot of fun.

As the multiplayer reveal wrapped up, we were all informed that E-Sports will be well catered for, so all of you hardcore and pro players can rest easy knowing that for the forthcoming year your Twitch streams will be sorted! No word on if there was any incorporated support for Twitch or YouTube streaming though. 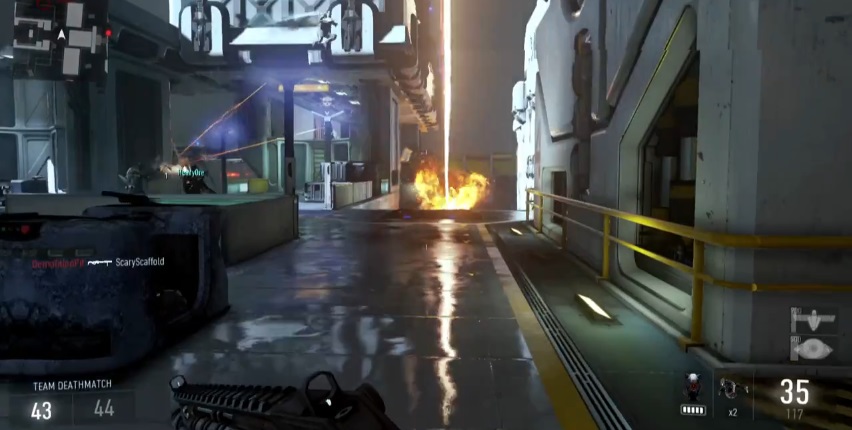 The satellite in the Uplink game mode looks like a beast!

The final announcement came in the form of a preorder perk. For anyone that preorders the game (no matter which version), you get what’s been dubbed “Day Zero” access. This prettymuch means you the game a day early, and not only that, the first early 24 hours are double XP time. On top of this you’ll get access to 2 bonus weapons.

So what do you think? Has your faith been restored in the Call of Duty franchise? Or was Ghosts so bad that you won’t go back? Let us know by commenting!

You can check out the Multiplayer Reveal Trailer here: