previous
100 Million Minecrafters
random
next
Indie puzzle platformer Teslagrad is coming to PS3, Wii U and Vita this Summer
Video Games & Tech
1 like

As a kid, gaming on my 48k Sinclair ZX Spectrum in the 80s, there were many games I thoroughly enjoyed. Some of those games have turned into gaming classics but many have simply faded into the mists of time (and the fog of my memory). There are a few precious gems from back then that inspired awe though, games that for one reason or another enthralled me.

One of the titles that had me coming back again and again was called Chaos: the Battle of Wizards. It was a turn-based, multi-player, strategy game, pitting 2-8 players (human or computer controlled) against each other. As you’d imagine, it was all magic based and, given a limited resource of spells that you could cast on a target or summon creatures to aid you.

Julian Gollop was the designer behind the masterpiece and the same guy that brought us the original UFO and X-COM games. He has announced that he’s bringing the old classic up to date with a fresh new version called Chaos Reborn, taking the premise of the original and revamping it from the ground up.

The developers currently have a playable prototype and the game will be brought to Kickstarter on 14th March 2014. 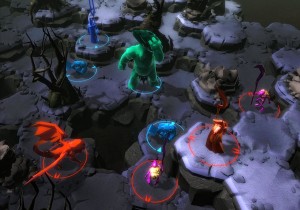