I am an enormous Soulsbourne fan, having completed each game multiple times and having done SL1 runs of the Dark Souls games (I’m not yet hardcore enough to do an SL1 Demon’s Souls run, and will complete my BL4 Bloodborne run eventually). These games, spearheaded by renowned games designer Hidetaki Miyazaki, are special in a way many games could never hope to be, and they’re harder than a concrete hammer so they grow on you like the world’s best virulent ailment.

Which I why I was happy to get some time on the Play Expo’s Dark Souls 3 machines on Saturday and Sunday, playing through 3 of the 4 available classes and working my way through the playable demo. Here, then, are some of my initial thoughts based on my 40 minutes of gameplay. 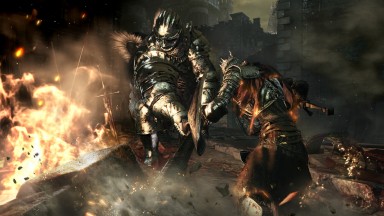 I’ve seen the art style for DS3 labelled as ‘Dark Souls put through a Bloodborne filter’, and that definitely shows. The world is a little more ragged and jagged than Dark Souls 1 or 2, with more texture and details even on the basic enemies. Everything has been upgraded significantly for the new generation, and the animations are just as smooth and well-crafted as expected from a major AAA release.

One little touch I liked was how one’s Estus flask becomes progressively duller as you drink from it, providing a visual reminder of your luck and lifeline running low that works much better than a lower number. It shows an incredible attention to detail, and makes me excited to see how other standard items look as they’re used. 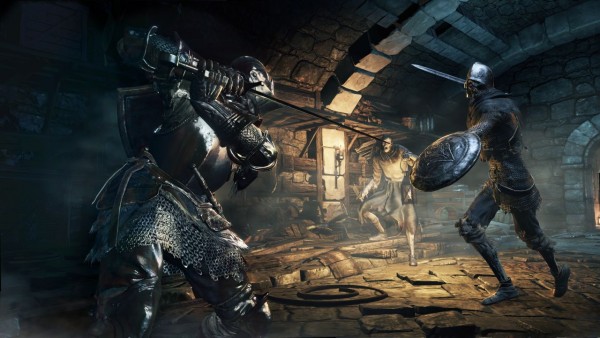 I got to play with a Broadsword, a Spear, an Axe, a Greatsword and the Scimitars, as well as using some magic and the parry shield on the Academy Assassin class. The Spear has a bit of a wind up, as a real spear would, which requires a lot more learning than I had time for, and the parry shield has a tight window along the same lines as Dark Souls 2. This, and only limited shields being able to parry, makes for a different experience where parrying is not the default tactic, another positive step forward.

The Broadsword and Axe handled very well, moves chaining together in a realistic way, and the Scimitars were quite flashy. One thing I found was that the poise damage – the extent to which an enemy is knocked back or staggered – is much less than in previous games. Only the Greatsword really stopped an enemy mid-tracks, and then only standard-sized enemies.

Unlike in Bloodborne, blocking is key. There are some overhead smashes that ignore shields, meaning playing like a cautious turtle cannot be the default setting, but it was nice to see the shield be so important. The parry shield understandably didn’t negate all damage, and blocking took more stamina, but it was still vital to surviving the game’s enemies.

Magic was standard. I wish I had more to say, but it did what’s expected of it. Perhaps a little slow, which might be meant to balance it as a tactic in PvE and PvP or might be a sign of a low level character. One would hope the former. 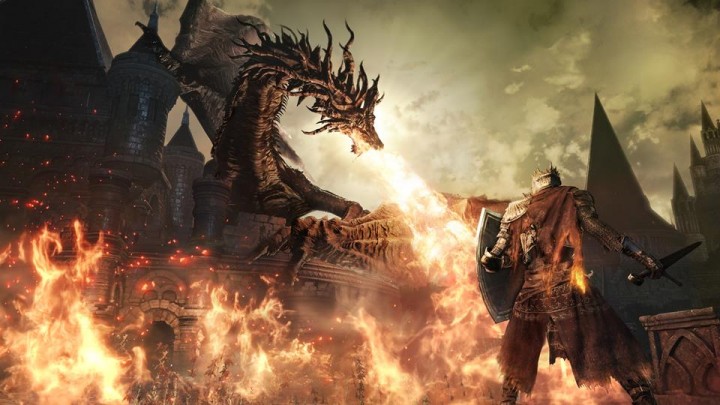 The thing I most though whilst playing through the game, rolling and back-stepping, back-stabbing and guard-breaking, was how alike the game is to Demon’s Souls. The atmosphere in the demo was very 1-1, and the animations and quickness of the rolling reminded me of the true Alpha of the Soulsbourne games. There’s even a Red Eye Knight guarding something important! Dark Souls 3 seems like the game Miyazaki would have wanted to make right at the outset, at least from the slender slice I got to play.

An improved Demon’s Souls though, with back-stabs a little more difficult to pull off than in Demon’s Souls and Dark Souls 1, but still important tools. Their window is narrow, and some enemies know how to counter fishing for the back-stabs. And, as I mentioned, parrying is harder too, requiring a broader range of tactics from players. Also, the noise you when you successfully land a critical blow is like God him/herself slamming the weapon into your enemy, bloody thunder.

Aside from that, there is much of the intricate level design fans have come to expect, with dead ends and routes that double back on each other, shortcuts to unlock and traps laid carefully for unsuspecting players. And those damned Hollows with the firebombs are back, ready to wreck your day.