It isn’t all that unusual these days for a game to receive a mixed response but what is unusual is to find one that divides opinion as much as Deadly Premonition did when it was originally released as an Xbox 360 exclusive in the West three years ago.

While most reviewers at the time agreed that the game looked and played like utter shit, there was just something different about the story and original design that kept people hooked. A huge cult following was immediately born and after years of pleading for an official PS3 release in America and Europe, a Director’s Cut was eventually released on the console earlier this year with improved controls and visuals compared with the original version. 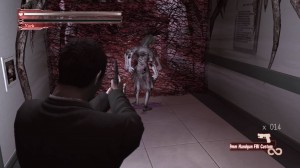 Deadly Premonition’s combat is so clunky and simplistic that any attempts at suspense fall flat.

At the same time as the PS3 release, developers Rising Star also took to Greenlight to appeal for support for a Windows version from the PC community. Naturally, Steam jumped on this and masses pledged their allegiance before waiting patiently for their chance to play one of the most controversial video games of the last decade on a well scheduled Halloween 2013 release date.

It’s perhaps unfortunate then that the final delivered product has turned to be one that not only disappoints but that actually manages to make a total mockery of the Greenlight system.

For the uninitiated, Deadly Premonition begins with FBI Special Agent Francis York Morgan en route to the quiet country backwater of Greenvale to investigate a homicide that bears a stark resemblance to an ongoing Federal serial murder investigation. After meeting some of the town’s more bizarre residents, Morgan leads the local police force in their efforts to bring the killer to justice, only to discover a complex web of murder spanning decades and the key to unlock secrets of his own past.

The game’s story is often compared with Twin Peaks and this has always been it’s most alluring feature. The bland textures and rigid animation are reminiscent of an early PS2 game and single handedly destroy any chances that the game ever has of creating believable horror or suspense. Likewise, the voice acting and dialogue are far more Barry Burton than Bioshock and it’s pretty much impossible to do anything when watching the cut scenes other than shake your head and laugh.

Controlling the game isn’t a particularly pleasant experience either and ranges from feeling slightly retro to like an all-out nightmare. Deadly Premonition has possibly the worst  map of any game that you will ever play and the York’s movement feels clunky and awkward, especially during combat. Where Deadly Premonition does shine however is in it’s original design concepts; Morgan needs food and sleep in order to function and players are encouraged to change clothes and shave if they want to remain popular with the locals of Greenvale. The original soundtrack is also one of the best of the last few years and does far more to emphasise the unique style and kookiness than the visuals ever could. 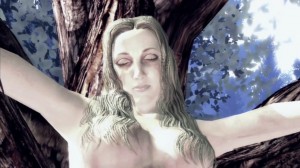 The game’s adult story and quirky Twin Peaks vibe are easily the highlight.

Of course, all of these problems are to be expected from any port of Deadly Premonition and are generally accepted as part of it’s charm.  When Rising Star promised to bring the game to Windows they didn’t make any claims about fixing it since that would no doubt result in a very different experience.

Over time, the fan base had become used to the little quirks like ridiculously overpriced vending machines, wooden characters and a map that not even an orienteering expert would be able to understand.

What nobody could have anticipated however is that Rising Star would managed to break the game even further.

As a starting point, the PC version of the game is locked to 720p resolution and 30 frames per second on any machine regardless of specification or monitor. Community modders responsible for fixing similar problems with the PC port of Dark Souls last year were quick on the case and managed to patch these problems within 12 hours of release but that raises the question of why the official development team obviously couldn’t be bothered. Since the Steam page for the title was launched it has also promised controller support but unfortunately this is a bare arsed lie and in fact the game showed unplayable glitches when a controller was even connected during our review playthrough. 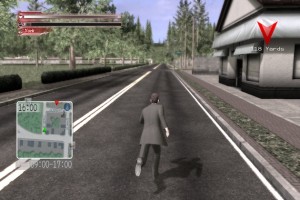 The sparse world of Greenvale and real-time clock system often leave you with long periods of nothing to do but look at the particularly uninspiring scenery.

The result is that you end up playing a game that was originally designed for the Xbox 360 controller using a mouse and keyboard as the 360 controller support has basically been removed. This wouldn’t be so painful if there weren’t so many bugs but in fact I had to play the same sections of the game several times over due to crashes caused by accidentally moving the mouse at the wrong time during driving. The game froze whenever it was minimized to the task bar and certain enemies would glitch whenever they were on screen.

Shoddy ports are something that PC players have become used to in an age when most publishers see Windows as a secondary platform however there seems to be something particularly shady about this release. A title like this was never going to fail Greenlight leaving the cynic in me to wonder if taking the more indie approach to publication was likely just a marketing exercise to secure as many pre-orders as possible. Lead Director Swery65 (Hidetaka Suehiro) has since publicly apologised for the standard of this port and has vowed to patch at least some of the many problems but for those who pre-ordered that is definitely just too little, too late.

At £19.99/$24.99, Deadly Premonition: The Director’s Cut isn’t exactly cheap by today’s PC standards either which sadly leaves me with absolutely no reason to recommend this to anyone. If you played and loved one of the console versions then you’re probably going to be soured by the piss-poor quality of the port and anybody looking to experience the game for the first time will likely find far more enjoyment in the PS3 version.

By all means drink the coffee if you really want to but this is probably one that is better just left on the shelf.