previous
WearCam, the future of action cameras?
random
next
Eight games to watch out for from EGX2016
Video Games & Tech
0 likes

An excellent atmosphere and a spacious show floor made for a great event.

When signs are stating "2 hours from this point", you know there is a problem...

EGX was another epic event, and well worth attending for anyone with even a passing interest in games.

Just when you think that EGX cannot possibly become any bigger, it proves you wrong.  Whilst there were not any TIE-fighters from Star Wars like last year (instead we had a Lego version of Kylo Ren), we did have huge stands dominated by colossal images of robot dinosaurs (courtesy of Horizon: Zero Dawn).  EGX certainly felt bigger.

EGX, formerly known as Eurogamer, is the UK’s largest gaming convention, held every year in the Birmingham NEC.  Despite the focus being on video games, there was still a significant board game element presence, a sign of the interest in tabletop games that continues to escalate.

To say that EGX was packed was an understatement, as people were filling a hall just to enter EGX.  Nonetheless, despite the numbers of people – approximately 75,000 – it never felt claustrophobic and the atmosphere was always welcoming.

Final Fantasy XV, Dishonored 2, Horizon: Zero Dawn, Destiny and The Last Guardian were understandably the big names there, but there were also huge stands for Rise of the Tomb Raider (including a talk by senior community manager Meagan Marie) and Dawn of War III.

Queuing is to be expected at all conventions, and it was at these larger stands where the queues were the worst.  When there are signs stating to expect a two hour wait from this point, you know there is problem, and perhaps you can be doing something more fun with your time.

However, where innovation within video games lay (as well as the shorter queues) was in the Indie and Leftfield collections, where smaller companies are able to experiment more with their games and try something truly original.

In an effort to make EGX more family friendly, the organisers moved the more mature games (Battlefield 1, Gears of War 4, Outlast II, etc) behind 18-only screens.  The indie developers also checked with parents that their children were okay to play their games.

There was a lot to take in at EGX, and in many ways a single day visit was not enough.  However, even if you were to spend two days, you would be unable to see everything, due to the number of talks and events taking place, such as the Destiny talk which saw a huge crowd gathered at the stand.

Cosplayers, as always, where there, but it seemed as if there were less than in previous years, although the standard was nonetheless impressive.  It was also great to see game developers attending EGX in costume to help promote their games, as this further added to the atmosphere.

For the more serious attendee who is actively interested in pursuing a career in the video game industry, there were the industry stands, the majority of which were from universities offering degrees in game development, but there were also stands from Creative Assembly and National Crime Agency. 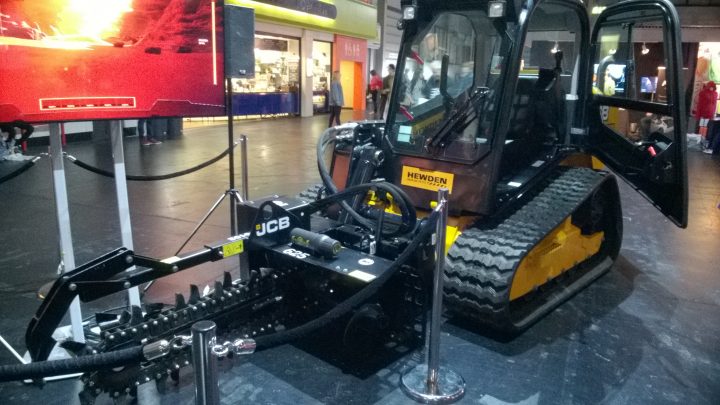 My other car is a JCB…