Hard to get into as a beginner

Some functionality seems to be "just there"

If you love 4X games, you'll adore this. The graphics are lush, and the lore is deep. Dive in!

I entered into Endless Space 2 to with a very wrong idea as to what it actually was. After seeing the trailers, I made the assumption that it was some sort of MMO, like what the kids like. The trailer contained folks from alien races doing very dramatic things as part of a story I had literally no prior knowledge of, with music and shot choices that would let me know some very important stuff was happening indeed.

You can imagine my shock once I logged into the game and seemed to be stuck in the inventory screen. Where was everyone else? Why couldn’t I customize my avatar past picking a race? Where was the pressure to join guilds that would eventually leave me to hate the very concept of anything that isn’t single player gameplay?

Once over my initial shock, I quickly grew invested in the “theater of the mind” style rpg quests and rapidly grew to understand the 4X genre that had previously been completely unknown to me. As you expand your empire you can unlock various, race-specific skill trees and adapt your empire to suit your play style.

Speaking of trees, it is my understanding that the latest race, The Forsaken, are a welcome addition to the usual roster of Humans and Humanoid-looking folks. I personally find them pretty darn kick-ass, great big Ent-Looking mo’fs that they are. The races themselves have a wonderful array of specific skills that allow you to play the game in whatever manner you deem to be the best. There are endless (ha) methods of solving the problems you are faced with, but I personally found the best way was a dash of the old violence. I mean, there is a whole host of political intrigue and nuance, but I’m far too stupid for that, ergo the “hitting things” approach. In addition to the above, Each race has its own unique soundtracks, and a cool “we’ve arrived on this planet” cutscene, which adds a personal touch to what can be very often inventory screen tennis.

The galactic map itself is a thing to behold: Each planet looks and feels like an individual biosphere in which myriad lifeforms could potentially cohabitate. The graphics are gorgeous, and give life to the game in a way I’m lead to believe most other 4X games don’t.

Going back to the fights: If you manage to piss someone off enough you can enter into a battle and these are some of the best-looking space battles I have seen. With a camera you can freely wield you can pick the best angles manually for the most pants-tighteningly bodacious shot. I know it’s not a genre staple, however, I was disappointed that I couldn’t get in on the action myself by controlling a ship a’ la most RTS affairs. 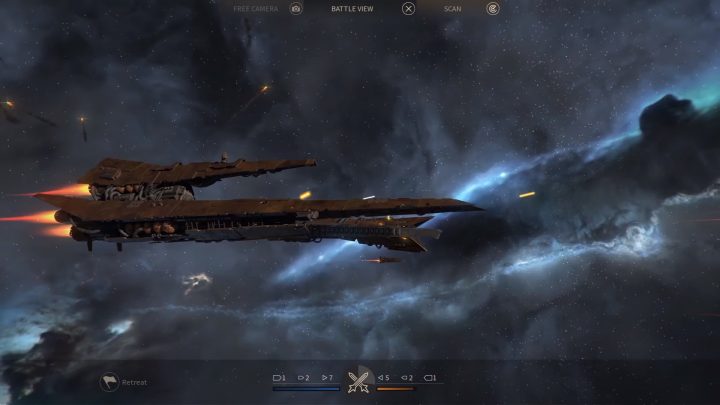 As a complete beginner, this game had a very high initial learning curve, but you’ll learn pretty soon to live by the prompts. The tutorial is extreme granular in its detail, which may be off-putting to some but gave me a comprehensive understanding of the universe I’d leapt into with both feet.

This is a game that demands your respect and time. And if you give it that, the rewards are rich.