previous
Alien Isolation Hands-on: At last the bitch might finally be back
random
next
Shortbreak Studios and Techland reveal Hellraid: The Escape for iPad and iPhone
Video Games & Tech
0 likes

Great Aesthetic,
Explosions,
Interesting and varied use of a single mechanic,
EXPLOSIONS!,
Awesome Soundtrack,
Did I mention explosions?

Despite suffering from an identity crisis, the game is cracking fun, with only minor physics bugs and repetition to mar the experience.

Worry not unexploded brethren! Explodemon sizzles with force of massive burning heartache! Ahem, Explodemon is the latest game from Curve Studios, the makers of the mournful Thomas Was Alone and the wonderfully anarchic Stealth Bastard (I promise you, that’s its actual name). The game features the hot blooded and terribly translated last guardian of Nibia as he tries to save life, love, and galactic civilizations through the power of explosions.

I’m not making a word of this up, I promise you. This game is intended to be a homage to the 16-Bit golden age of platform adventures, though the word “homage” should be used under advisement. The limits to this homage seem to be the fact that it’s a side-scrolling platform game, which is a bit disingenuous, where you play a titular chemically and grammatically unstable guardian through twelve levels of frenetic exploding action spanning across four worlds. 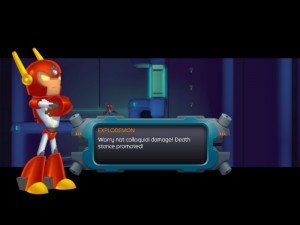 My Philosophy Is Too Explosive To Be Nihilist!

Graphically, the game looks rather good. It is technically 2.5D like a lot of modern platformers but at least aesthetically the developers have tried to keep the game to its 16 bit roots. The graphics are bright, the effects simple and the character designs very much reminiscent of the Megaman X games in particular, something that is helped by the gloriously nonsensical cutscenes that take place between each of the four worlds.

The story could easioly fit on a postage stamp, but the way it is told is unduly glorious. In fact, primarily by virtue of the nonsense that comes out of Explodemon’s mouth every time he is on screen, I suspect the next round of forced memes could well emerge from this.

The music is equally superb, hitting that same level of catchy chip-tune inspired electronica as a lot of throwback games, but injecting it with the same grandiose notes as the rest of the game. The music can get repetitive though, particularly since there is only one track per set of four levels and the levels can last for up to half an hour each depending on how much of a pathological collector you are.

Sadly, whilst the graphics represent a modern take on classic gaming, the gameplay doesn’t really match. The interface is delightfully retro, as is the fixed perspective, and certain elements of the level design, but really all those elements are window dressing a fairly basic puzzle-platformer with some modern design elements.

This means a lot of checkpoints, room-based progression focused typically on a single set of puzzles, and a peculiar emphasis on physics. In terms of design ethos, it borrows far more from ‘Splosion Man than the platform games of the 90’s. That’s not always necessarily a bad thing since Stealth Bastard after all was a room-based platformer too and that game was awesome. The key problem here is that the game lacks focus.

The game features a mix of room-based puzzles and explosion based combat coupled with mild exploration that usually takes the form of more optional puzzles. All three of these elements are fairly cool uses of a single mechanic, that being that you can explode. You can use it to jump, dash forward and of course attack seemingly bomb-proof enemies, limited of course by a meter that takes time to charge. The problems with all three are subtle but together do come to mar what is otherwise an excellent experience. 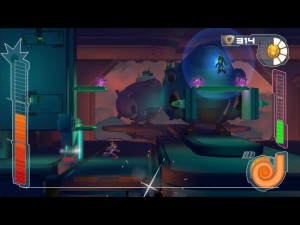 The combat is based on awesome ideas as well as an interesting mechanic that rewards how daring you are with damage and health pickups the closer you get yourself to the enemy. However it is ruined by the fact that the enemies seem to be made out of unexplodium taking, in some cases, dozens of point blank explosions to the face in order to be finally done in.

This would be acceptable if the game didn’t so often lock you into small arenas and then force you fight waves of enemies, segregating what could have been an interesting combo-based action-platformer into it’s constituent parts. Parts that have an uncomfortable tendency to drag during a level.

The room based puzzles, more comfortable territory for the makers of Stealth Bastard, are mostly pretty cool and based around physics puzzles and explosions. Generally these take the form of either elaborate block puzzles or things involving redirecting missiles. Both are impressive but suffer at the hands of a physics engine that can be more than a little unstable at times, leading to boxes becoming stuck in walls or escaping into bits of the level you can’t access. I’m sure enterprising people could turn this into speed run fodder but in normal play it happens just often enough to be frustrating. 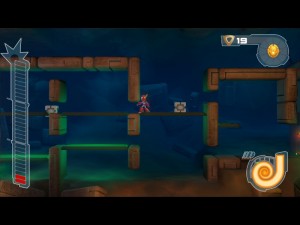 Finally, there is the exploration aspect. This is the factor that kind of spices up the corridors between puzzle rooms and combat areas, and probably my favourite bit of the game. It allows for some cool Metroidvania style tricks in order to reach certain pick-ups, of which there is money, Explodicons and power ups that boost how quickly you can explode. Hunting for Explodicons is one of the time when the game felt more like a homage, with some clever tricks and item placement, using all of the map, and occasionally even going off the screen, in order to really outfox the player.

The game is so very nearly there. Some of the weirder bugs they’ll likely patch out later, including the weird physics and the odd nature of the V-Sync, which seems to cause problems at least on slower hardware. The game is really fun for a good chunk of the time and when the level design allows all the elements to coexist, you do get that retro joy of having to solve several problems at once with glorious explosions. Some of the design choices are concessions to modernity and whether you can stand the trends of modern game design will probably affect how much you like Explodemon.

There is a great game in there but you will need to wrangle to get at it. Wrangle like a firecracker laced baboon! 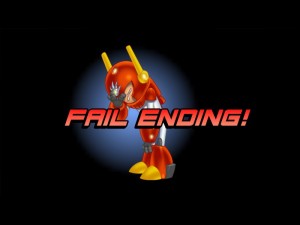