Very easy to lose yourself in this game (I swear it was light when I started reviewing)
No differences to the four characters other than skins
Can get a little repetitive, but forgivable because it's still fun

It’s been a very busy few weeks for me. I’ve been running around a field fighting orcs, I’ve been on jury duty fighting orcs and now I’ve been exploring a 2D haunted house fighting…..orcs? Well, ghosts of orcs, maybe.

This is Extreme Exorcism, an Indie 2D platforming shooter from developer Golden Ruby Games and publisher Ripstone. Described as a “Paranormal Platformer”, I knew from the beginning that I wasn’t in for my standard run of the mill indie experience and I was not disappointed. 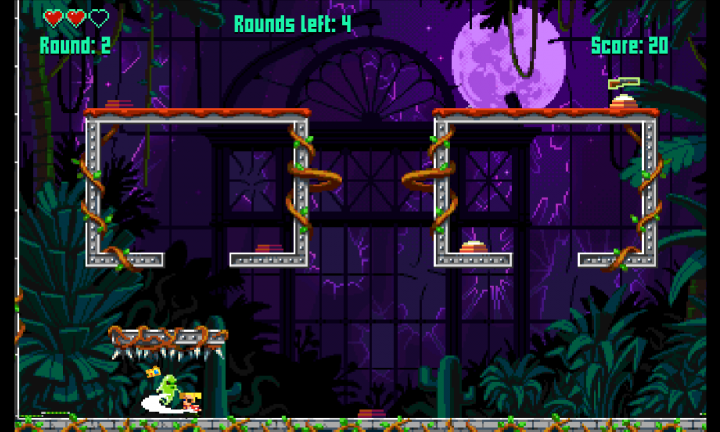 Well this is where it gets a little bit more complicated. At the start of each level, there is just the one enemy. Once killed, a new round begins and you respawn, along with a ghost. This ghost will mimic your actions from your previous round. You got a little bit trigger happy trying the new guns? Guess what, this is an equally trigger happy ghost after you. If you beat this ghost, the next round starts, this time spawning two ghosts. Yep, you’ve guessed it, this new one copies your previous round again, so you have two mimics. Beat the newest one (marked by wearing a crown) to end the round, or beat them all to rack up the points. 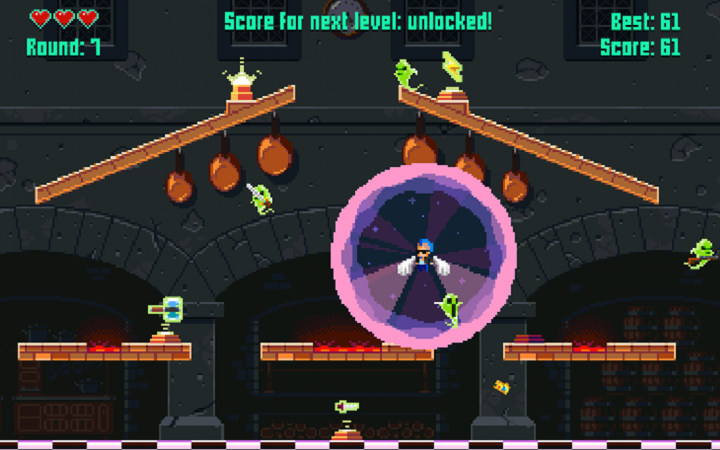 The Archangel Wings are a localised ghostbusting black hole!

You can imagine then that this game grows increasingly more complicated the more ghosts that spawn, each one copying not only your previous round’s moves but your arsenal as well (more on that in a moment). This leaves you not only thinking about how to deal with your current level, but thinking about how best to move around to make future levels more manageable.

As well as this, each room comes with its own unique obstacles to manoeuvre around, such as moving bookcases in the library or bouncy ectoplasm in the graveyard, each of which gives a very fun platforming element to the game and adds further complexity when planning your strategies; you literally have to think rounds ahead.

Now, as mentioned, this game has a wide and varied arsenal of weapons. From the mundane basics like the club and the sword to the mental, like the ricochet gun – a gun that shoots balls of energy that will bounce a few times before vanishing unless they hit a ghost, Extreme Exorcism offers up a vast range of ways to unleash havoc. I have played this game a lot since getting it and I don’t think I’ve even unlocked every weapon, but this game even has dive kicks… DIVE KICKS!! Think about that for a moment. This game lets you literally kick a ghost into the afterlife. 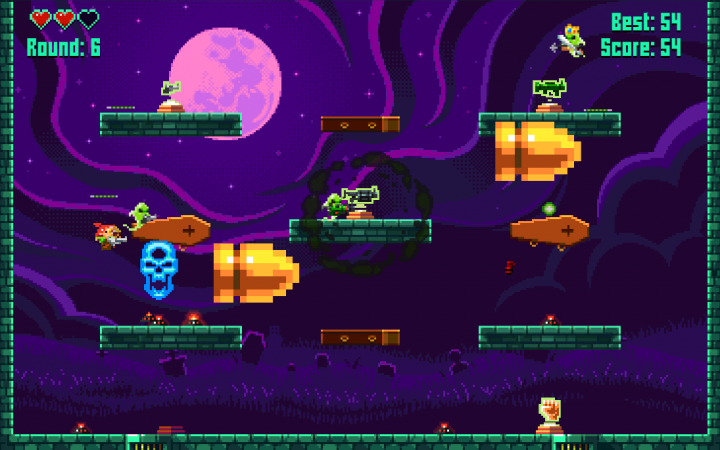 Not even Hellboy used bullets THIS big!!

Graphically, the game heralds back to old school platforming titles like the Mario Bros. game on the ZX Spectrum (What? I had my brother’s old hand-me-down as a kid) and looks very reminiscent of NES and SNES titles with the simple colour palette and charming sprites.

From a gameplay perspective, firstly, I played this on PC, so as well as having controller support I also checked to see how the keyboard controls operate and actually, they’re really nice, using the arrows to move and Z to fire (obviously you can change these). Now, I prefer using a controller, and with this game being on consoles as well, you can tell that it is designed to be played this way, but the keyboard works just fine.

Overall, this is an excellent little time sink and holds itself very well on the indie market. Extreme Exorcism is released tomorrow, Wednesday 23rd September and will retail at around £13, which I’d say is well worth it for its replay value alone.

And yes, it has local multiplayer, so you can get your friends around for a classic evening of gaming and smack talk!

Until next time, I have been and will probably remain, Craig.