previous
Iron Maiden's Speed of Light video is like a gaming retrospective
random
next
Reliving the past: "The Immortal" (Sega Genesis)
Video Games & Tech
0 likes

I’m aware I’m a little late to the party here. But Fallout: Shelter has only recently hit the Android market and has been destroying me ever since. You see, as with most of the Fallout games, Shelter seems determined to make the post-apocalypse as harrowing as possible even if, in this mobile iteration, said post-apocalypse is cheerfully animated in cartoon form. Somehow the cuteness of the aesthetic only seems to make things that much more horrifying. 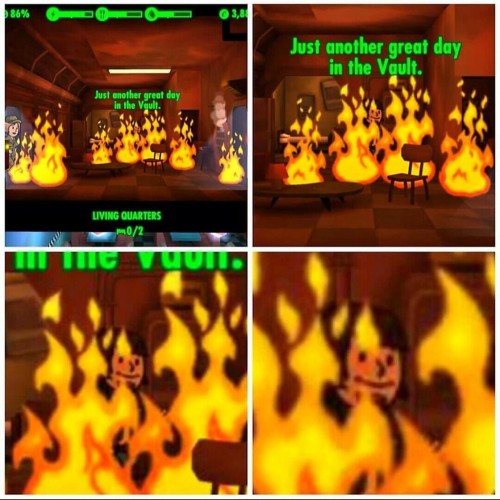 There’s a phrase that’s been used over and over again in apocalyptic/post-apocalyptic media, namely the idea of surviving not living. It’s the notion that, in the ruins of the former world, is it worth it to just be hanging on by your fingernails. It’s pretty much the dominant theme of The Walking Dead, with each safe place the group finds being revealed to not actually be that safe and their efforts to make it so usually failing. It’s almost kind of cliche now but, as with most cliches, that’s because it’s got a basis in truth. And yes, the reason I’m bringing it up is because it’s been my current experience with Fallout: Shelter.

I am aware that I’ve screwed up in the game. In fact, I’m pretty sure I messed up at the very beginning with the way in which I decided to build and assign my Dwellers. As a result of my mistakes, several of my Dwellers are dead and the rest are pretty much constantly on the brink of both starvation and fatal dehydration. I’ve been overrun by radroaches, invaded by raiders and had more fires than I can count. To be honest, it’s kind of amazing that any of my Dwellers are still going. I mean they’re miserable, hungry and thirsty but they just keep plugging away, working their stations. Their tenacity is somewhat amazing. 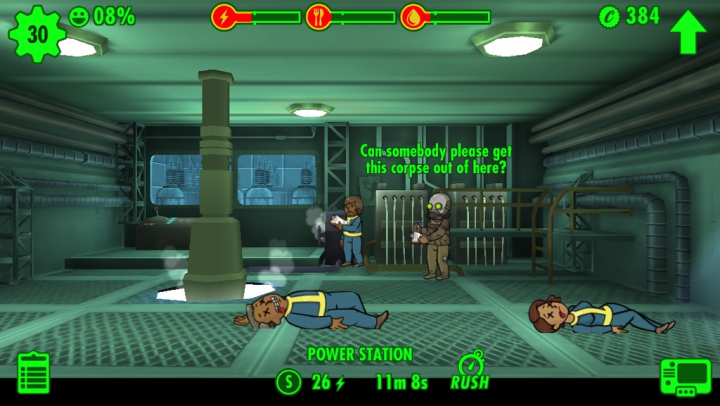 The thing is though, their refusal to die is kind of bugging me. At this point, I’ve pretty much given up on my first attempt at managing a Vault. I occasionally go in to collect the power, food and water they’ve prepared but, for the most part, I’m not a particularly attentive Overseer. And that’s something that should really be more of a problem for the Dwellers. One of the more brutal parts of Shelter‘s gameplay is the fact that there is no automatic collection performed by the game. Each module produces their resource at a certain time but if you, the player, are not actually on the game, that resource will just sit there until you return. So if you don’t have any stockpile and don’t click on that food for eight hours, your Vault will begin to starve. Although, I’m just assuming they die of starvation. It would make sense. Everything else seems to kill them. But, until they die, I can’t move on. It doesn’t feel right opening up a new Vault with the broken remains of my previous effort still just about ticking along.

Thinking about it, it’s probably for the best that I’m not actually in any sort of position even approximating responsibility for someone else’s life. Because it turns out I will wish them dead if it gets too hard. And Shelter is, kind of, hard. It’s obviously supposed to have that element of hardship that is crucial to Fallout games and, to a degree, what makes simulations like this kind of interesting. I’d say the real root of the problem I have with this difficulty though, is the ease with which you can get stuck in a rut because of it. I made mistakes that led to where I am in the game but, it’s in no small part due to the game’s design that I can’t escape this horror. And it’s sort of what’s causing me to question how much I actually like Shelter. Not in a bitter, “I suck at this so the game sucks” kind of way, but more in just a general questioning of whether the Fallout model works when dealing with a model of game that is fundamentally intended towards a more casual playstyle. 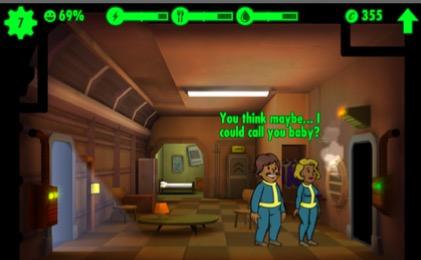 Think of something like Tiny Tower. There’s a similar core mechanic to it, in that you oversee a building comprised of various different modules, each of which produces a different resource and are staffed by your residents, each of which has a skill set that sees them better matched to certain modules. The difference is that Fallout: Shelter  has added a load of hellishness to this formula that forces you to dedicate way more time and effort to something that should really be a game you pop onto every now and again to collect some coins. I should not have to stress over the fact that, because I haven’t looked at the game in half an hour, my Dwellers may be desperately crying out for food.

So, Fallout: Shelter, I don’t know how I feel about you. I know you are consuming of all time and hope. So maybe you’re an envoy of the Dark Lord, Cthulhu. Maybe you’re just a well designed mobile game that is determined to consume its players. Either way, you’re hard and you’re keeping my Dwellers on the edge of living in such a way that frustrates the hell out of me. So, I dunno. I guess I’ll just let them die and start again. Because this isn’t living. We’re barely surviving here.