If you’re a fan of 80s action movies, then Far Cry 3: Blood Dragon is the game you need. A downloadable, stand alone, single player, which uses the Far Cry 3 engine and pays homage to films of the 80s.

The year is 2007; it is the future (from an 80’s perspective anyway), and Earth has been ravaged by a nuclear war and new paths for peace must be found. A U.S. cyborg army may have found a solution; a powerful bio-weapon on a distant island.

You take the role of  Mark IV Cyber Commando, Sergeant Rex Power Colt ,voiced by 80’s action star Michael Biehn, who is best known for his roles in the Terminator and Aliens films. Colt has been sent over to gather information and figure out what the hell is going on.

Sadly, the cut-scenes don’t involve cartoon footage as shown in the trailer; it appears that was just for promotional purposes (shame). Instead, the story cut-scenes have been done in a 16-bit era style but with audio over them, instead of text, which cart-based games of the time were limited to; still pretty cool. 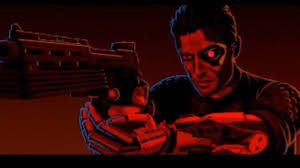 If you’re expecting this game to be like Far Cry 3, then you may be disappointed (Matt Walklate’s FC3 review can be viewed here if you want to know more details on that one); It’s mainly the theme and story which have changed.

It’s still set on an island but it’s always dark with bright neon lighting on almost everything. It’s still free-roaming, with garrisons to liberate,  hunting and hostage missions, which are scattered around the map. The vehicles are identical to Far Cry 3, as are many of the weapons, but the latter can be upgraded to use lasers as well as other enhancements and cyber/mutated versions of the same animals are also there. 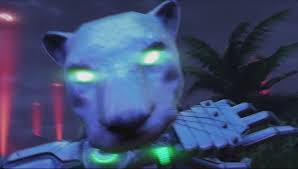 There are few new touches, like when you silently takedown an enemy, you have the ability throw a shuriken instead of a knife at another enemy if they’re nearby. It’s pretty cool, but you have to be really quick in order to pull it off.  In-between some missions, there are some on-rails shooting galleries, most commonly involving using a mini-gun from a helicopter and generally, everyone’s favourite cliché , the exploding barrel; this makes for a great action film-esque experience.

The best addition though is the blood dragons. Their design may not be what you would usually associate with a dragon, looking more like dinosaurs with neon markings, but it’s more about what they add to the game-play. Like the T-Rex in Jurassic Park, they react to movement and in order to survive herds of them, you will need to crouch while moving and hope their makings don’t change colour.

These hulking beasts can, though,  be used to your advantage when you assault enemy posts; if you can manage turn off the force field barriers first that is. You can throw cyber hearts collected from dead enemies and lure them into the base, where they’ll kill your enemies for you; or at least take the heat off a bit. Later in the game, some will be wearing a device called a brain cage, which means that they will attack you but not the enemy, unless you can destroy the cage first. 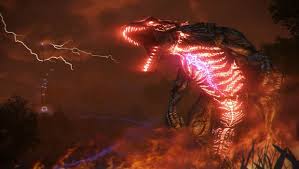 As with Far Cry 3, there are quite a few different ways to liberate a post, and adding the dragons means that doing this several times during the game doesn’t get too repetitive.

As you might expect from a downloadable title, some areas have been stripped down to meet the asking price; the island is much smaller than that of Far Cry 3, which I was happy about as I found the free roaming part far too repetitive. There’s also no crafting, but, there are weapon upgrades instead, and skills cannot be chosen, you just gain extra abilities as you level up; all of which means you get a far simpler game with stronger focus on the action. 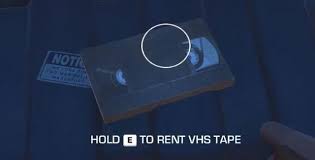 There are also archive files, CRT TV sets and VHS tapes to collect, not that they matter much, though. The VHS tapes do have some mildly amusing made up titles, complete with a film description; the files add a bit to the story and I think collecting all of the TV sets is supposed to unlock something ? Collecting all of these gives you more of a reason to explore; if you buy maps with the credits you find you can see the locations of any collectibles in those areas, but some require finding a cave entrance or ledges in order to get to them.

If you complete all of the side missions, collect all objects and liberate all of the posts, in addition to the story missions, you should get about 7-8 hours out of it, and seeing as the game will only cost you £12/$15, it’s not a bad size and you get a fair amount of  bang for your buck. 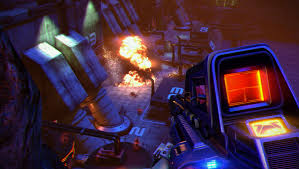 As well as being a homage to 80s action films, it is also a parody and there’s a strong focus on humour throughout the game. During the tutorial your character will make fun of it being so patronising and intrusive, as if retro games are commenting on modern ones. Also, as you would expect of anything based on films of this genre and era, there are plenty of cheesy one liners, even though not that many of them are very funny. Some reference well known songs; when you level-up, you may hear “I’ve got the touch, I’ve got the power!” and getting an explosive multi-kill may result in the line “It’s raining men!”  and for cartoon fans, there’s a side mission where you need to kill four turtles and surprise, surprise…they’re all wearing coloured bandanas.

My favourite thing is probably the music, with many tracks using a lot of synth and a heavy bassline and others with a soft rock style. Most of them sound very familiar; one in particular sounds like it’s been lifted directly from The Terminator. All of them really give the game an authentic 80s feel. 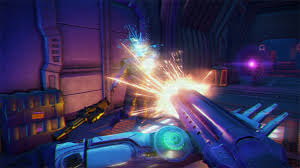 This game is mainly focused on nostalgic references rather than giving you a completely new experience. Although it can be a little repetitive in places, it’s great fun for the most part, and for a few quid, it’s definitely worth getting. This is one of the best download-only titles to be released, especially for consoles. Go get it!