It’s not every day you get abducted and jacked into The Matrix Mainframe, forced to battle it out with others to get back to reality. It’s even less common for those abducted to be scantily-clad, big breasted beauties with psychic abilities. Oh… this is a fighting game? Well then this is prettymuch just a day ending in “y”.

Girl Fight comes from developer Kung Fu Factory, and the title prettymuch does exactly what it says on the tin. Eight Girls using different martial arts techniques, combined with “psionic” abilities fight each other.

In terms of storyline, you’re not exactly going to be scratching your head over plot twists or convoluted exposition. A shady company (there’s always a company doing nasty stuff!) called “The Foundation” has acquired “test subjects” in order to weaponise their psionic abilities. With a distinct lack of morals and funding that would make Tony Stark blush, The Foundation have plugged the coincidentally all-female cast into a computer simulation called The Mainframe. The ladies are then forced to face-off in one-on-one bouts of combative competition in order to obtain their freedom.

Okay, so fighting games aren’t known for their profound story – it’s all about the gameplay, baby! If I were to compare Girl Fight to another title, the closest game that’d come to it would be Dead or Alive. However, it does lose out in certain areas.

Graphically, Girl Fight is quite appealing. It doesn’t quite have the graphical panache of Dead or Alive or Tekken, but for a download-only game it’s pretty damn good. Some nice particle effects, and buttery-smooth animations make the game good to look at.

Some of the backgrounds and fighting arenas are a bit spartan, but with a dystopian backdrop there isn’t going to be much going on anyway. You’re not going to have other sprites or onlookers in the background, but you will have burning buildings, large War of the Worlds-style tripods or sometimes bomber planes flying overhead as you duke it out in the dilapidated ruin of an old church. 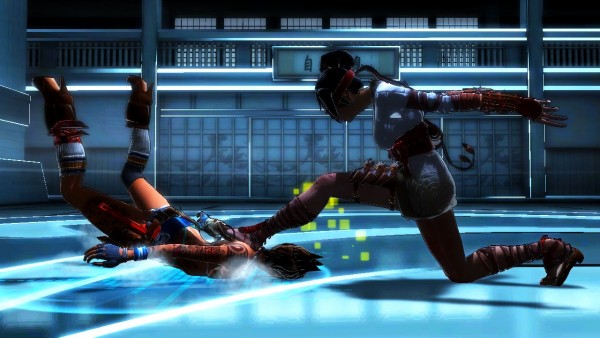 Why yes… I’d love to lick the floor. Thank you for your assistance.

There’s a suitably Matrix-esque tinge to the graphics, with the impacts being accompanied by code-like particle squares and flashes.

The character design isn’t bad, despite looking like a teenage hormone-driven boy came up with the sprites. All the girls are rather buxom with “junk in their trunk”, and wearing as little as possible to maximise the side-boob & bum shot opportunities. Some characters have very short skirts, tight-fitting lycra or even leather BDSM-style outfits. Unfortunately there is some laziness in the character design, as when you’re playing you’ll notice some characters looking nearly identical, save the outfits – Daisy and Chaos for example.

One thing you’re going to groan at though are the character names, which are typically based on the outfits they wear. To give you a few examples… Warchild wears a military uniform, Shogun has a skimpy samurai outfit, Chrome wears metal armour, Wrench is a mechanic with… yep, you guessed it… a wrench. You get the idea. 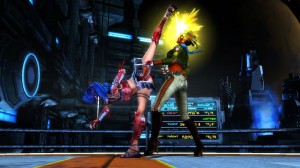 The camera makes some quite nice swooping movements when certain abilities are used like throws or special moves, though these can be a little quick and sometimes disorientating with some of the more acrobatic events.

These manoeuvres are often accompanied by a bullet time-like slow motion effect to accentuate the gravity of the actions at hand. This works well to make the impact more visually appealing, but it happens way too often.

Unfortunately when you’re caught in a corner by an opponent, the camera can sometimes magically switch so you’re attacking from the other side without warning… so if you’re mid-combo this can be quite frustrating.

The sound effects are minimal, with high pitched grunts and yelps from the girls as they punch, kick and get smacked in the chops. Some characters have very high-pitched voices (Chaos), so their yelps do irritate a bit. The music in the game is quite a generic, dirty techno electric rock/pop mix… this isn’t bad, but it’s not good either.

The gameplay in Girl Fight borrows heavily from the Tekken series, and some moves could almost be mistaken for being completely lifted from the games. Some of the spinning kicks and low-to-high kicks look like they’re nicked from Michelle or Julia Chang’s characters. The great thing is they’ve chosen a good model to take inspiration from, and Kung Fu Factory have done a good job of emulating it.

The left analogue stick or D-pad is used for movement, and the square, X, triangle and circle buttons are your punch, kick, grab and defence options respectively. The shoulder buttons and/or triggers are used to activate your “psi-amps”. Then there’s obviously the double tap forwards to run. Finally you can use the grab button (triangle) combined with either back, or down on the D-pad to do a counter, or a low counter.

The countering system isn’t as forgiving as I’d like, and it will punish you if you’re not timing these with absolute precision. However if you can get this down, then it’s prettymuch an I win button. 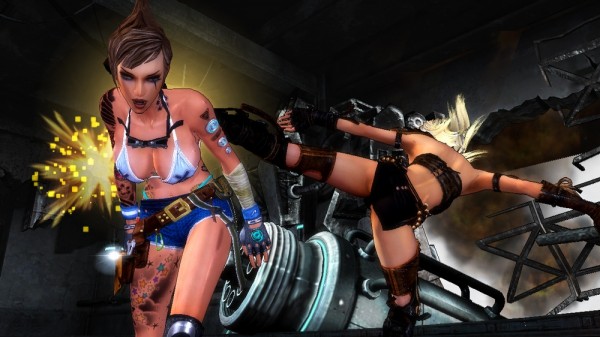 Wrench takes a boot to the back… serves her right for looking in the wrong direction really!

There are no ring-outs – the battleground is encased in an invisible cube that only becomes apparent when you or your opponent are smacked into it. This fits in nicely with the artificial reality aspect of the story, so didn’t bother me at all. In fact it made me reminisce about by former Virtua Fighter days.

Movement works exactly the same way as the Tekken games, even down to the sidestep mechanic for dodging. As far as combos and attacks in general, these are decent enough, but the only moves that convey the impact well enough are the holds and throws. Kicks and punches just feel like you’re slapping someone, unless you’re performing a knockdown move.

Where Girl Fight stands apart from it’s older, wiser fighting game siblings is the aspect of the psionic abilities. This harkens back to games like Psychic Force, but a little less fantastical. For example – you can leach the life force from an opponent, or activate a Steel Skin or Flame Body, and even emit blasts of psychic energy to damage your opponent. 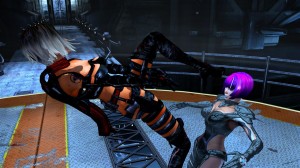 Chrome looks distracted by… something.

Each ability has it’s own category;  “Psiphon” abilities are the leaching powers, allowing you to steal life or psi power from your opponent.

“Illusion” abilities let you phase to avoid damage, or lower your opponent’s defence to make your next hit more powerful.

“Attack” abilities include the Mind Blast and Seismic Fist attacks… the latter being a ground punch attack that knocks your enemy over.

Finally the “Xform” category gives you the steel or flame skin that I mentioned earlier.

When you activate an ability, you’re greeted with an accompanying graphical effect… the leach abilities make you turn green when you leach health, purple when you leach psi power, the steel skin and flame body powers are pretty self explanatory though.

The use of these abilities isn’t always necessary in a fight, but you’re guaranteed to need to start using them more and more as you get towards the final boss. I found that once unlocked, the instant knockdown of the Seismic Fist ability helped more than anything else, which I prettymuch used constantly on the boss (and even then she dodged or blocked it, making it useless).

In terms of customisation, you’re able to swap out your psi abilities before you start playing… and you can choose a maximum of two. As you play you’ll be rewarded with Combits or CB… and you can use these in the shop to unlock more psionic abilities, or skins and outfits (yes… the more you pay, the skimpier the outfit gets). When you play ranked online matches you can wager Combits, but obviously run the risk of losing them in the process.

As far as game modes go, there’s the usual mix including arcade, versus, training and online play. You can also view leaderboards to see exactly just how bad you are in comparison to the rest of the world that’s playing.

When you first take a crack at the arcade mode though, you’re limited to only using Warchild, which is a little odd. What’s more frustrating is that the end boss (Chrome) will let you win a round, but then proceeds to avoid every single attack and special you use on her… it really reminds me of the old-school fighting games where the bosses used to “cheat”.

I keep retrying Chrome, but she whoops my ass every single time, no matter what tactic I take. What’s more annoying is that if your selected loadout of psionics isn’t good for you to beat her, the only way to swap them out is to quit to the main menu, and retry from the start. 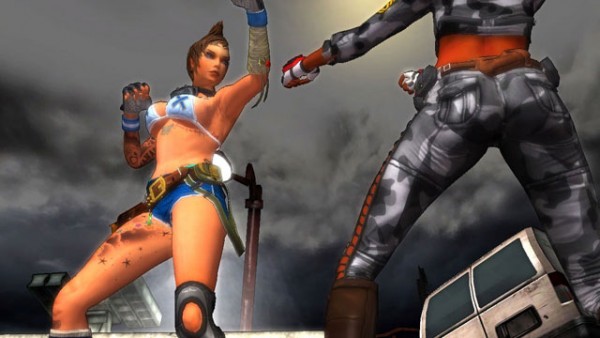 In conclusion, there’s a lot that bugs me about Girl Fight in terms of camera switching, copy/pasted sprites  and ludicrous difficulty spikes with the boss… but is it a bad fighting game because of these things? No it’s not. Girl Fight is a well-polished title, which rewards  persistence and precision timing. It’s good to look at, despite it’s obviously overly titillating nature, and can be fun playing versus friends or online too.

However does it have much in the way of replay value? Well… there’s characters to unlock in the Arcade mode, as well as outfits and artwork to appeal to your boobtastic requirements. Aside from that though, there’s not much. These things coupled with the soulless attempt at a storyline make the game decidedly average when you have free to play titles like Tekken Revolution available. However if you’re a hardcore fighting game fanatic and completionist, this will definitely have it’s appeal. With the relatively low price tag, you can do worse.

Girl Fight is available on PSN and Xbox Live now.