-Some repetitive gameplay features
-Great, but limited, soundtrack
-Heavy on the micromanagement

Despite a few limitations Halcyon 6 delivers an entertaining duo of sci-fi geekery and an homage to classic RPGs.

FTL is to Star Trek as Halcyon 6: Starbase Commander is to Deep Space 9 – or Babylon 5, if you’re more that way inclined. But in either case the game puts you in command of an alien space station, tasked with the survival of humanity, battling hostile aliens and managing petty political squabbling between factions.

In the opening moments of the game you assume command of an ancient and mysterious starbase when your commanding officer nips off in the twelfth fleet to answer a summons from the Terran Federation. The fleet – along with much of the rest of humanity – is unceremoniously wiped out by an alien menace known as the Chruul, and it’s up to you to pick up the pieces of civilisation and bring the battle to the galactic interlopers. 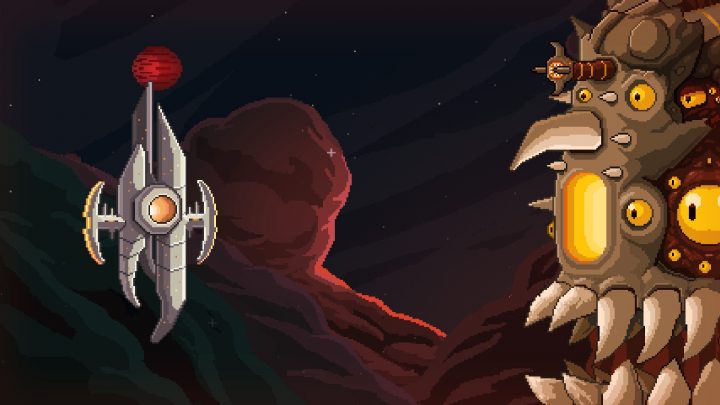 The first thing that strikes you about Halcyon 6 is the art style. I am desperately, head over heels in love with the graphics on this game. Modern titles with a retro style always tickle my fancy, but this goes one step beyond. From the fleshy Chruul ships to the enormous hulks the humans can eventually construct, each ship model has been lovingly crafted – and set against the jaw-dropping backdrops, I could frame every moment and hang them up on my wall.

The audio comes a distant second to the graphics; the soundtrack is excellent, but there just isn’t as much variety. And when you’re playing a game like this for hours, hearing the same loops for the hundredth time can start to get a bit repetitive. 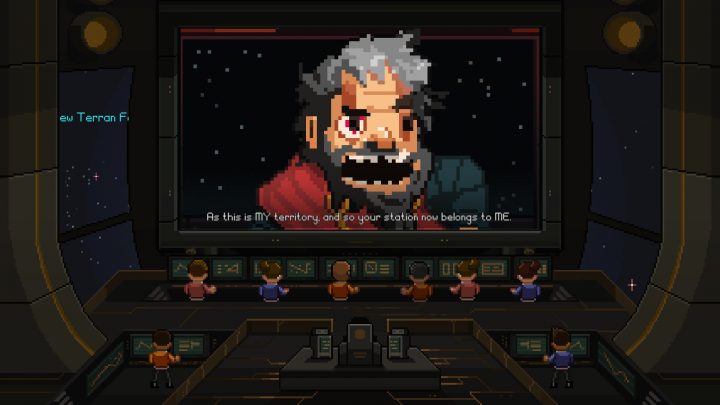 Also on the repetitive side are some elements of the gameplay. There are a number of different aspects to this game, all of which run the risk of becoming tedious. As your fleet grows and explores the ragged remnants of humanity scattered throughout the sector, you encounter outposts that will supply you with resources – if your ships go and pick them up. Each and every time. Repeatedly.

The other possibly tedious aspect, heartbreakingly, is the combat. There’s a fantastic RPG active-time-battle style of combat in Halcyon 6, which feels like it would be right at home in a science-fiction themed Square game in the nineties. At first it’s joyous; each ship has a different abilities that can cause damage or heal, as well as cause status effects to enemies. Things become more strategic when you start to unlock abilities that also exploit enemies afflicted with other status effects, causing extra damage at the cost of removing the negative status effect. Basically, it boils down to a trade off between battling enemies with weakened stats over time, or by causing extra damage in the short-term. 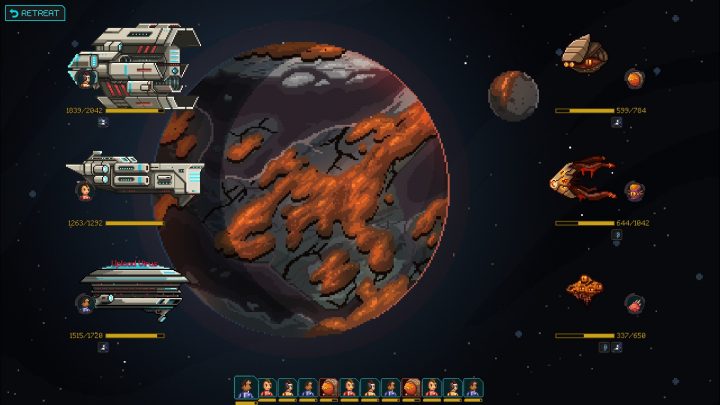 The real issue with this is that the range of abilities isn’t that great, so you might want to keep an enemy weakened, but have no choice but to remove the status effect because of your ship’s limited range of abilities. Other RPGs have an additional equipment system in place to mitigate this, making the choice of abilities more versatile. Halcyon 6 attempts to plug this gap by having a skill set per ship class as well as by each vessel’s commanding officer, but conversely severely limits your ability to have many of either, making the whole system quite inflexible over time.

The contrast of having ships battling in a futuristic setting using a classic system is such an entertaining and striking one that this inflexibility might not even matter. And it’s only one of several complementary systems; as well as managing the transit of your ships on the map screen, there’s also a base management system for constructing extra rooms and abilities on your starbase, as well as basic research and diplomacy systems.

Despite its shortcomings, Halcyon 6 has far more going for it than against. The premise is basic but there’s a powerful range of factors at play here, which are greater than the sum of its parts. It’s a slice of classic RPG action wrapped up in a fantastic setting. It’s addictive, challenging and funny all in the right quantities; if you can get past its limitations then you’ll enjoy many hours commanding Halcyon 6. Find out more at their site or buy it on Steam.

UPDATE: Massive Damage have continued to patch and update the game since this review was completed, including features like automated resource collection and ship customisation.