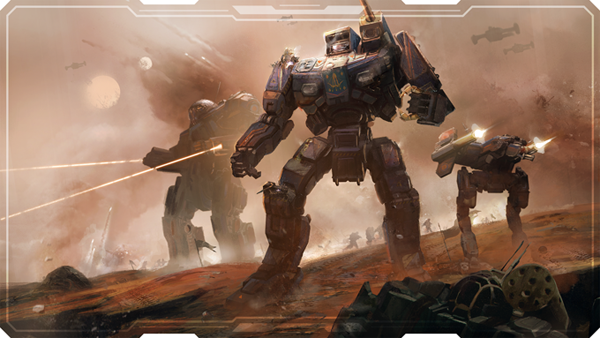 Jordan Weisman and Harebrained Schemes, the team behind the several critically acclaimed new Shadowrun games amongst others, have set their sights on a new target – Battle Tech.

Originally created by Weisman in the early 80’s as a tabletop game featuring miniatures Battle Tech is set in the far future of 3025 and the Succession Wars Era. Set in a region of space known as the Inner Sphere numerous noble houses are in a pitched battle for dominance amidst constant war fare and feudal political intrigue. The noble houses do battle with 30 foot tall heavily armed humanoid armoured combat units called BattleMechs

Battle Tech has since been explored via various media including a pen and paper RPG named Mech Warrior, numerous novels, animation and a variety of computer games including the 90’s hit Mech Warrior 2 and the more recent Mech Warrior Online.

This new game, the first turn based game set in the classic Battle Tech world on PC for over 20 years, will be a single-player, turn-based, tactical ‘Mech combat game where the player will take on the role of a leader of a mercenary outfit hired by one of the noble houses to pilot Mechs. Much like their campaign for Shadowrun: Hong Kong Weisman and the team at Harebrained Schemes already have the funds to make a basic version of the game featuring skirmish battles against A.I across a variety of maps. They have big plans for the game if they get the necessary funding though with a single player campaign, expanding said campaign and PVP multi-player set as stretch goals.

Unsurprisingly given their track record and fanbase their latest crowd funding endeavour has already smashed its initial goal of $250,000 in an hour with 35 days to go and is sitting at over $830,000 at the time of writing this piece.

Pledge levels range from $1 to $10,000 (but the limited $10,000 level is already gone, no seriously) with a copy of the game via Steam,GOG, Humble and a noble house wallpaper costing a rather reasonable $25( that’s £16 and change for the English folks).

For more details check out Battle Tech on Kickstarter here.